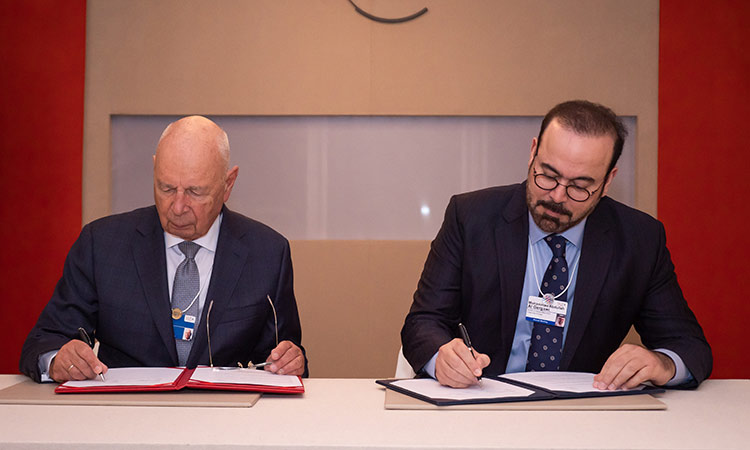 The partnership agreement was signed by Mohammad Abdullah Al Gergawi and Klaus Schwab.

The agreement aims to boost the exploration of future opportunities, while augmenting integration and cooperation in supporting global efforts to achieve mutual objectives and develop comprehensive future plans and strategies.

The UAE-WEF Sustainable Global Strategic Partnership was unveiled during a high-level meeting between Mohammad bin Abdullah Al Gergawi, Minister of Cabinet Affairs, and Prof. Klaus Schwab, WEF Founder and President, on the sidelines of the WEF Annual Meeting in Davos, Switzerland.

Mohammad Al Gergawi highlighted that the UAE is positioning itself as a hub for positive future change, through the insights of President His Highness Sheikh Mohamed Bin Zayed Al Nahyan. He added that the new partnership agreement embodies the directives of His Highness Sheikh Mohammed Bin Rashid Al Maktoum, Vice President, Prime Minister and Ruler of Dubai, to enhance the position of the UAE as a hub for future government practices, and a platform for pioneering partnerships that inspire futureproofing.

He said, “The UAE government is committed to designing new work models, which support futureproofing governments and improve societies’ lives as a whole. This can be attained through focus on the foundations of proactive strategic thinking, comprehensive plans and renewable systems to design and advance future policies in line with the global developments. The UAE plans to realise this through steadfastly sharing its advanced model for future forecasting and futureproofing, along with enhancing government resilience and readiness.”

He noted that the strategic sustainable global partnership agreement between the UAE Government and the World Economic Forum reflects the UAE’s continued commitment to promoting comprehensive development and realising its objectives. This can be accomplished through inspiring and supporting global governments; enhancing their current capabilities and developing them to ensure their readiness for dealing with future challenges and creating an integrated ecosystem of opportunities.

Prof. Klaus Schwab praised the joint efforts of the UAE and the forum, which contribute to strengthening the global capability to deal with challenges at various levels by utilising technology and innovation.

He said, “The United Arab Emirates shares a remarkable vision of innovation for the global common good. The World Economic Forum is proud of our many partnerships together which aim to mobilise public and private sector action to address global food security, climate resiliency, trade innovation and responsible technology innovations as some of the world’s most challenging issues.”

The UAE-WEF strategic sustainable global partnership agreement strives to support and boost cooperation and integration through four main pillars: the Centre For The Fourth Industrial Revolution UAE; reinforcing public-private sectors partnerships; supporting the participation of UAE ministers and government officials in meetings, conferences and events organised by WEF regionally and globally; and launching a special summit that focuses on future opportunities and defining challenges for which the world must prepare.