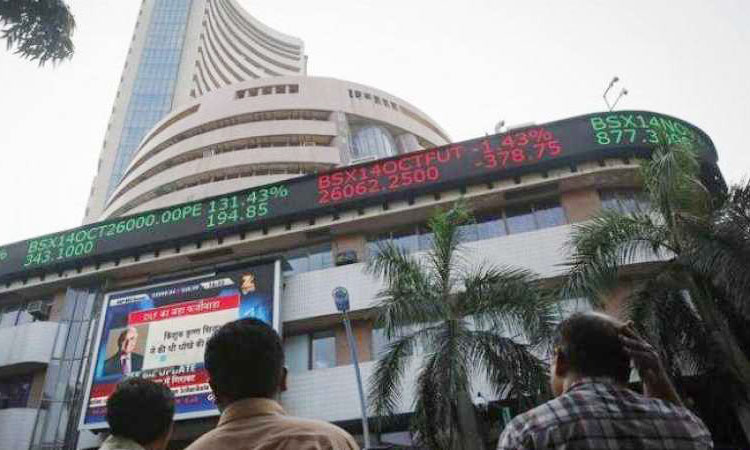 A general view of the Mumbai Stock Exchange. File

Equity investors lost over Rs5 lakh crore (Rs5 trillion) on Thursday as indices took a deep plunge due to the persisting high inflation in the US, below expected corporate earnings, amid fears of high inflation in India for the fourth straight month in April.

Market cap of all BSE-listed firms fell by Rs5.25 trillion to Rs241.10 trillion against Rs246.31 trillion in the previous session.

The Indian indices extended their fall for the fifth straight session on Thursday.

It was widely expected that the inflation print would above RBI's 6 per cent upper band for the fourth straight month.

The Indian rupee dived to a fresh record low of 77.63 mark, wherein a slew of factors has conspired to push the domestic currency on a downwards trajectory.

"Elevated crude prices, global uncertainty amid the war in Ukraine, mounting inflation, and prospects of an aggressive monetary tightening path by the US Fed have been the major headwinds for the domestic currency," said Sugandha Sachdeva, Vice President - Commodity and Currency Research, Religare Broking.

Additionally, relentless foreign fund outflows from the equities and the greenback climbing to a two-decade high have also been the key catalysts behind the recent slump in the rupee-dollar exchange rate, added Sachdeva.

"Risk sentiments have soured as the market participants are fretting that an accelerated pace of rate hikes would derail global economic growth."

However, likely RBI intervention to stem the fall in the rupee led the domestic currency to erase some of the losses. Considering the backdrop, Sachdeva foresees the Indian rupee to trade in a range of 76.80-78.50 in the near-to-medium term.

MSCI's ex-Japan Asia-Pacific shares index rose 0.2%, a day after it hit a two-month low while in Europe, the pan-European STOXX 600 index fell 0.3%.

Shares rose in Hong Kong and Tokyo but fell in Seoul and Sydney. Shanghai didn’t have a significant change.