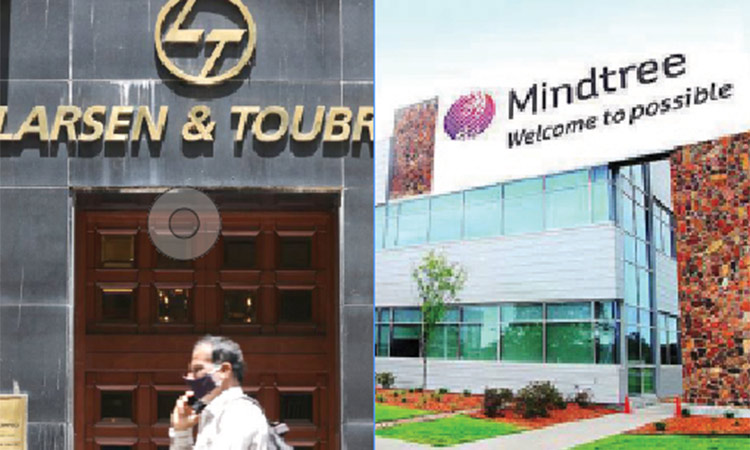 Shares of LTI ended Friday’s session with a valuation of $10.47 billion, while Mindtree closed at $7.24 billion.

Indian conglomerate Larsen & Toubro will merge its Mindtree Ltd and L&T Infotech software units to create a $17.69 billion company, building scale to compete for larger deals in a booming market for IT services since the pandemic.

Mindtree shareholders will get 73 shares of LTI for every 100 shares of Mindtree, LTI said in a statement on Friday, and the combined entity will be called “LTIMindtree”.

Shares of LTI ended Friday’s session with a valuation of $10.47 billion, while Mindtree closed at $7.24 billion.

“End of the year, with the size we will be, will qualify us to really be considered for over $100 million deals,” LTI Chairman A. M. Naik said in a press conference.

The combined entity “LTIMindtree” is expected to provide diverse strategic options and flexibility arising from cost efficiencies and synergies, said the companies.

L&T’s push for scale in the high-growth software industry follows a pandemic-led surge in demand for digitalisation, as global businesses invest billions of dollars in cloud-computing, digital payment infrastructure and cyber security.

Sector giants including Tata Consultancy Services, Infosys and Wipro have been securing larger contracts and upgrading their services at a time when India’s tech industry has surpassed $220 billion in revenue. Even as demand soars for software services, the newly minted company will have to face challenges including severe employee attrition and margin pressure from wage hikes and other expenses.

The merged entity will need about 20 per cent to 30 per cent more employees above the combined strength of about 80,000, LTI’s Naik said.

Larsen & Toubro acquired Mindtree in 2019, following a rare hostile bid for a controlling stake, the first such pursuit in India’s software services industry.

Before the merger, L&T owned a little over 60 per cent in Mindtree and a 74 per cent stake in L&T Infotech.

Analysts believe that the new merged entity will start on a strong foundation of growth as the combined total contract value (TCV) of both the companies at the end of FY22 was over $3 billion, but they are still skeptical on the timing of the merger.

Among the mid-cap players, both LTI and Mindtree have performed well for the fourth quarter of FY22 as well as for the full year.

LTI, which crossed the $2 billion revenue mark for the fiscal post its result reported that its streak of bagging large deals continues. The total large deal pipeline was at $2 billion of which 40 per cent came from net new logos.

Keeping in mind strong growth momentum, analysts tracking the sector were not too confident if this would be the right time to go in for a merger.

“L&T is on the horns of a dilemma, both Mindtree and LTI are performing better than the market and in fact they are some of the top performers in the market, they are both performing significantly better than the scaled competitors such as Infosys TCS and Wipro, hence a merger is highly risky,” opined Peter Bendor-Samuel, CEO, Everest Group, an advisory firm.

When asked the scale that the merged entity will bring on table, Bendor-Samuel feels that what looks good on paper may not be so in reality.

“The merger adds scale and broadens the customer base as well as positions collectively better in more industry segments. It is possible that a combined entity would be able to run more effectively and enjoy economies of scale as overhead would be reduced through integration.

However, these cost advantages do not always translate from paper to reality and the cost cutting can create poor morale which negatively affects firm performance,” he added.

For L&T, this merger fits in with the group’s vision of becoming more services oriented. The merger has business synergies as both the companies have complimentary portfolios. For instance, communications media & technology, and retail, CPG and manufacturing are bigger focuses for Mindtree. In case of LTI it is BFS and Insurance that are the largest vertical with 32.5 per cent and 13.8 per cent respectively of revenue for FY22.

While all this is true, there is one element which is a bigger concern, that is, the impact of the merger on the management. “Merger of these two entities is a foregone conclusion. However, with the growth momentum both these companies are witnessing, a merger at this time may not be good as it would defocus the management from capturing growth to managing merger complexities,” said Pareekh Jain, founder and CEO, Pareekh Consulting, an engineering consultancy services firm.