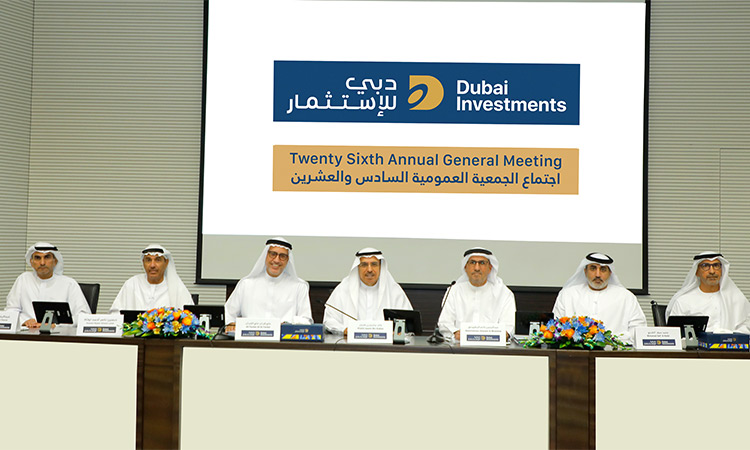 Top officials and dignitaries attend a meeting in Dubai.

Dubai Investments, the leading diversified investment Company listed on the Dubai Financial Market (DFM), has announced the distribution of 12% cash dividend to the shareholders for the financial year ending December 31, 2021. A proposal to this effect was approved by the shareholders at the Company’s 26th Annual General Meeting ( AGM) on April 11th, 2022.

The group reported profit attributable to the shareholders of the Company of Dhs619.49 million for the year ended 31 December 2021 as compared to Dhs347.55 million in the previous year. The 78% surge in the net profit was a result of increased revenue on the back of an improved performance by the Group’s business units.

Speaking at the AGM, Abdulrahman Ghanem Abdulrahman Al Mutaiwee, Chairman of Dubai Investments confirmed that the Group will continue to take a prudent approach in managing the diversified portfolio with the objective of divesting mature assets and maintaining liquidity. He also mentioned that the Company will continue to assess opportunities to grow the Group’s business, either through mergers and acquisitions or by expanding presence across the region.

The company’s shareholders approved all other resolutions presented by Dubai Investments Board of Directors at the Annual General Meeting.

Dubai Investments is a leading investment company listed on the Dubai Financial Market with over 15,944 shareholders, a paid-up capital of Dhs4.25 billion and total assets of Dhs22 billion. Incorporated in 1995, the company has grown exponentially with investments in several businesses across diverse sectors.