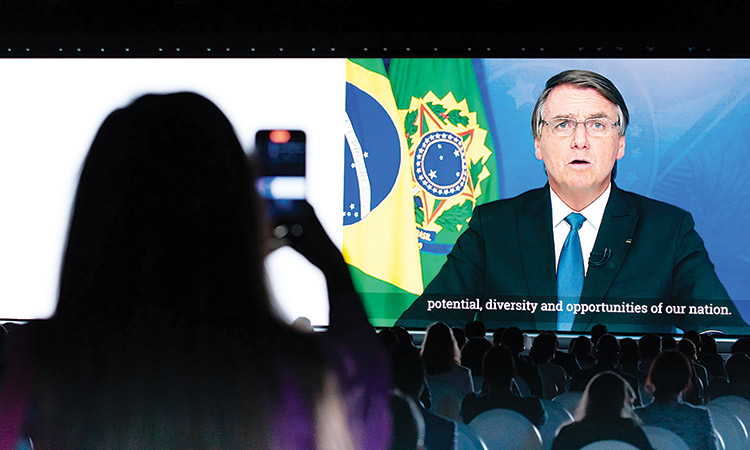 Jair Bolsonaro, President of Brazil speaks during the event.

tThere is vast investment potential for UAE businesses in Brazil as the country pushes ahead with new strategic policies and projects, Jair Bolsonaro, President of Brazil said as he addressed delegates at the Global Business Forum Latin America (GBF) 2022.

In his virtual speech, Bolsonaro invited UAE companies to invest in Brazil and explore the attractive business opportunities that are emerging across a variety of economic sectors.

Bolsonaro assured delegates that fiscal irresponsibility and spendthrift ways would no longer be problems and barriers to doing business in Brazil, adding that foreign investors can renew their confidence in his country’s economy.

“We are committed to Brazil’s economic openness, comprising a competitive insertion of our country in the new scenario that will mark the post-pandemic world. After all the challenges of the past two years, which have led us to direct a huge amount of resources to prevent a more severe social and economic downturn, Brazil has resumed the path of economic growth. After a contraction of 4.1 per cent in 2020 - one of the smallest among all countries affected by the pandemic - our GDP has grown 4.6 per cent in 2021,” he said.

Urging a note of caution with regards to expecting a continuous trajectory of economic growth at the same level, he stressed that measures taken to damp down inflation may have an impact, but that in the long run such actions would be beneficial to Brazil’s economy.

“The need to keep inflation under control will make it difficult for us to have the same result this year. We all know too well there is no sustained growth without a stern control over inflation. We have been working with utmost caution to guarantee the continuation of growth for the next years. We strive for growth with short, mid and long-term opportunities not only for the businesspeople present in this forum, as well as for the whole business community as well. I am here to reassure all of you: there will be no spendthrift ways fiscal irresponsibility,” he said.

Bolsonaro highlighted that in the last three years, the Brazil government has transferred 131 assets to the private sector, saying that this had the potential to bring about more than $150 billion in investments and around $25 billion dollars in concession fees. He said that the programme’s portfolio for 2022 comprises 153 assets, with forecast investments reaching up to USD 60 billion, and asked the audience to consider investing in his country.

“For these reasons and assurances, we invite you all to invest in Brazil. Besides our endeavours of cautious and sustainable economic recovery, we have been carrying out the largest infrastructure investment programme in our history and one of the largest in the world, the investment partnership programme,” he said.

“Among the ongoing projects, I highlight the privatisation of Empresa Brasileira de Correios e Telégrafos (Brazilian Post and Telegraph Corporation), the recent auction of 5G radio frequencies, and the concessions for sustainable use of national parks. We are determined to follow the path of sustainable development and to fulfil in its entirety our international commitments in emission cuts and elimination of illegal deforestation - there is no other way to prosperity,” he added.

He also highlighted the importance of renewable energy and biofuels to Brazil’s economy, as well as food production – the latter an industry that he indicated was vital to feed the world’s growing population, and then finished his address with an invitation to the audience to visit Brazil.

“We shall go on investing in renewable sources for our energy matrix, which is already one of the cleanest in the world, with clear predominance of hydroelectric power and increasing expansion of wind and solar sources.

The Brazilian car fleet, among the ten largest in the world, is properly tailored for the use of biofuels such as ethanol and biodiesel. Brazilian agribusiness is an example to the world. We are productive and competitive while respecting nature and the environment. Our modern low-carbon agriculture can produce enough foodstuff for more than one billion people, resorting to only 8 per cent of our national territory,” he said.