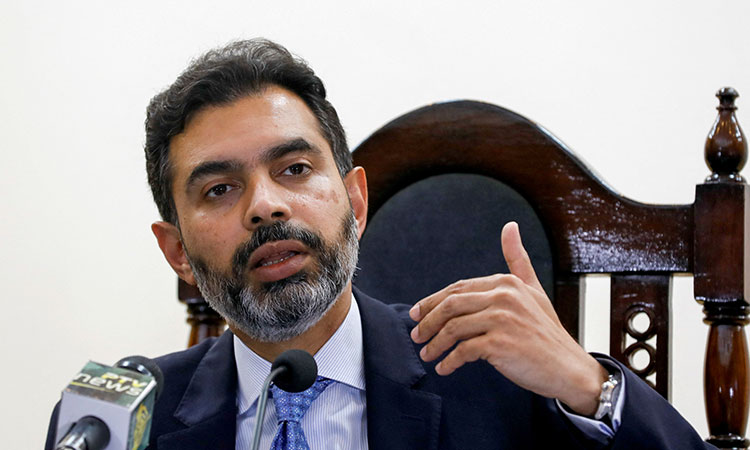 The State Bank of Pakistan (SBP) Governor Dr Reza Baqir receives a monthly salary of Rs2.5 million and worked at the International Monetary Fund (IMF) for 18 years prior to his appointment, according to the finance ministry.

The information was provided in response to questions moved by Pakistan Muslim League-Nawaz (PML-N) Senator Irfan Siddiqui during the question hour in the upper house of parliament.

The finance ministry sent the information directly to Siddiqui as opposed to presenting it in the Senate, a move that was criticised by the senator.

"It is not appropriate to only give the details to me and not the other members of the Senate," Siddiqui said.

Siddiqui had asked about the criteria for appointing the current SBP chief as well as his monthly salary and privileges.

In response, the finance ministry said that Baqir had been appointed under Section 10(3) of the SBP Act, 1956 which stated that the governor will be appointed by the president for a term of three years, and on such salary and terms and conditions of service as the president may determine, except that neither the salary of the governor nor his other terms and conditions of service shall be varied to his disadvantage after his appointment.

It also stated that the governor received a monthly salary of Rs2.5m and attached a list of other perks and perquisites.

The governor receives an annual increment that is 10% of his monthly salary. For accommodation, the state bank governor receives either the "furnished and maintained" SBP House or rent allowance with furnishing and maintenance as approved by the SBP board.

The utility expenses of the SBP governor, including electricity, gas, water and fuel for a standby generator, are provided by the state bank. In addition, 75 percent of the education tuition for the governor's children is also covered. The governor also gets free landlines/mobile phones and internet access.

For domestic help, the governor is entitled to "reimbursement of actual salary paid for up to four servants of Rs18,000/head with periodic reviews of the subsidy by the HR committee as per requirement."

The governor is also entitled to round the clock security "as per requirement," including security guards and a security system, in addition to full medical facilities "as per SBP rules."

Baqir also gets three leaves per month with "leave encashment facility of up to six months on the completion of the tenure" while the gratuity is "one month monetised salary for each completed year of service on last drawn salary".

Under relocation expenses, air tickets for the governor and his family are covered.