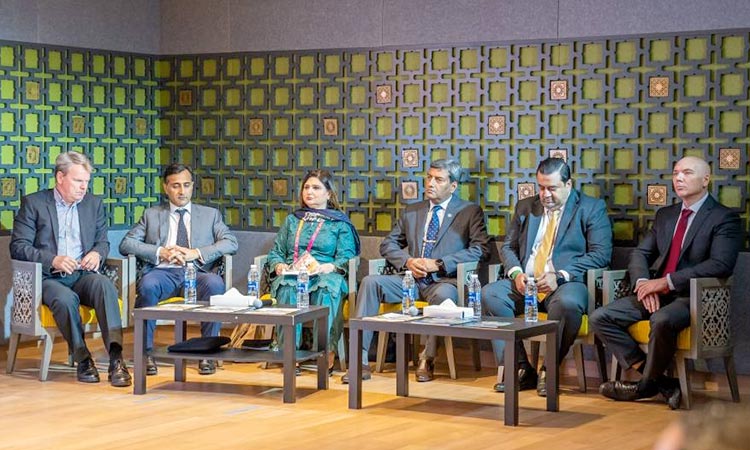 Speakers at the BoI seminar at Pakistan Pavilion.

The seminar’s theme was Investment Opportunities in Education and Innovation in Technologies, and it was held in the Pakistan Pavilion at Expo 2020 Dubai.

Many foreign investors and overseas Pakistanis attended the seminar through physical participation. Due to travel restrictions because of the pandemic, arrangements were also made for the participants to attend the seminar on zoom.

The participants expressed interest in the existing opportunities in Pakistan and the policies by the Government to attract investment in the emerging technologies. Special Technology Zones Authority (STZA), NUST, Evamp and Sanga, UAE, Lenovo, Ecolean, Aviation Complex Kamra also participated in the seminar.

Ms. Fareena Mazhar informed the audience that there are 22 approved Special Economic Zones (SEZs) in Pakistan, and four of them have state-of-the-art facilities and business ecosystems ready for investment as Early Harvest projects.

“Board of Investment, as the premier investment promotion agency of Pakistan, is leading the Pakistan Regulatory Modernization Initiatives (PRMI), which is a key initiative of the Pakistani Government for the modernization and regulation of local business through technological interventions for providing a conducive business environment in the country,” said Ms. Mazhar while informing the audience about BoI.

The Secretary apprised the audience on the Information Technology sector being one of the fastest-growing sectors of Pakistan, contributing around 1% to the GDP of the country at about $3.5 billion. She added that it doubled in the past couple of years, and experts expect it to grow further at 100% in the next two to four years to $7 billion.

“Pakistan’s IT market is full of qualified people who are equipped to cater for the needs of the market at relatively low costs,” said Ms. Mazhar. Further elaborating on freelance development, she shared that the country has been ranked at number four for freelance development globally, and digital growth in Pakistan is going through a rapid evolution.

The Secretary also informed that Pakistan developed its first National Science, Technology, and Innovation Policy in 2012 and innovation, ever since, has been properly documented as being a long-term strategy for driving economic growth by the Government of Pakistan.

Highlighting the digital landscape of Pakistan, Ms. Fareena shared that according to US Technology Giant, Google, Pakistan is becoming a ‘Digital-First Country” and paving new opportunities for businesses to engage with consumers digitally. In terms of incentives, Pakistan offers zero Income Tax on IT & IT-enabled services (ITES) exports till June 2025, 100% foreign ownership of IT & ITES companies, and 100% repatriation of profit to foreign IT & ITES investors, she added.

Ms. Fareena Mazhar presented opportunities and incentives offered by the Government of Pakistan in the priority sectors of Pakistan, including Information Technology, Automotive, Logistics and Food processing etc. The Secretary, BoI, stated that economic uplift of the country is an area of priority by the incumbent Government and Pakistan, under the leadership of Prime Minister Imran Khan, is undergoing bold economic reforms which have increased the confidence of the business community and helped the country improve in all sectors of the economy.

MP presents new opportunities: The Indian State of Madhya Pradesh (MP), on Sunday evening, made a strong pitch to the UAE based investors and industry associations to explore opportunities across priority sectors like food-processing, tourism, apparel & sourcing, mining, IT, infrastructure and healthcare.

Dattigaon along with senior officials discussed about various areas of collaborations between the two countries and ensured comprehensive support from the State Government.

During the meetings, the Minister and Principal Secretary, DIPIP showcased the State’s strengths, policies and business ecosystem for industries. In recent years, Madhya Pradesh has taken significant strides for developing the infrastructure for enhancing the industrial climate of the State. The ideas related to procurement of raw materials, sourcing, retail, trade, and investments were exchanged.

Sanjay Kumar Shukla, IAS, Principal Secretary, Department of Industrial Policy & Investment Promotion, Government of Madhya Pradesh briefed the investors about the business ecosystem of focus sectors of the State. He also emphasised that the Government of Madhya Pradesh is leaving no stone unturned to facilitate investors and is committed to take comprehensive Ease of Doing Business measures in the State.

Rajvardhan Singh Dattigaon said,“ Madhya Pradesh is business hub as it connects various Indian states. The State offers huge investment opportunities to global investors in areas like food processing, IT, tourism and mining.” He added,”Expo 2020 is big opportunity and we are exploring global collaborations to attract investment to the state. We had a very fruitful discussion with DP World and Lulu Group for mutual cooperation.”  He added,” we have improved our infrastructure and launching multiple new projects to facilitate business and strengthen the state economy.To lure global investment the state is also introducing new incentives and subsidies for investors.”

He concluded,”at Expo 2020 we would like to display our strengths. Madhya Pradesh is not only blessed with abundant natural resources but also has one of the finest technically trained manpower in our state. The state has been ranked fourth in terms of ease of doing business and our sectors like logistics, tourism, automobile, renewable energy, and textile offer a huge scope of investments.”

In the evening, Government of Madhya Pradesh delegation hosted a networking dinner for Industry houses and invited Dr Aman Puri, Consul General of India in Dubai and Deputy Commissioner-General for India at Expo 2020 Dubai, as the Guest of Honour.

Earlier, The Madhya Pradesh delegation interacted with the representatives of the Annual Investment Meet (AIM), Government of UAE, which is the world’s leading platform for foreign direct investment (FDI). During the discussion, Hon’ble Minister highlighted the prospects of partnerships with the help of AIM platform.

In his word to the attendees Zhao Hui, Project Director of Shanghai Electric said, “Shanghai Electric is proud to take part in this phase four of the Mohammed Bin Rashid Al Maktoum Solar Park. This project represents the values, vision and message of UAE in gathering the world for a better future. And we assure to provide clients with the best energy solutions for a greener planet.”

With only 62 meters shorter than Paris’s famous Eifel tower, The CSP constructed tower in Mohammed Bin Rashid Al Maktoum Solar Park project is considered to be the tallest in CSP with 262 meters high. And the total area of phase four is equal to 6,162 football fields is being implemented by Noor Energy 1 PSC. After the project is into operation, it will reduce 1.6 million tons of carbon emissions every year.

The Construction of the phase four project began in 2018, making it the largest phase built in the Mohammed Bin Rashid Al Maktoum Solar Park, the largest single-site solar park in the world based on the Independent Power Producer (IPP) model. The park has a planned production capacity of 5,000 MW by 2030, with investments totaling Dhs50 billion. When completed, it will save over 6.5 million tons of carbon emissions annually. 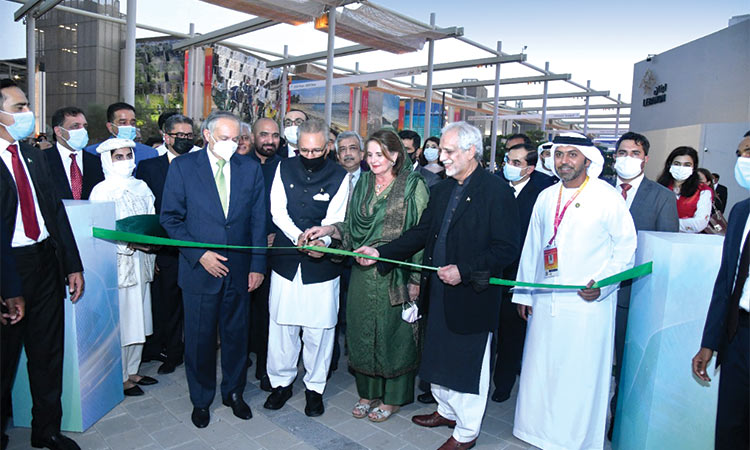 President Dr Arif Alvi along with Begum Samina Alvi inaugurated the Pakistan Pavilion, themed as "Hidden Treasure." Alvi appreciated the creative display of the pavilion showcasing the unexplored riches of the country.