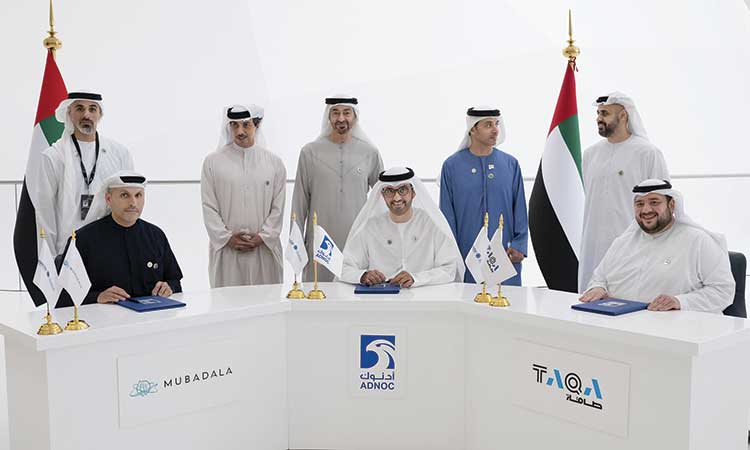 Sheikh Mohamed Bin Zayed during the meeting at the Expo 2020 Dubai.

His Highness Sheikh Mohamed Bin Zayed Al Nahyan, Crown Prince of Abu Dhabi, Deputy Supreme Commander of the UAE Armed Forces and Chairman of the Board of Directors of the Abu Dhabi National Oil Company (Adnoc), on Wednesday presided over the annual meeting of the Adnoc Board of Directors.

During the meeting, which was held in the UAE Pavilion at Expo 2020 Dubai, Sheikh Mohamed Bin Zayed conveyed the support and encouragement of President His Highness Sheikh Khalifa Bin Zayed Al Nahyan for Adnoc and commended the company’s proactive steps to embrace the energy transition, noting its clean energy partnership with Emirates Water and Electricity Company (EWEC).

Sheikh Mohamed lauded Adnoc’s strong performance and its landmark achievements in 2021 that have maximised value and growth opportunities for the UAE.

During the meeting, Sheikh Mohamed Bin Zayed underlined Adnoc’s important role as a catalyst for the UAE’s growth and diversification and expressed confidence that the company is well placed to continue to empower the nation’s socioeconomic ambitions as it looks ahead to the next 50 years.

Adnoc is building on this success and today announced a significant increase in national reserves of 4 billion stock tank barrels (STB) of oil and 16 trillion standard cubic feet (TSCF) of natural gas. These additional reserves increase the UAE’s hydrocarbon reserves base to 111 billion STB of oil and 289 TSCF of natural gas, reinforcing the country’s position in global rankings as the holder of the sixth-largest oil reserves and the seventh-largest gas reserves.

Commenting on the achievements, Sheikh Mohamed Bin Zayed congratulated Adnoc and said the UAE will continue to responsibly unlock its hydrocarbon resources to drive progress and contribute to global energy security.

As Adnoc unlocks the UAE’s lower carbon oil and gas resources, it is ensuring greater economic value is retained in the local economy through its successful In-Country Value (ICV) programme which is nurturing new business opportunities for the private sector and creating jobs opportunities for UAE Nationals.

Sheikh Mohamed and the board reviewed the ongoing achievements of Adnoc’s ICV programme. Since Adnoc launched the programme in January 2018, it has driven Dhs105 billion ($28.6 billion) back into the UAE economy and created over 3,000 jobs for UAE Nationals in the private sector, including over 1,000 jobs this year.

$127 billion investment plan: The Board of Directors approved Adnoc’s five year business plan and capital expenditure (CAPEX) of Dhs466 billion ($127 billion) for 2022-2026 to enable its plans to expand its upstream production capacity and downstream portfolio as well as its low carbon fuels business and clean energy ambitions. As part of this plan, Adnoc aims to drive over Dhs160 billion ($43.6 billion) back into the UAE economy across 2022-2026 through its ICV programme. This will further stimulate growth and diversification and support the objectives of the UAE Principles of the 50 outlined by the wise leadership to usher a new era of economic and social growth over the next 50 years.

The board also approved Adnoc’s New Energies Strategy aimed at further reducing its carbon footprint and enabling it to capitalise on opportunities in renewable energy, hydrogen and other lower carbon fuels. The board noted that Adnoc’s clean energy partnership with EWEC will see up to 100 per cent of Adnoc’s grid power supplied by EWEC’s nuclear and solar clean energy sources, and concluded it is an important milestone in Adnoc’s journey to a lower-carbon future.

In Downstream and Industry, the board endorsed Adnoc’s plans to evaluate doubling its liquefied natural gas (LNG) production capacity from 6 to 12 million tonnes per annum (MMTPA). The potential expansion of Adnoc’s LNG production capacity is underpinned by the growth in its natural gas position, with new developments planned to add 3 billion standard cubic feet per day (scfd) and more to come from associated gas as it expands its crude oil production capacity.

The board highlighted the progress of the TA’ZIZ Industrial ecosystem in Ruwais and the strong local and international investor interest received, particularly in the TA’ZIZ Industrial Chemicals Zone. The Chemicals Zone, Adnoc’s joint venture with Abu Dhabi Developmental Holding Company (ADQ), is a key pillar of Adnoc’s downstream and industrial expansion strategy and is helping to accelerate the development of Abu Dhabi’s petrochemicals and manufacturing industry. Anchor projects for the world-class chemicals zone are already in the design phase and international partners such as Reliance Industries, Fertiglobe, GS Energy and Mitsui have announced they will partner with TA’ZIZ.

Within the TA’ZIZ Industrial Chemicals Zone, Adnoc is advancing a world-scale low carbon ammonia facility as part of its ongoing efforts to reinforce Abu Dhabi’s leadership in the clean hydrogen economy and capitalise on growing global demand for low-carbon ammonia. The board noted the progress on this front, including Adnoc’s recent sales of low carbon ammonia demonstration cargos produced by Fertiglobe at its Fertil plant in Ruwais to customers in Asia.

The board discussed recent developments in oil and gas markets and noted that Adnoc continues to remain agile, resilient and able to quickly adapt to market conditions.

The success of the Murban Futures Contract on ICE Futures Abu Dhabi (IFAD) was also highlighted with the new Murban Futures Contract recently trading over one billion barrels of Abu Dhabi’s flagship low-carbon Murban crude. The board noted that Murban was now more widely available to a broader set of market participants around the globe and is well positioned to act as an important price marker for crude oil.

On this occasion, Dr Al Jaber said, “Adnoc is very grateful for the support of His Highness Sheikh Mohamed Bin Zayed, the Supreme Council for Economic and Financial Affairs and the Adnoc Board of Directors, as their guidance has been instrumental in enabling our robust operational and financial performance and landmark achievements this year. Our progress is as a result of the wise directives of the UAE’s leadership and the hardwork and dedication of all my colleagues at Adnoc.

“We have laid a solid foundation to ensure Adnoc continues to drive greater and more sustainable value for the UAE during the energy transition. As we build on this foundation, we are capitalising on the many commercial opportunities in this era while strengthening our position as one of the lowest cost and lowest carbon oil and gas producers in the world.

“The Board of Directors’ approval of Adnoc’s Business Plan and New Energies Strategy marks an important phase in our ongoing journey to future-proof our business model. We are confidently moving forward to deliver upstream growth, accelerate the UAE’s industrial development through our downstream expansion, build our trading capabilities and advance our position in hydrogen and clean energy. At the same time, we are creating opportunities for the UAE’s private sector to benefit from Adnoc’s growth and enabling more skilled job opportunities for UAE National talent, in line with the Leadership’s wise directives.” The increase in oil and gas national reserves was driven by Adnoc’s continuous appraisal activities and enabled by best reservoir management practices across its onshore and offshore portfolio as well as leveraging advanced tailored technologies. In addition, maturing development plans towards achieving Adnoc’s 5 million barrels per day (mmbpd) production capacity target by 2030 contributed to the substantial reserves increase.

Around half of the newly added 4 billion STB oil national reserves are Murban-grade crude, Abu Dhabi’s highly sought-after lower-carbon crude grade which has been successfully trading on the ICE Futures Abu Dhabi (IFAD) commodities exchange since March 2021. The new Murban reserves offer the potential to reinforce the long-term liquidity of the Murban Futures Contract. Furthermore, the increase in oil and gas reserves underpins Adnoc’s objectives of boosting its crude oil production capacity and driving gas self-sufficiency for the UAE. These objectives will be enabled by the growth of Adnoc’s drilling activities, through Adnoc Drilling, as they will require thousands of new wells by 2030.

This year Adnoc has delivered several other landmark achievements. These include the largest initial public offering (IPO) in the history of Abu Dhabi’s stock exchange, Adnoc Drilling, which was more than thirty times oversubscribed; the IPO of the world’s biggest shareholder-owned exporter of fertiliser, Fertiglobe, which was more than twenty times over-subscribed; raising $1.64 billion (Dhs6 billion) through the combined offering of Adnoc Distribution shares and issuance of exchangeable bonds; the successful conclusion of Abu Dhabi’s second exploration block bid round and the signing of a $6.2 billion (Dhs22 billion) strategic partnership with Borealis to build Borouge 4 in Ruwais. 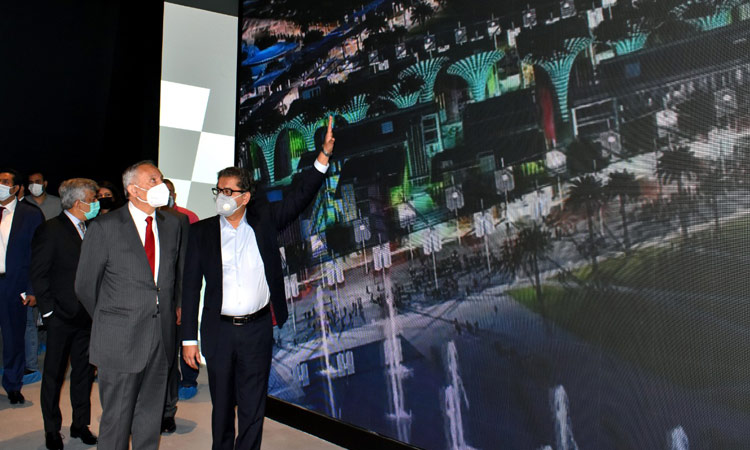