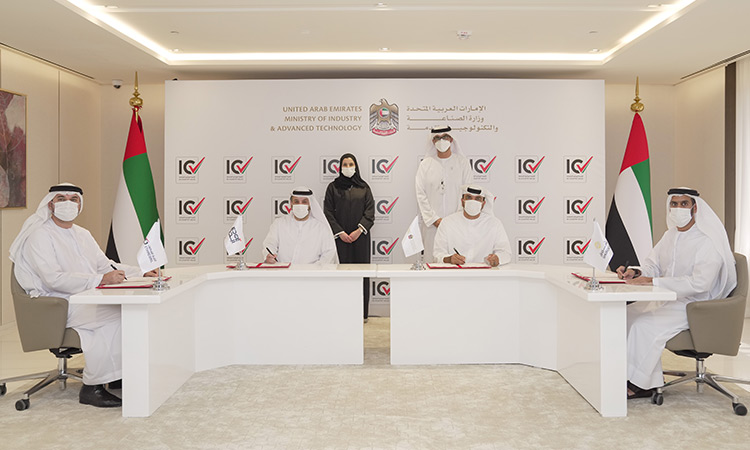 As part of the country’s efforts to extend the National In-Country Value (ICV) Programme at the federal level, the Ministry of Industry and Advanced Technology (MOIAT) has signed memoranda of understanding with Etihad Rail, EDGE Group and Sharjah Investment and Development Authority (Shurooq), which become the second set of companies to commit to the programme launched in support of the UAE’s industrial sector.

The MoUs are designed to enhance cooperation between the Ministry of Industry and Advanced Technology, federal and local agencies and major national companies in order to achieve the goals of the National In-Country Value programme. The programme seeks to redirect public- and private-sector procurement to the local economy and enhance the role and development of the national industrial sector. The National In-Country Value programme is in line with “Operation 300Bn”, the national strategy for industry and advanced technology that aims to boost the UAE industrial sector’s contribution to GDP.

The memoranda with Etihad Rail, EDGE Group and Shurooq follow those signed in September with Etisalat, Emirates Steel and TAQA.

Undersecretary of the Ministry of Industry and Advanced Technology, HE Omar Suwaina Al Suwaidi, emphasized that “the signing of the memoranda of understanding represents a big boost to the programme following the first set signed last September. It is a further testament to the opportunities the programme offers partners and suppliers alike, which are supported by the Abu Dhabi Department of Economic Development, Abu Dhabi National Oil Company (ADNOC) and Aldar, among others.”

The MOIAT Undersecretary added: “The second set of entities participating in the programme has diverse activities and capabilities, from Etihad Rail’s infrastructure to Shurooq Authority’s specialty in developing projects as well as enabling and encouraging investment, to EDGE Group, which owns and manages multiple activities in advanced defense industries, technological transformation and innovation – all of which are priority sectors in the strategy of the Ministry of Industry and Advanced Technology.”

His Excellency Omar Al Suwaidi noted that the National In-Country Value programme is a key initiative that complements other programs and initiatives related to the development of the industrial sector, notably UAE Industry 4.0, which aims to accelerate the adoption of the applications of the Fourth Industrial Revolution, and the financing solutions offered by the Emirates Development Bank and Etihad Credit Insurance. It will also help achieve the goals of “Operation 300bn” and raise the industrial sector’s contribution to the country’s GDP to AED300bn.

For his part, Faisal Al Bannai said: “EDGE is proud to continue its strong relationship with the Ministry of Industry and Advanced Technology, and now as part of the National In-Country Value Programme.

“As a major pillar in the nation’s drive towards the greater use of advanced technology across all sectors, the programme will allow EDGE, as a leader in this field, to generate in-country value by further cultivating, nurturing, and diversifying our sovereign capabilities, and our home-grown talent, so we can maintain a significant competitive edge and contribute significantly to the GDP of the UAE.

“We are supporting in multiple domains around industry 4.0 and play a key role in the development of local manufacturing by investing significant resources to ensure we create an environment for sustainable economic growth, establishing the UAE as a world-leading centre for future industries, and promoting superior ‘Made in UAE’ products in global markets.”

For his part, Marwan Bin Jassim Al Serkal said: “Shurooq’s partnership and involvement in UAE’s National In-Country Value programme, which was launched as part of the ’Projects of the 50’ initiative by the UAE government, reflects on our commitment to further support and strengthen our national industrial sector – a responsibility shared by all national entities involved, which, in turn, strengthens the UAE’s global competitiveness and its economic diversification strategy.”