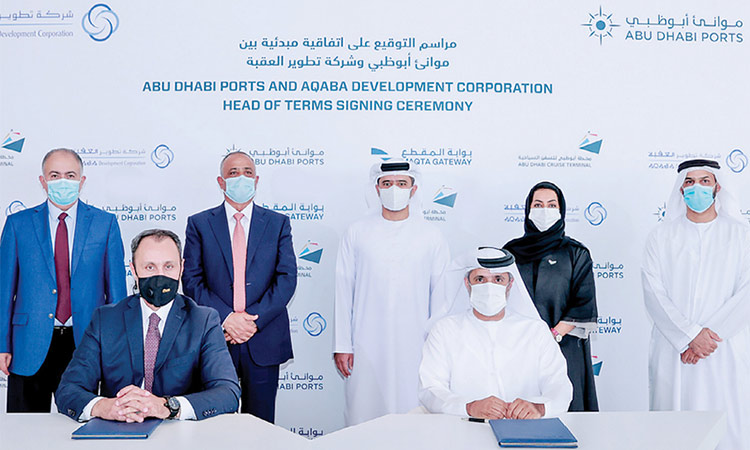 Top officials during the signing ceremony on Sunday.

AD Ports Group, a leading facilitator of trade and logistics, has signed a Heads of Terms agreement with the Aqaba Development Corporation that will see AD Ports Group take on the establishment of a state-of-the-art cruise terminal at Marsa Zayed in Aqaba, Jordan.

It will be the first facility to be developed by AD Ports Group in the Hashemite Kingdom of Jordan and its first cruise facility outside of the United Arab Emirates.

The new terminal will serve as a gateway in the Port of Aqaba that will receive cruise ships passengers visiting the Red Sea, in addition to serving as a major attraction for the residents of Aqaba with a wide range of tourism, commercial, and entertainment services.

Leveraging its long-standing and extensive expertise as a global facilitator of trade and logistics, AD Ports Group will work closely with the Aqaba Development Corporation to deploy the digital system to expand the technical capacity and capabilities of Aqaba ports.

The agreement was signed during a visit by a senior delegation from the Hashemite Kingdom of Jordan headed by Eng. Nayef Ahmad Bakheet Altheeb, Chief Commissioner, Aqaba Special Economic Zone Authority to Abu Dhabi and is the first of a series of strategic partnerships with AD Ports Group.

Captain Mohamed Juma Al Shamisi, Group CEO, AD Ports Group, said: “We are pleased and proud to sign this strategic agreement with the Aqaba Development Corporation. The creation and operation of a new cruise terminal at Marsa Zayed will be a milestone for Jordan’s fast-growing cruise and tourism sector and is the first of many enhancement projects that we have planned.

“In addition, as part of our continued commitment to support the growth of Jordan’s maritime industry, AD Ports Group, through its digital arm, Maqta Gateway, is leveraging its digital expertise to implement a robust Port Community System at the Aqaba ports ecosystem that will accelerate the exchange of goods and elevate commerce to new heights.”

Hussein Alsafadi, CEO, Aqaba Development Corporation said: “We are pleased to be joining forces with AD Ports Group with this agreement which falls in-line with the wider cooperation between the Hashemite Kingdom of Jordan and the United Arab Emirates. Through their ambitious development of ports in Abu Dhabi and around the world, they have demonstrated their ambition and ability to evolve and drive growth in the maritime sector.

“Developing the cruise terminal in Aqaba will significantly support the growth of the tourism sector in the Kingdom, which will expand of the scope of onsite facilities and services.

“It will also facilitate the movement of cruise ship passengers arriving from countries across the Mediterranean Sea and Europe, who typically visit the Golden Triangle of Jordan. Stretching from the desert landscape of Wadi Rum to the sandy beaches of Aqaba and the ancient city of Petra, the Golden Triangle is considered by many to be among the top tourism destinations within Jordan. This cooperation will also promote our tourism offerings, create new jobs, and strengthen Aqaba’s status as a major regional hub.

“We are confident that through our cooperation with AD Ports Group and Maqta Gateway, we will be able to keep pace with the rapid developments of digitisation in the transport and logistics sectors, as well as enhance our digital systems with the aim to provide world class services for port users in Aqaba”.

AD Ports Group today serves as the region’s premier facilitator of logistics, industry, and trade, as well as a bridge linking Abu Dhabi to the world. Part of ADQ, one of the region’s largest holding companies with a broad portfolio of major enterprises spanning key sectors of Abu Dhabi’s diversified economy, AD Ports Group’ vertically integrated business approach has proven instrumental in driving the emirate’s economic development over the past decade. 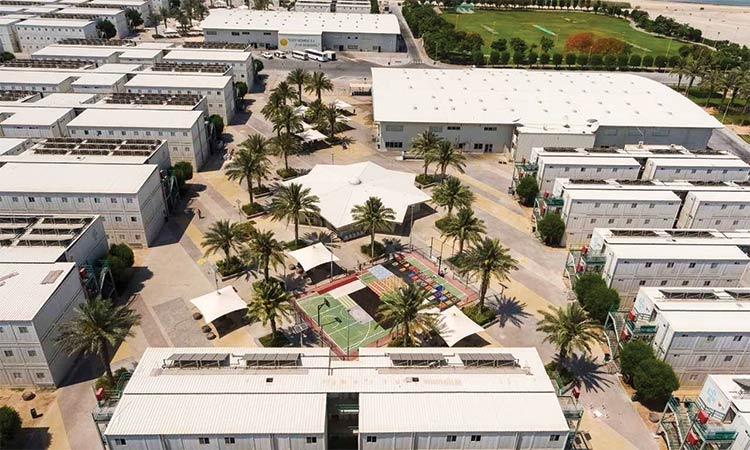 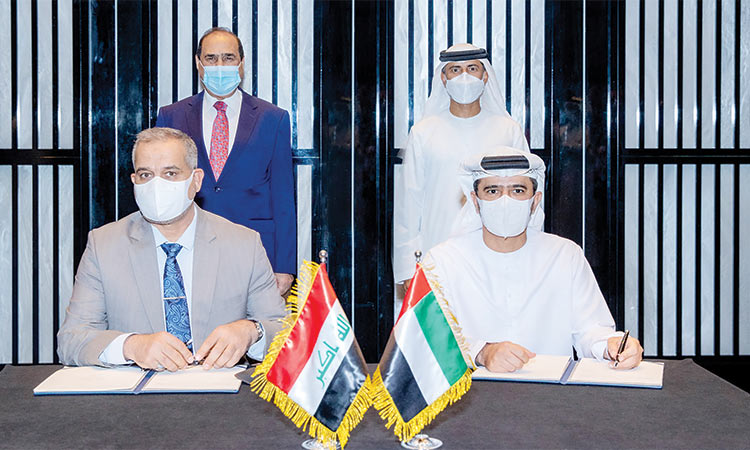 AD Ports Group, the leading global driver of trade and logistics, signed a Memorandum of Understanding (MoU) with the General Company for Ports of Iraq (GCPI)