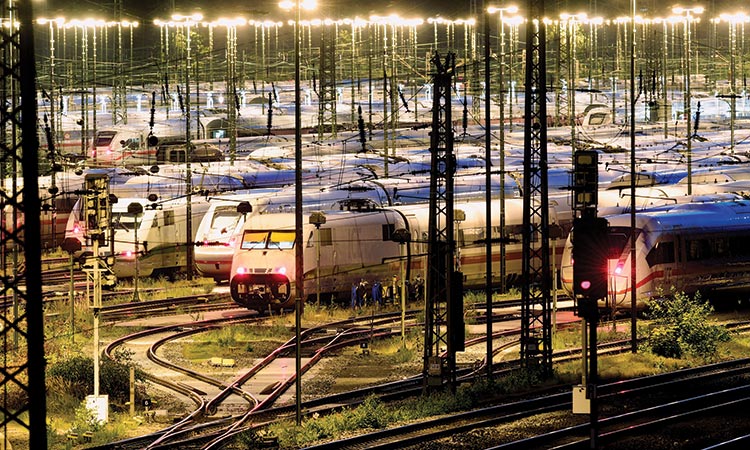 Locomotives of ICE high-speed trains stand on the tracks in Hamburg, Germany, on Wednesday.

German business morale fell for the second month running in August, as supply bottlenecks and rising COVID-19 cases drove companies to take a dimmer view of the coming months in Europe’s largest economy, a survey showed on Wednesday.

The Ifo institute said its business climate index came in at 99.4, missing an analyst consensus of 100.4 in a Reuters poll and down from a downwardly revised reading of 100.7 in July.

“The mood in the German economy has clouded over again,” Ifo President Clemens Fuest said in a statement. “Supply bottlenecks for intermediate products in manufacturing and worries about rising infection numbers are putting a strain on the economy.”

Concerns were growing in the hospitality and tourism sectors in particular, he added.

Data on Tuesday showed the economy grew more than expected in the second quarter as the easing of COVID-19 curbs spurred consumers to dip into record savings piled up during the winter lockdown, and the state pressed on with a huge debt-financed stimulus push.

But with government officials warning of a fourth COVID-19 wave during the autumn, the months ahead look more problematic.

Ifo economist Klaus Wohlrabe told Reuters the outlook for that period gave cause for concern as 70 per cent of industrial businesses surveyed complained about supply chain bottlenecks.

Earlier, the Statistics Office said German exports to China declined for the first time in nearly a year in July, easing by 3.9 per cent year-on-year to 8.4 billion euros ($9.9 billion).

“The decline in German companies’ exports to China in July is a sobering sign,” said Volker Treier, head of foreign trade at the DIHK Chambers of Industry and Commerce, adding that shipping problems were disrupting international supply chains.

Earlier this month, BMW raised its 2021 profit forecast after strong quarterly results, but said the global semiconductor chip shortage and rising raw materials prices would hurt its performance in the second half of the year.

Siegfried Russwurm, president of the BDI industry group, said the COVID-19 pandemic continued to cause problems, such as with closed ports in China. “The situation remains fragile,” Russwurm added, referring to the pandemic.

ING economist Carsten Brzeski said the Ifo reading pointed to a loss of economic momentum in the second half of the year.

“A levelling-off of GDP growth rates (then) would imply that the German economy will not return to pre-crisis levels this year but only in early 2022,” he said.

Activity in Germany’s industrial sector remains at a high level but manufacturers are worried about disruption caused by shortages of semi-conductors, plastics and metals, Klaus Wohlrabe of the Ifo economic institute said on Wednesday.

“70 per cent of manufacturers complain about bottlenecks, up from 64 per cent in July,” he said. “Export expectations have fallen but remain at a good level.”

He said half of companies in both manufacturing and retail wanted to increase prices to make up for higher costs and that rising coronavirus infections have resulted in a sharp fall in expectations in hospitality and tourism.

German exports to China declined for the first time in nearly a year in July, easing by 3.9 per cent year-on-year to 8.4 billion euros ($9.9 billion), the statistics office said on Wednesday.

That was the first decline in exports to China, Germany’s second biggest sales market outside the European Union, since August 2020, and it was the biggest slump since May 2020, when the world was gripped in the first wave of the coronavirus pandemic.

Exports to the United States grew by 15.3 per cent to 10.8 billion euros, the statistics office said.

European stocks edged higher on Wednesday, with travel stocks rising for a fourth day, while markets globally were range-bound ahead of a policy update from the US Federal Reserve later this week. The pan-European STOXX 600 index rose 0.1 per cent at 0717 GMT after a record close on Wall Street.

The European benchmark itself was just less than a per cent away from its peak.

Travel and leisure stocks gained 0.7 per cent to hit their highest level in over a week.

Among stocks, Swedish radiation therapy equipment maker Elekta slid 6.4 per cent after saying it was preparing for higher supply chain and related costs after profits tumbled in the three months to July.

UK food delivery firm Deliveroo slipped 1.8 per cent, while British supermarket Morrisons edged up after news it was set to enter the UK’s blue-chip FTSE 100 index.