US job growth picks up in May; unemployment rate falls to 5.8 per cent - GulfToday 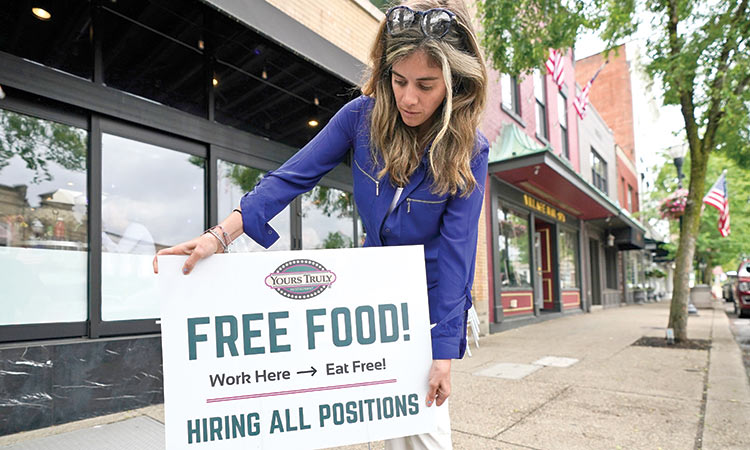 Coleen Piteo, Director of marketing at Yours Truly restaurant, puts out a sign for hiring on Thursday in Chagrin Falls, Ohio. Associated Press

Nonfarm payrolls increased by 559,000 jobs last month, the labour Department said in its closely watched employment report on Friday. Data for April was revised slightly higher to show payrolls rising by 278,000 jobs instead of 266,000 as previously reported.

Economists polled by Reuters had forecast 650,000 jobs created in May. The unemployment rate fell to 5.8% from 6.1% in April. The jobless rate has been understated by people misclassifying themselves as being “employed but absent from work.”

April’s initial employment count, which delivered roughly a quarter of the new jobs economists had forecast, led to handwringing among some economists and investors that growth was stagnating at a time when inflation was rising.

The improving public health situation and massive fiscal stimulus are supporting the economy. At least half of the American population has been fully vaccinated against COVID-19, according to data from the US Centers for Disease Control and Prevention.

That has allowed authorities across the country to lift virus-related restrictions on businesses, which nearly paralyzed the economy early in the pandemic.

But the reopening of the economy is straining the supply chain.

Millions of workers, mostly women, remain at home as most school districts have not moved to full-time in-person learning.

Despite vaccines being widely accessible, some segments of the population are reluctant to get inoculated, which labour market experts say is discouraging some people from returning to work.

Government-funded benefits, including a $300 weekly unemployment subsidy, are also constraining hiring. Republican governors in 25 states are terminating this benefit and other unemployment programs funded by the federal government for residents starting next Saturday.

These states account for more than 40% of the workforce. The expanded benefits will end in early September across the country. That, together with more people vaccinated and schools fully reopening in the fall, is expected to ease the worker scarcity by September.

Becky Frankiewicz, president of the temporary staffing firm Manpower Group’s North American division, said many of the firm’s clients are raising pay and benefits to try to attract more applicants. Some of these companies, particularly in manufacturing and warehousing, are also trying other tactics, like paying their workers weekly or even daily, rather than every two weeks. Manpower is also encouraging its clients to make job offers the same day as an interview rather than waiting.

About 60% of Manpower’s temporary placements are leaving their jobs before a temporary assignment ends, Frankiewicz said, mostly because they are receiving better offers.

“People have options,” she said. “Companies have to offer speed in cash, speed to hire and a lot of flexibility in how they work.”

For now, though, there are signs that many of the unemployed remain cautious about seeking jobs.

On Thursday, Tony Sarsam, CEO of SpartanNash, a grocery distributor and retailer, said on a conference call with investors that the company took part last month in a job fair with 60 companies that had 500 jobs to fill.

US stocks rose on Friday, with technology shares leading the way, as weaker-than-expected jobs growth eased concerns about the economy running too hot and causing an early tightening of monetary policy.

Factory orders fall: New orders for US-made goods fell more than expected in April as a global semiconductor shortage weighed on the production of motor vehicles and electrical equipment, appliances and components.

The Commerce Department said on Friday that factory orders dropped 0.6% in April after increasing 1.4% in March. Economists polled by Reuters had forecast factory orders slipping 0.2%. Orders surged 14.2% on a year-on-year basis.

Manufacturing, which accounts for 11.9% of the US economy, is being supported by a shift in demand towards goods from services during the pandemic. But the strong demand is straining supply chains.