India’s merchandise exports rise to over $30 billion in April 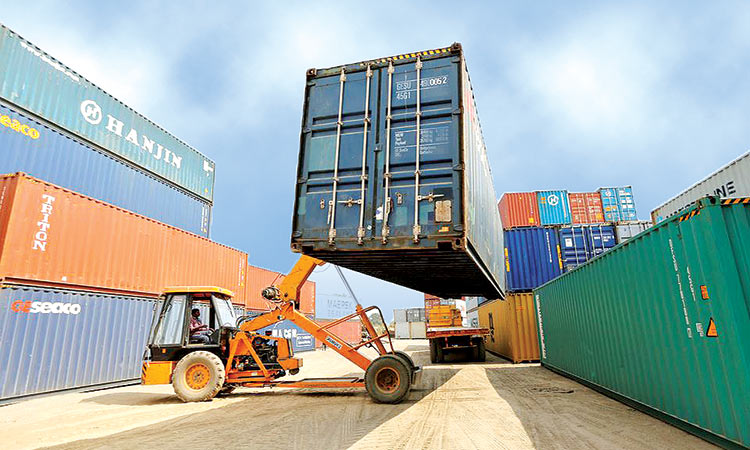 A mobile crane carries a container at Thar Dry Port in Sanand in Gujarat. Reuters

“As compared to April 2019, exports in April 2021 exhibited a positive growth of 17.62 per cent in dollar terms and 26.17 per cent in rupee terms,” an official statement on foreign trade said.

The CFPI readings measure the changes in retail prices of food products. Prithviraj Srinivas, Chief Economist at AXIS CAPITAL, Mumbai said, “April CPI fell as expected, largely on weaker food and non-food prices, except for fuel, housing and health. We had projected a sharper decline to 4%.” “This dip is due to base effects and will prove short-lived, with subsequent CPI readings coasting near 5% in coming months. The biggest risk to CPI staying within RBI’s comfort band comes from COVID-19 infections in the hinterland impacting market supply. We remain watchful.”

GOAIR PLANS IPO: Indian budget carrier Go Airlines Ltd has filed for an initial public offering aiming to raise 36 billion rupees ($491 million), a move that comes as airlines try to bolster finances to cope with the latest disruptions caused by the pandemic.

A second wave of COVID-19 infections in India is taking a heavy toll on domestic airlines, which were taking initial steps back towards normality after a nationwide lockdown hampered their operations for months in 2020.

The company, which is in the process of rebranding itself as “Go First”, plans to use the money raised from the IPO to repay loans, which total more than 20 billion rupees, and clear other dues, it said in a filing.

The airline has a current fleet of 55 Airbus narrow body planes and is due to take delivery of 98 more starting this year.

The company’s share offering may also include an additional share issue worth up to 15 billion rupees, the filing said.

India’s airlines are under renewed pressure to raise cash or take steps to downsize or consolidate. They are expected to report total losses of $4 to $4.5 billion in the fiscal year ended March 31 and may lose a similar amount this year, aviation consultancy CAPA India said.