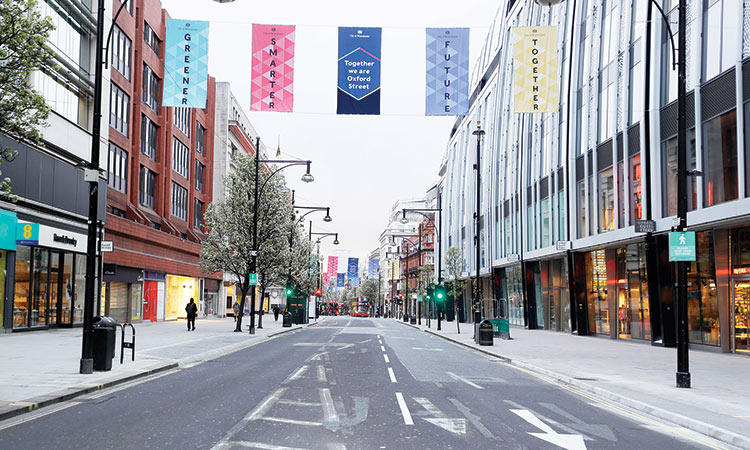 A view of an empty Oxford Street in London on Wednesday. The British economy shrank by 1.5% in the first quarter of 2021. Associated Press

Oil prices rose on Wednesday after a drop in US crude inventories reinforced Opec’s robust demand outlook, while the market awaited fresh updates on the Colonial Pipeline outage.

“The Colonial pipeline cyberattack saga is dragging on and is now causing material shortages in the Eastern United States.”

Gasoline stations from Florida to Virginia began running out of fuel on Tuesday as drivers rushed to top up their tanks and pump prices rocketed.

US unleaded gasoline prices hit an average $2.99 a gallon, the highest since November 2014, the American Automobile Association said.

“While a prolonged outage would be supportive for refined product prices, it could start to weigh on crude oil prices, if refiners on the U.S. Gulf Coast are forced to reduce run rates due to a build-up of refined product inventories in PADD3,” ING analysts wrote in a Wednesday note.

Colonial Pipeline has said it hopes to restart a large portion of the network by the end of the week.

Meanwhile, oil prices were supported by the latest outlook from the Organization of the Petroleum Exporting Countries (Opec), which stuck to a forecast for a strong recovery in world oil demand in 2021 with growth in China and the United States outweighing the impact of the coronavirus crisis in India.

Opec said it expects demand to rise by 5.95 million bpd this year, unchanged from its forecast last month. However, it cut its demand outlook for the second quarter by 300,000 bpd due to soaring COVID-19 infections in India.

Data from the American Petroleum Institute industry group showed U.S. crude oil stocks fell by 2.5 million barrels in the week to May 7, according to two market sources, slightly less than expected.

The drawdown came before the Colonial Pipeline was hit by a cyberattack last Friday which forced the pipeline, which transports more than 2.5 million barrels a day of fuel, to shut down. Meanwhile, a sell-off in global shares extended to its longest losing streak in two months on Wednesday as surging commodity prices and growing inflationary pressure in the United States prompted bets on earlier interest rate hikes and higher bond yields.

Sentiment was aided by comments from the European Commission that the euro zone will rebound from its COVID-19 slump more than expected and data showing Britain’s pandemic-battered economy grew more strongly than anticipated in March.

MSCI’s broadest index of Asia-Pacific shares outside Japan slumped 0.8%, having earlier touched its lowest since March 26.

After hitting fresh record highs earlier in the week, MSCI’s gauge of stocks across the globe was 0.2% down, its third consecutive day of losses, the longest-running streak since March 4.

Investor focus was locked on the U.S. consumer price index report to be released by the US Labour Department at 1230 GMT, with analysts expecting a 3.6% lift in year-on-year prices, boosted by last April’s low base.

US Treasury yields remained stuck in a tight range. The yield on benchmark 10-year Treasuries drifted lower to 1.6183%, below the recent peaks of late March and far from the 1.9% level at the start of 2020 before the coronavirus pandemic.

Euro zone bond yields held below recent highs touched on Tuesday. Germany’s 10-year yield was down 1 basis point to -0.17%, after rising to the highest since March 2020 at -0.152% on Tuesday.

Analysts said a combination of inflation fears and some investors cutting their exposure to overstretched stocks or sectors was behind the recent downturn.

“It’s a battle of two narratives: one of reflation and roaring 20s, with fiscal stimulus creating higher levels of growth; and the other is the lower-for-longer idea where ultimately inflation proves hard to generate and interest rates stay at low levels,” Kiran Ganesh, head of multi asset at UBS Global Wealth Management in London.

“These two narratives are conflicting and are in investors’ minds at the same time.”

Japan’s Nikkei reversed early gains to shed 1.9%, while Taiwan’s benchmark index fell as much as 6% from all-time highs to levels seen in February on fears it may raise its COVID-19 alert level in coming days, which would lead to closure of shops dealing in non-essential items as infections rise.

Analysts, however, doubted the broader equities sell-off would extend much further in a world of easy accommodative policy and fiscal largesse.