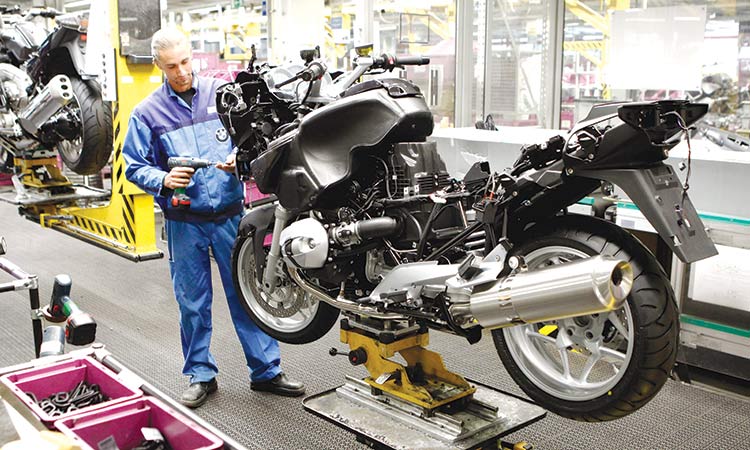 A BMW employee assembles a motorcycle at the company’s factory in Berlin. Reuters

Eurozone factory activity growth surged to a record high in April, boosted by burgeoning demand and driving a rise in hiring, although supply constraints led to an unprecedented rise in unfulfilled orders, a survey showed.

While a third wave of coronavirus infections in Europe has forced some governments to shutter much of their dominant service industries, factories have largely remained open.

IHS Markit’s final Manufacturing Purchasing Managers’ Index (PMI) rose to 62.9 in April from March’s 62.5, albeit below the initial 63.3 “flash” estimate but the highest reading since the survey began in June 1997.

An index measuring output, which feeds into a composite PMI due on Wednesday and that is seen as a good guide to economic health, edged down from March’s record high of 63.3 to 63.2. Anything above 50 indicates growth.

“The eurozone was late out of the gates in terms of its economic rebound but it does seem to be starting. Looking at where we are now the numbers are encouraging,” said Bert Colijn at ING.

“It is a foregone conclusion that Q2 will be much stronger than Q1 was.” The backlogs of work index soared to 61.5 from 60.4, a survey high.

French manufacturing growth eased off a little from March’s peak as bottlenecks weighed on the recovery but Italian factory activity grew at its fastest rate on record, sister surveys showed.

German factories have been humming along during the pandemic, almost undisturbed by the related lockdowns, and activity accelerated in Europe’s biggest economy early this year on strong demand from the United States and China.

Its latest PMI was only just below March’s high at 66.4.

China’s factory activity growth slowed and missed forecasts as supply bottlenecks and rising costs weighed on production, a survey showed on Friday, while figures due later on Monday are expected to show an acceleration in US factory growth.

With the cost of raw materials rising at a near record pace, factories were forced to raise their own prices at the sharpest pace since IHS Markit began collecting the data.

“There has been an increase in cost pressures, mainly for manufacturers. Inputs ranging from energy prices to commodity prices are rising and shortages in all sorts of parts of the economy are starting to have an impact on prices,” Colijn said.

“It does look like that will start to have an impact on goods inflation over the course of this year.”

Inflationary pressures might be welcomed by policymakers at the European Central Bank who have not managed to get inflation anywhere near their goal despite ultra-loose monetary policy.

German bonds underperformed US Treasuries and yields, which move inversely with prices, rose in April.

The sell-off intensified last Thursday when German inflation advanced further above the European Central Bank’s target, and the US data showed economic growth speed up in the first quarter.

Expectations of higher growth and a reignition of inflation, first triggered by vast fiscal stimulus in the United States, have pushed government borrowing costs on both sides of the Atlantic higher this year.

Investors are on the lookout for signs hinting that central banks may start scaling back extraordinary monetary stimulus, which still holds down bond yields.

After calming on Friday, when month-end buying supported bond prices, Germany’s 10-year Bund yield, the benchmark for the region, rose over 3 basis points to a new high since March 2020 at -0.162 per cent on Monday.

Arne Petimezas, analyst at AFS Group in Amsterdam, said that while he did not see a specific driver behind Monday’s move, it is in line with expectations. “Recovery is picking up, vaccinations are accelerating, reopening is nearing,” he said.

Some investors ended April expecting a further rise in euro area government bond yields as vaccinations speed up and UniCredit analysts earlier said Bunds would be monitored “particularly closely” for any indication as to whether last week’s sell-off may be the beginning of a new trend.

There is also concern about market unease ahead of the European Central Bank’s June meeting, where it will have to review its March decision to speed up its pandemic emergency bond purchases. The ECB can start phasing out emergency measures when the pace of coronavirus vaccinations reaches a critical level and the economy picks up speed, Vice President Luis de Guindos said.