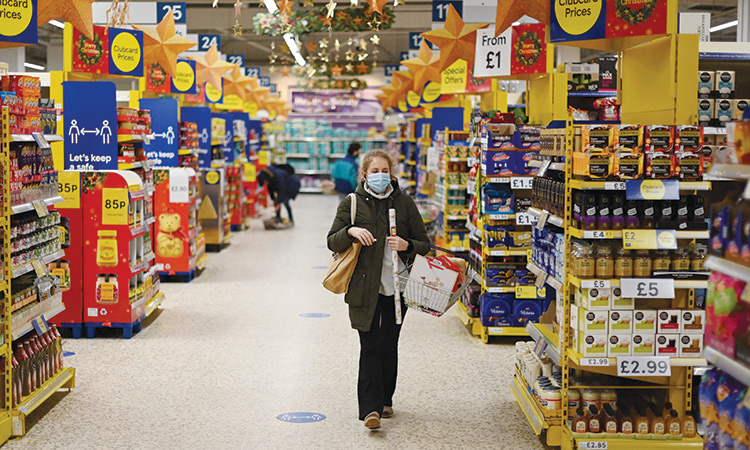 A shopper walks the aisles of a Tesco supermarket in London. Agence France-Presse

British workers’ average hourly output rose by 0.4 per cent last year, despite a fall of nearly 10 per cent in total production due to the coronavirus pandemic, as lower-paid jobs bore the brunt of COVID lockdown measures.

Britain’s Office for National Statistics said the productivity impact of last year’s economic collapse - the biggest in more than 300 years - differed from the 2008-09 financial crisis due to the types of jobs affected.

“Although there was substantial volatility during the year, this contrasts with a slow and steady decline in productivity during the 2008-09 economic downturn,” the ONS said.

Many workers in relatively low-paid retail and hospitality roles lost their jobs or were furloughed last year, while employees able to work from home were typically in higher-paid sectors which boost the productivity numbers.

During the 2008-09 recession, there was a greater loss of high-paid financial services jobs, exacerbating a longer-term slide in productivity growth which began before the crisis and persisted for years afterwards.

The ONS said productivity within the retail sector itself increased sharply during the second half of last year as businesses partly reopened and a shift to online shopping intensified.

Online retail employs fewer staff compared with traditional stores, and those shops which did stay open - such as supermarkets - tended to be larger than average, both factors which boost measured productivity.

However, output per hour in the public sector was 13.0 per cent lower in the final quarter of 2020 than a year before. The ONS said this reflected a sharp increase in COVID-related spending - such as on costly personal protective equipment and COVID testing programmes - while measured output fell slightly.

Output per hour for the whole economy in the final quarter of 2020 was 0.7 per cent lower than a year earlier, a slightly smaller decline than an earlier flash estimate of a 1.1 per cent decline.

BRITAIN’s RETAILER: Meanwhile the Tesco, Britain’s biggest retailer, reported a 20 per cent drop in full-year pretax profit as the cost of adapting the business for the pandemic wiped out the benefit of “exceptionally strong” grocery sales.

With restaurants and cafes shut for large parts of the last 12 months, supermarkets saw a surge in demand online and in stores as shoppers stocked up on food during lockdowns.

“Everything about this last year has been exceptional,” Chief Executive Ken Murphy told reporters on Wednesday. “We were the quickest out of the blocks to respond to the pandemic.”

He said customers shopped a third less frequently, but their baskets were about 50 per cent bigger.

Online sales, where Tesco has 35 per cent of the market, surged 77 per cent to 6.3 billion pounds ($8.7 billion) in Britain, with click and collect accounting for a quarter of online orders by year end.

“It’s quite phenomenal to think that a business can literally double the number of online slots to 1.5 million (per week) in a matter of weeks,” Murphy said.

Tesco took on nearly 50,000 temporary staff to cope with the higher demand and cover self-isolating workers, while it also had to adapt its stores and online picking for social distancing.

Shares in Tesco fell 3 per cent, the worst performer on the FTSE 100 as the retailer said uncertainty around a recovery made it difficult to predict the year ahead.

It said its best estimate was for retail operating profit to recover to a similar level as in 2019/20, the year before the pandemic.

UBS said that result would be about 4 per cent, or 100 million pounds, lighter than consensus expectations.

Murphy said the pandemic had shown that Tesco was an agile business.

Online volumes would “contract somewhat” as more customers returned to stores but productivity would continue to improve, he said, adding that online was profitable when given its full allocation of fixed costs.

Other pandemic changes set to stay included more convenience food in neighbourhood stores versus those in city centres to cater for customers continuing to work more from home, he said.

“There will undoubtedly be a greater importance of digital and virtual in the future, but we think that stores will continue to be the backbone of our business.”

The combination of large stores and a full online offer has helped Tesco and its major UK rivals Sainsbury’s, Asda and Morrisons regain some ground lost to discounters Aldi and Lidl, industry data has shown. Customers making fewer trips in the pandemic have wanted larger ranges and more space to shop.