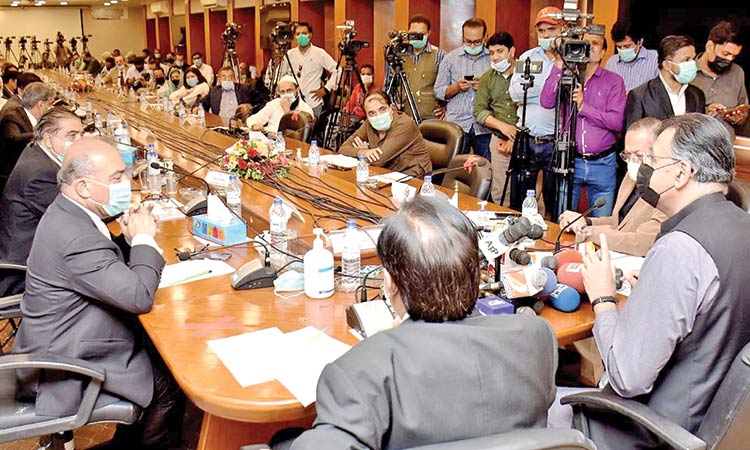 Asad Umar addressing the members of the Federation of Pakistan Chambers of Commerce & Industries at the Federation House in Karachi on Saturday. News Network International

He said that in the second phase of the CPEC projects relating to agriculture, industry and employment were being planned.

In the first phase of CPEC basic infrastructure, energy sector particularly hydro-electrical power generation were given priority, he said and added that a multibillion dollar railway project ML-I was in advanced stage and remarkable progress has been achieved in lieu of financing of the project. The joint committee on CPEC would consider the project in its next meeting, he informed.

Talking to media persons during his visit to Federation of Pakistan Chambers of Commerce and Industry (FPCCI) in Karachi, Asad Umar supported the Sindh government’s decision to close down markets for two days in a week in Karachi.

The federal minister declared that inflation is the biggest challenge for the PTI government.

He said that work on Rashakae and Faisalabad trade zones was also in progress. The entire work on western corridor of the CPEC has been carried out by PTI government while during previous governments the important segment of the project was marred by conflicts and confusions, he said.

On a question regarding Karachi Package, Asad Umar informed that most of the projects would be completed in current year as federal government was actively pursuing the projects under Rs1,100 billion Karachi development package.

The busses under mass transit project Green Line would start plying on roads of the metropolis in August this year, the minister said and added that design of Karachi Circular Railway was completed as well and work could be started by the end of the year.

Initial work on Karachi Trade Corridor - another important project for laying a dedicated railway line from Karachi port to Pipri with estimated cost of Rs130 billion - started as well and it was expected that tenders of the project under BOT mode would be floated this year, the minister informed.

The WAPDA resumed work on K-IV project that was suspended since previous two years and its completion might be achieved in second half of 2021, he claimed.

The federal government took responsibility of improving rainwater drainage system of Karachi with a focus on Mehmoodabad, Korangi and Gujar Nullah and work was in full swing, he said, adding encroachments have been removed, compensation amount had been paid to affected population of Mehmoodabad.

Asad Umar while terming the electricity as a major issue of Karachi said federal government committed to add 900 megawatt in K-Electric’s system but it was going to add more than 1,000 megawatt as 450 megawatt project of KE would be commissioned in May while NTDC would be able to provide additional 650 megawatt as well.

Rationalisation of electricity price for industrial sector by PTI government has accelerated industrial activities while large scale manufacturing sector has seen a record growth over 10 per cent, he claimed and added besides increased production of car and cement manufacturing, first time in history of Pakistan quantum of monthly exports remained above $2 billion for consecutive seven months.

On a query about trade with India, the federal minister cleared that Prime Minister Imran Khan has taken a principled step and directed to explore alternate avenues for expansion of regional trade instead of relying on bilateral trade with eastern neighbouring country as oppressive actions of India in illegally occupied Jammu and Kashmir could not be overlooked.

On a question about value of rupee against US dollar, Asad Umar said PTI through its prudential policies stabilized the exchange rate and value of dollar fallen to Rs152 from 168 without spending a single rupee of foreign exchange reserves.  On a query regarding COVID-19 measures, Asad Umar said that he supports decision of Sindh government for closing markets on weekends and said that such measures were necessary to reduce the risks and keep number of patients lower.

Economic sector vulnerable to coronavirus needed to be closed to save precious lives as without timely measures all the sectors of economy could suffer more, he said adding that government was cognizant of issues being faced by business and industry particularly the labour force due to lockdowns but every citizen has to play individual role in this situation. Replying to another question, Asad Umar was optimistic that Pakistan Steel Mills could be made fully operational and profitable entity and there was no reason to shut it down. 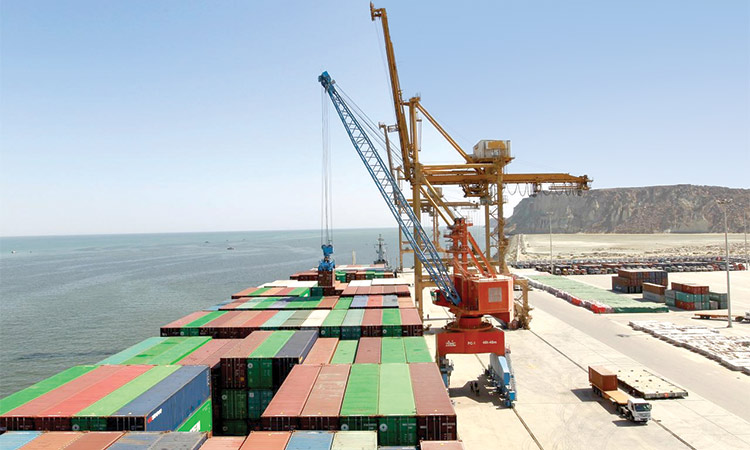