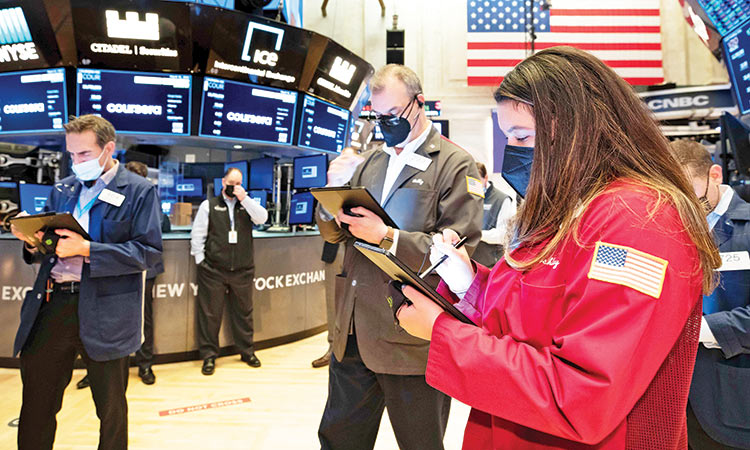 The Organization of the Petroleum Exporting Countries, Russia and other allied producers, a group known as Opec+, were considering output policy on Thursday.

The group is debating options for May and beyond, including whether to roll over existing cuts or gradually increase production, three Opec+ sources said.

Russian Deputy Prime Minister Alexander Novak said in the meeting that he expected global oil demand to grow by 5 to 5.5 million barrels per day (bpd) this year.

Opec+ has reduced output by about 7 million bpd to support prices and reduce oversupply. In addition, Saudi Arabia made an extra 1 million bpd voluntary cut.

“Given the recent wobble in prices, along with demand concerns re-emerging once again, there is a growing consensus that the Opec+ will likely roll over current cuts for an additional month,” ING analyst Warren Patterson said.

Opec+ has trimmed its oil demand growth forecast for this year by 300,000 bpd because of renewed lockdowns.

France entered its third national lockdown and schools closed for three weeks to try to contain a third wave of COVID-19 infections.

Despite the new wave, European markets have recovered most of their pandemic-driven losses on strong manufacturing activity.

March data showed euro zone factory activity growth galloped at its fastest pace in the history of the survey.

Oil also found some support after President Joe Biden outlined a $2.3 trillion spending plan to invest in traditional projects, such as roads and bridges, alongside tackling climate change.

But market sentiment was tempered by an unexpected rise in US claims for unemployment benefits.

Oil prices rallied with the OPEC+ alliance expected to agree an extension to their current output cuts at a meeting underway. Shares in Deliveroo steadied one day after the app-driven meals delivery group lost more than a quarter of its value on its stock market launch in London.

Biden said his much-anticipated new package will see a “once-in-a-generation” investment of more than $2 trillion in transportation, telecoms and energy infrastructure while creating millions of jobs.

And while he warned his eight-year plan, which comes just months after the passage of a $1.9 trillion stimulus, will be paid for by higher taxes for corporations, analysts said markets likely considered that a concern for later this year or next.

“There is no doubt that these markets are addicted to stimulus, and any news which has stimulus inside it, is welcomed by market players with open arms,” noted Naeem Aslam, chief market analyst at AvaTrade.

While there is growing concern that the fast recovery will fan inflation and force banks to tighten their ultra-loose monetary policies, observers remain confident that stocks will press higher this year.

But in an indication that the government spending to prop up the recovery is needed, new applications for jobless benefits in the US jumped last week, reversing most of the improvement in the prior week when the total dipped below 700,000 for the first time since the pandemic shuttered the US economy.

“The key takeaway from the report is that while claims have been trending in the right direction for months, the overall downtrend continues hitting speed bumps like the unexpected increase that was captured in today’s report,” said Briefing.com analyst Patrick J. O’Hare.

Analysts will be watching closely on Friday the non-farm payrolls report, which is used as a key guide to the health of the world’s top economy.

Some observers are suggesting the figure could come in above a million new jobs.

On the Covid front, the World Health Organization on Thursday slammed Europe’s vaccine rollout as “unacceptably slow” as the region sees a “worrying” surge in coronavirus infections.

The organisation said the sluggish rollout was “prolonging the pandemic” and described Europe’s virus situation as “more worrying than we have seen in several months.”

It comes after French President Emmanuel Macron announced a limited nationwide lockdown to battle soaring Covid-19 cases, while Brazil feared further devastation was ahead after its deadliest month of the pandemic so far.

Brent slumped to $22.5 a barrel leaving it down 65% for the year and hammering petro currencies such as Russia's rouble, Mexico's peso and the Indonesian rupiah by as much as 2%.