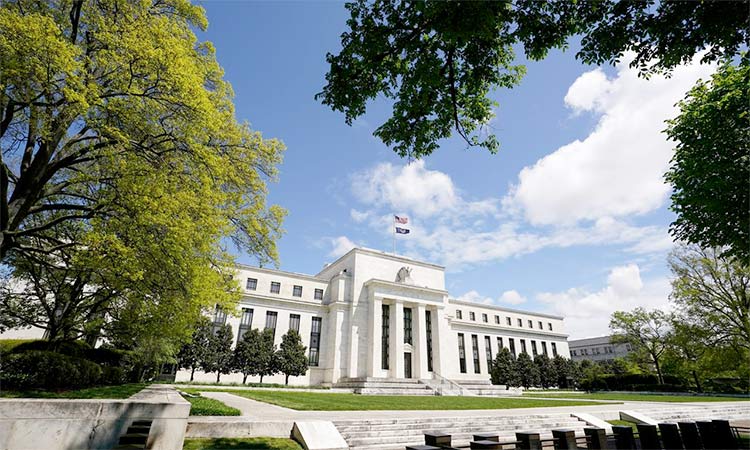 The Federal Reserve building in Washington.

The Fed said it will not extend the relief from what is called the supplementary leverage ratio past March 31. The easing of the regulation had been intended to give banks flexibility in what assets they could hold to meet regulatory’ requirements during the turmoil of the pandemic, when banks were having to suddenly write down billions of dollars of loans.

The banking industry had lobbied for an extension of the relief but on Thursday the Fed said that since the requirements were relaxed last year “the Treasury market has stabilized.”

Shares of the large Wall Street banks fell in early trading, with JPMorgan Chase and Wells Fargo down around 3%. The Dow Jones Industrial Average dropped 263 points, or 0.8%. The yield on the 10-year Treasury rose to 1.74% from 1.70%

The supplementary leverage ratio requires large banks to hold capital equal to about 3% of their assets. The required ratio is higher - 5% - for banks that are deemed most important to the overall financial system The rule was adopted as part of regulatory reforms after the 2007-2008 global financial crisis and recession. The idea was to ensure that banks kept enough capital on hand to survive market meltdowns.

Yet the rule has also been blamed for magnifying the turmoil that erupted in the financial markets a year ago when the pandemic first hit hard. Banks, foreign central banks and hedge funds, among others, had desperately sought to dump Treasurys and other bonds to raise cash. Treasury yields spiked in response. To calm the lending markets, the Fed stepped in to buy hundreds of billions of dollars of Treasurys on its own.

The financial industry argues that the rule discourages banks from holding Treasurys because doing so increases their assets and reduces their supplementary leverage ratio. This undermines their ability to act as intermediaries in the Treasury market and facilitate trading, banks assert.

Another issue is that the Fed’s Treasury purchases have flooded the banking system with cash reserves. These reserves lower a bank’s SLR by increasing its assets. Total bank reserves now stand at nearly $3.5 trillion, up from roughly $1.5 trillion before the pandemic.

Treasurys are considered low risk and cash reserves are regarded as risk-free. But the SLR, unlike other bank capital requirements, doesn’t take risk into account.

A year ago the Fed temporarily exempted Treasury securities and cash reserves from the SLR calculation. That exemption is set to expire March 31. Bank lobbyists argue that without an extension of the exemption, large banks will be less likely to hold Treasury securities.

If that were to happen, interest rates could rise, making loans more expensive. The yield on the 10-year Treasury serves as a benchmark for mortgage rates and other borrowing costs. Banks also say that ending the exemption will discourage them from making loans, which would reduce their capital.

But some high-profile Democrats in Congress oppose continuing the exemption, thus heightening the pressures the Fed is facing. Earlier this month, Sens. Elizabeth Warren, D-Mass., and Sherrod Brown, D-Ohio, urged Fed Chair Jerome Powell and other top banking regulators to reject the banks’ push for an extension.

“The banks’ requests for an extension of this relief appear to be an attempt to use the pandemic as an excuse to weaken one of the most important post-crisis regulatory reforms,” the senators wrote.

If banks worry about running short of capital, Warren and Brown said, they could bolster their balance sheets by suspending dividend payouts.

“We are also confident that the thousands of community banks that are not subject to the SLR requirements would be happy to accept deposits that large banks may reject,” they said.

Big US banks will have to resume holding an extra layer of loss-absorbing capital against US Treasuries and central bank deposits from next month after the Federal Reserve said it would not extend a temporary waiver that had exempted those assets from a key bank leverage rule.

On Friday, the Fed said it would, however, review the “supplementary leverage ratio” rule due to concerns it is no longer functioning as intended as a result of the central bank’s emergency pandemic monetary policy measures.

Shares of the largest U.S. banks dropped in pre-market trading on Friday immediately following the Fed’s announcement. JPMorgan Chase & Co was down nearly 2%, while shares of Wells Fargo & Co, Bank of America Corp and Citigroup Inc tumbled roughly 1.5% each.

To ease stress in the Treasury market sparked by the COVID-19 pandemic and to encourage bank lending as American households and businesses struggled amid lockdowns, the Fed last April excluded US Treasuries and central bank deposits from the leverage ratio until March 31 this year.

Uncertainty over whether the Fed would stick to that expiration date has added to recent anxiety in fixed income markets. Analysts have said allowing the rule to expire could push banks to cut back on government debt and reduce the funding for other investors to buy bonds.