Turkey emerges from pandemic with 1.8% economic growth in 2020 - GulfToday 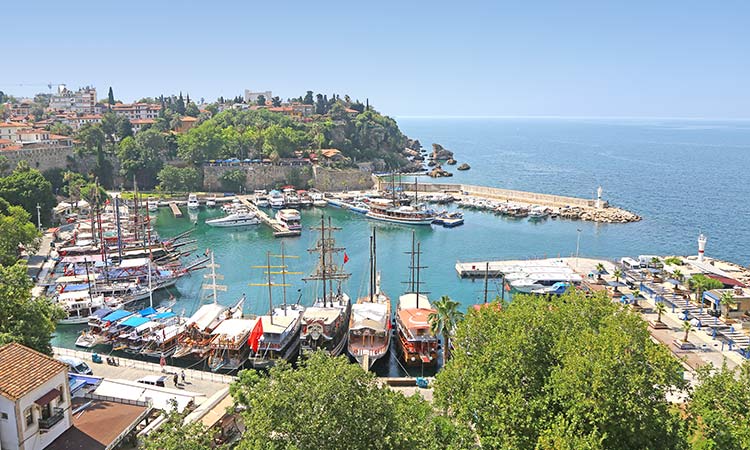 The old town and the historic port are seen in the southern resort city of Antalya, Turkey. File/Reuters

Propelled by a burst of credit in mid-2020, fourth-quarter gross domestic product (GDP) grew 1.7 from the previous quarter on a seasonally and calendar-adjusted basis, the Turkish Statistical Institute said.

A surge in gross domestic product growth in the second half of the year that surpassed Turkey’s potential rate was driven by a near doubling of lending by state banks to face down the initial wave of the virus.

While outperforming all emerging market (EM) and G20 peers except China, Turkey’s growth came at a price: The cheap lending accelerated a record drop in the lira, drew down the foreign currency reserves and helped push inflation to 15 per cent. Also, few jobs were created.

The recovery was “unbalanced and ultimately exacerbated some of the country’s external vulnerabilities,” said Jason Tuvey, senior emerging market economist at Capital Economics.

Tourism and other services activity dropped by 4.3 per cent and the construction sector, an engine of growth in years past, shrank 3.5 per cent.

The lira firmed to 7.351 against the dollar after the GDP data and was 1 per cent stronger on the day.

Finance Minister Lutfi Elvan, appointed in November, said in Twitter on Monday that Turkey would prioritise price stability this year. Analysts say the economy should expand by roughly 5 per cent in 2021 despite tight monetary policy.

In a Reuters poll, GDP was forecast to have expanded 7.1 per cent year-on-year in the fourth quarter of 2020, despite new curfews and curbs on the service sector to address a second COVID-19 wave, and 2.3 per cent for the whole year.

World economies mostly contracted and tumbled into recessions last year, with emerging and developing nations shrinking by some 2.4 per cent according to the International Monetary Fund (IMF).

The major EM economy has cooled in recent years from an average 5 per cent growth rate in the last two decades.

The rate plunged by 10.3 per cent annually in the second quarter as the pandemic bit, but rebounded sharply by 6.3 per cent in the third quarter.

Ankara is considering lifting some of the latest virus restrictions as of this month.

Tuvey of Capital Economics said the shift in November to more orthodox policies helped Turkey avoid “a full-blown balance of payments crisis”, and he predicted a sustained recovery may not come until the second half of this year.

Meanwhile the Turkish factory activity grew at a slower pace in February as new orders contracted slightly, a survey showed on Monday, although manufacturers continued to expand production and add staff.

The headline index reading fell to 51.7 in February from 54.4 a month earlier, data from the Istanbul Chamber of Industry (ICI) and IHS Markit showed, staying above the 50 mark that separates expansion from contraction.

Signs of improvements in demand led manufacturers to expand production despite a slowdown in new business and issues with the supply of raw materials.

Input costs and output prices continued to rise but at a slower pace mainly due to higher raw material costs, with a strengthening of the lira helping lead to softer inflationary pressures.

“Although there were signs of softening new order inflows in February, the overall Turkey Purchasing Managers Index (PMI) remained in positive territory as firms shrugged off a pause in new order growth and continued to raise production and employment,” said Andrew Harker, economics director at IHS Markit.

“There was also good news on the inflation front. Although supply issues are causing higher raw material prices globally, an appreciation of the Turkish lira has helped to mitigate these pressures,” Harker also said.