Chinese step up focus on food security in their policy paper 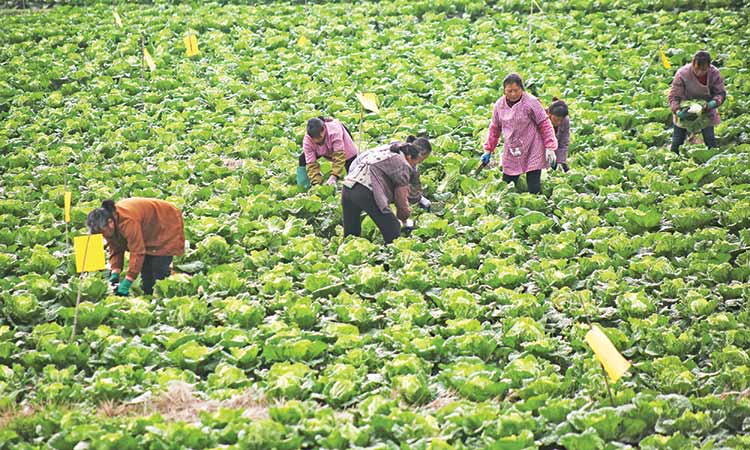 China will put greater pressure on its regions to boost grain yields and step up support for its domestic seed industry as it strengthens its focus on food security after the COVID-19 pandemic, a major policy document issued showed.

The annual rural policy blueprint, known as the “No. 1 document”, placed greater emphasis on food security than in prior years, calling for all provinces to improve grain yields during the 2021-2025 period.

Beijing, which has long prioritised food security for its population of 1.4 billion, has strengthened its focus on the issue since the pandemic hit major food exporting nations last year and raised concerns about stability of food supplies.

“The uncertainty and instability of the external situation has increased significantly. On grain security, we must not take it lightly for one moment,” Tang Renjian, agriculture minister, told a media briefing on Monday, noting that China’s population was still edging higher.

The document, published by the State Council, China’s cabinet, noted that Communist party committees will also shoulder responsibility for food security, in addition to local government.

China will build a “national food security industry belt”, it added, a plan also outlined during a key economic policy meeting in December.

The belt aims to connect all of the country’s key grain areas, officials said at the time. The document also reiterated the new priority on the seed sector, seen as key to food security, urging faster implementation of major scientific projects in breeding. It urged the “industrial application of biological breeding,” using a term that encompasses genetically modified crops among others.

It also called for stronger protection of intellectual property rights in breeding, and support for leading seed companies to establish commercial breeding systems.

“It is necessary to select a group of superior enterprises to give priority support,” Zhang Taolin, vice agriculture minister, said at the briefing.

Shares of seed firms including Beijing Dabeinong Technology Group Co, Shandong Denghai Seed and Winall Hi-tech Seed Co were all up around 4% on Monday.

China will also stabilise production of soybeans and develop edible oilseed crops including rapeseed and peanut, it said, amid tighter global supplies of edible oils, and will diversify its imports of agricultural products.

It also called for the building of a modern animal farming system and protecting the production capacity of hogs. Despite recent concerns about a surge of disease over the winter, Tang said on Monday China’s hog herd will recover to 2017 levels by June, reaching numbers not seen since the outbreak of African swine fever.

However, he said the country needs to find ways to make the herd more stable and prevent farmers from slaughtering sows when prices fall.

China will speed up recycling and utilisation of renewable resources such as metals scrap in an effort to build low-carbon development and meet its carbon neutrality goal, the State Council said on Monday.

The State Council, China’s cabinet, urged local governments and related authorities to improve recycling system of waste and used home appliances and to establish a recycling system to increase utilisation and output rates of renewable resources such as scrap metals and plastics.

China had allowed imports of high-grade copper and aluminium scrap in November 2020 and gave the approval for high-grade steel scrap imports starting 2021 to meet robust demand of the materials.

The cabinet also asked to increase usages of renewable resources and “develop hydrogen energy and biomass energy... according to local conditions,” it said in a statement on its website.

“By 2025... discharge of major pollutants will continue to decrease, carbon emission will significantly reduce,” said the State Council.

President Xi Jinping had promised to bring China’s carbon emission to a peak within a decade and to achieve carbon neutrality by 2060.

China’s benchmark lending rate is set to stay unchanged for the 10th straight month at its February fixing on Saturday, a Reuters survey showed.

Thirty-one traders and analysts, or 88 per cent of all 35 participants, in a snap Reuters poll conducted this week predicted no change in either the one-year Loan Prime Rate (LPR) or the five-year tenor.

Another three respondents expected an increase of 5 basis point to both tenors this month, while the other one predicted a marginal rate cut to the one-year LPR.

Strong expectations for a steady LPR this month came after the People’s Bank of China (PBOC) rolled over the maturing medium-term lending facility (MLF) on Thursday, while keeping the interest rate unchanged for a 10th straight month.

The MLF, one of the PBOC’s main tools in managing longer-term liquidity in the banking system, serves as a guide for the LPR.