Business Bureau, Gulf Today
The UAE has been ranked first in the Middle East and Africa region in terms of the number of new foreign direct investment (FDI) projects in the country’s Biotechnology sector. The UAE was also ranked third in the region in terms of the volume of capital invested in these projects during the period from 2003 to 2020.

The rankings were revealed by the FDI Markets Index, which was recently issued by the Financial Times’s FDI Intelligence magazine, which specializes in foreign investment trends around the world. The index monitors capital flows and new foreign direct investment projects around the world and identifies the best FDI destinations in the world through reference comparisons.

Dr Thani bin Ahmed Al Zeyoudi, Minister of State for Foreign Trade, said that these advanced rankings achieved by the UAE in the field of foreign direct investments in Biotech once again underlines the country’s leading position in the regional and global investment landscape, thanks to the vision and support of its wise leadership.

This recognition is the latest milestone in the UAE’s record of achievements in various fields related of economic development and its commercial and investment environment’s attractiveness, especially in the innovative and futuristic sectors.”

He added: “Over the past years, the UAE has succeeded in consolidating its position as an attractive destination for investments and business, and today, it is reinforcing its position as a regional and global hub for investment in the sectors of the new economy. This latest recognition is set to further strengthen the confidence of global investors in the efficiency and quality of the UAE’s business climate and highlight the extent of development and readiness of its markets to be a preferred destination for future projects.”

Al Zeyoudi added that the UAE government is continuing its efforts to enhance the policies that attract foreign investments and expand the scope of incentives and facilities for companies and investors. Among the most important steps taken in this regard is the recent amendment of the Federal Law on Commercial Companies, which represents a milestone in increasing the flexibility and sustainability of the business climate in the country.

This amendment now enables full foreign ownership of projects and companies and liberates all sectors before foreign direct investments, with the exception of some activities with a strategic impact.

He affirmed that the amendments to the law will open up new horizons for investments in the sectors of the future economy and will provide more incentives to attract successful companies and best international talents and competencies to run their businesses out of the country.

He added: “Thanks to the unlimited support and the forward-looking vision of its wise leadership, the UAE today has all the competencies needed to be one of the prominent global destinations in the field of Biotech. The result of the index shows that the largest number of Biotech projects in the Middle East and Africa exist in the UAE. This achievement is the result of the efforts exerted by the country in developing a strong and integrated infrastructure for Biotechnology projects and an associated R&D system, especially by strengthening this trend among university students and academic institutions. Many research and innovation centers have also been established in this field, such as the Dubai Science Park Lab Complex, the Al Jalila Foundation for Medical Innovation, the Research Bank UAE of the Ministry of Health and Prevention, and many other institutions, facilities and projects specialized in modern biological technologies.

He further noted the importance of systematic and integrated response adopted by the country in the face of the COVID-19 pandemic across various sectors, including health and the economy, and the increased focus in the economic recovery and advancement plan adopted by the country. The UAE’s ongoing transformation towards a flexible and sustainable economic model is set to further enhance opportunities and prospects for the rapid growth of projects in the sectors of the future such as Biotechnology, which will cement the UAE’s position in this sector in the coming years.

In an interview with the Emirates News Agency (WAM), on the occasion of the launch of “Dubai Week in Africa-Kenya” forum on Monday, Dr. Thani bin Ahmed Al Zeyoudi, Minister of State for Foreign Trade, said that the value of non-oil trade between the UAE and Africa amounted to $50 billion in 2019, compared to $33 billion in 2015.

He said that the commercial exchange between the UAE and Kenya has witnessed significant growth from 2015 to 2019, amounting to nearly $2.7 billion, compared to $1.5 billion in 2015. 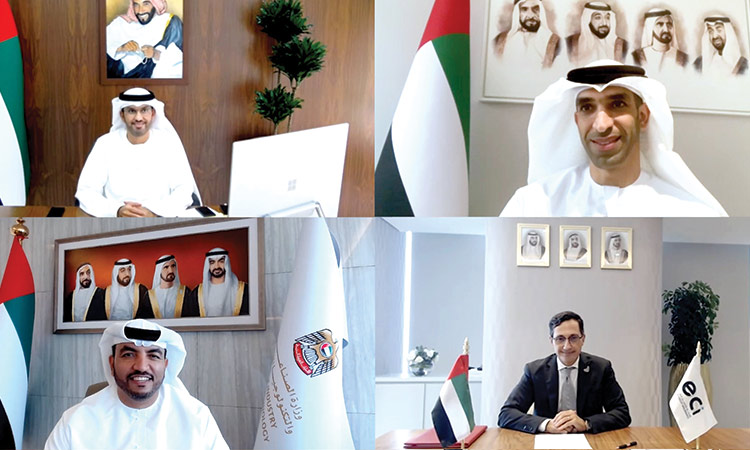 UAE to boost competitiveness of the global industrial sector

The Ministry of Industry and Advanced Technology (MoIAT) and Etihad Credit Insurance (ECI) on Tuesday signed a Memorandum of Understanding (MoU) to inject capital into the UAE’s industrial sector and support local industrialists.