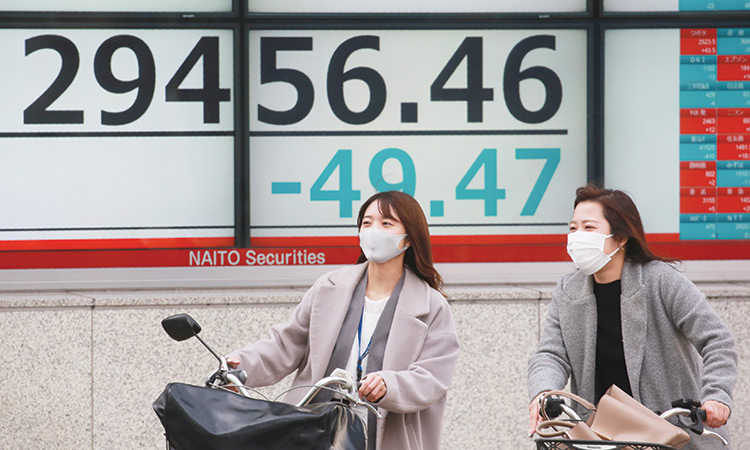 Cyclists pass by an electronic stock board of a securities firm in Tokyo on Wednesday. Associated Press

Japanese stocks ended higher in choppy trading on Wednesday after positive earnings from market bellwethers Toyota and Honda highlighted the improving outlook for the global economy.

This year, the Nikkei has rallied more than 7% to its highest level since 1990 as investors bought shares of Japanese exporters which are expected to benefit as the global economy recovers from the COVID-19 pandemic.

Stocks have risen so quickly that some traders warn that a correction is overdue, but most analysts say the Nikkei is still on track to reclaim the psychological important 30,000 mark because the earnings season so far been better than expected. “A lot of investors are buying on dips, which shows that the mood is positive,” said Masahiro Yamaguchi, head of investment research at SMBC Trust Bank.

“The global economic recovery will become more concrete as the year progresses, which benefits Japanese companies that are sensitive to global growth.”

Toyota Motor ended up 1.7% after briefly touching its highest level in more than five years as the company reported a bigger-than-expected increase in earnings and raised its forecasts.

Another prominent gainer was Honda Motor Co, which rose 5.14%, after the automaker upgraded its earnings forecasts.

The biggest decliner on the Nikkei was Japan Tobacco Inc , which tumbled by 7.46%, after cutting its dividend and announcing restructuring.

So far this earnings season, 80% of Japanese companies have beaten forecasts for the December quarter, according to Refinitiv data.

There were 116 advancers on the Nikkei index against 102 decliners.

The volume of shares traded on the Tokyo Stock Exchange’s main board was 1.16 billion, compared to the average of 1.23 billion in the past 30 days.

Toyota Motor Corp said on Wednesday it has an up to four-month stockpile of chips and was not immediately expecting a global chip shortage to hit production, as it jacked up its full-year earnings forecast by a bigger-than-expected 54%.

Unlike other automakers, including Japanese peers Nissan Motor Co and Honda Motor, that have had to cut production because of semiconductor shortages, Toyota raised output for the fiscal year ending March.

Shares in Toyota, the world’s biggest automaker by vehicle sales, closed up 1.7% after hitting their highest level since July 2015.

“For the near term, we do not see any decrease in production volume due to the chip shortage, but we do see risks of a chip shortage,” Chief Financial Officer Kenta Kon said during a briefing.

Kon said Toyota had heard chip shortages globally might continue until the summer, though the situation might resolve itself earlier.

Asked about why the automaker is seeing limited impact compared with competitors, Kon said Toyota has been constantly providing its short-term and long-term production volume plans to suppliers.

The automobile industry has been grappling with a chip shortage since the end of last year, which has in some cases been exacerbated by the former U.S. administration’s sanctions on Chinese chip factories.

But the maker of the RAV4 SUV crossover and Prius hybrid said it expects to sell 9.73 million vehicles this year, up 3.3% from a previous forecast of 9.42 million yet still down from last year’s 10.46 million.

“The fact that Toyota isn’t largely affected by the chip shortage now is an encouraging catalyst,” said Hideyuki Suzuki, a general manager of investment research at SBI Securities.

The automaker now expects the yen to trade at 105 yen against the U.S. dollar, versus a previous forecast of 106 yen.

The sales rebound led by China, the world’s biggest auto market, comes as driver demand for new models including electric vehicles and autonomous drive cars grows. A global shortage of semiconductors, however, is forcing Honda and its global peers to trim vehicle production. 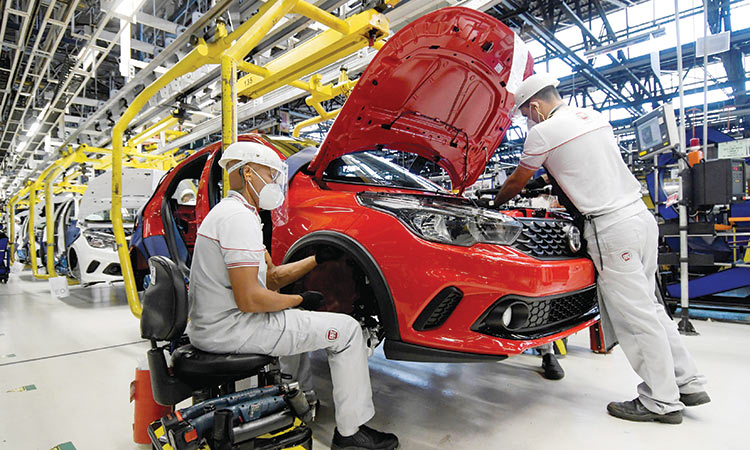