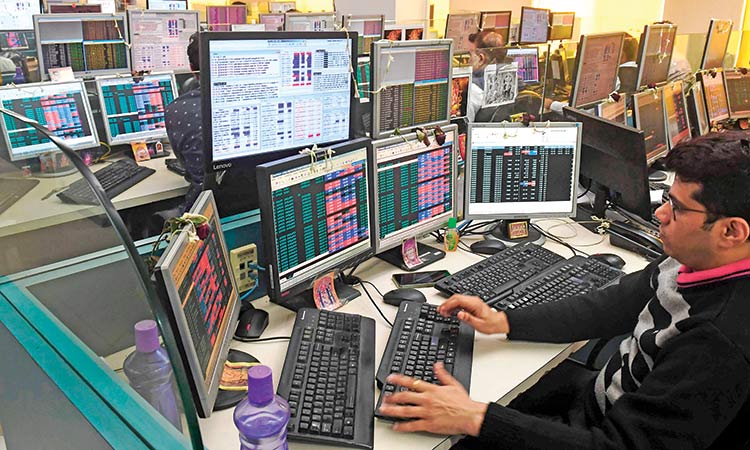 An employee works in a share trading firm in Kolkata. Agence France-Presse

Investing community continued to cheer the fact that the budget did not announce any additional burden in terms of taxes or cess on citizens and corporates. Amongst sectors, buying was witnessed in Media, Banking and Auto indices.

Banking stocks surged after the Finance Minister on Monday announced that two public sector banks will be privatised apart from the IDBI Bank in the upcoming financial year.

Notably, the Sensex reclaimed the 50,000 mark in the initial hour of rally. However, a bout of profit booking dampened sentiments.

“Our market opened on a positive note on back of favourable cues from global bourses and continued its bullish momentum of previous session.”

According to Gaurav Garg, Head Research, CapitalVia Global Research: “The market opened on a positive note after yesterday’s rally at 14,481.10 following the budget but soon the market saw profit booking and is currently trading near day’s low.”

“There has been a lot of positives in the market from the budget. The budget came out better than expected, the big surprise is the 34 per cent on-year increase in infrastructure capex next fiscal to Rs 5.54 lakh crore. This is positive for the entire engineering and construction space and has impacted cement sector as well.”

“It is a reaction to the budget as well as short-covering. This will be there for a few days and we should be cautious at the current level” said AK Prabhakar, head of research at IDBI Capital in Mumbai.

In its federal budget, India boosted healthcare spending by 135%, lifted caps on foreign investment in its vast insurance market, and increased capital expenditure for 2021-22 by 35%.

“We have rallied almost 1,000 points for the budget. Whatever proposals were given, have been planned for one or two years. Nothing is going to happen tomorrow and valuations are already stretched.” Prabhakar said.

Among individual shares and sectors, the Nifty Bank Index rose as much as 4.7% to a record high, helped by a 6.9% jump in top private-sector lender HDFC Bank.

Infrastructure firm Larsen & Toubro climbed as much as 10% to an all-time high, making it among the top percentage gainers of the day.

Jaguar Land Rover parent Tata Motors gained 10% and was the top percentage gainer on the Nifty 50 after reporting a 27.6% rise in domestic sales in January.

The Nifty Auto index rose 3.4%. The index was also supported by a new vehicle scrappage policy announced in the budget.

Mortgage lender Housing Development Finance Corp added 5% ahead of its quarterly results, while Indigo Paints jumped as much as 84.4% in its market debut.