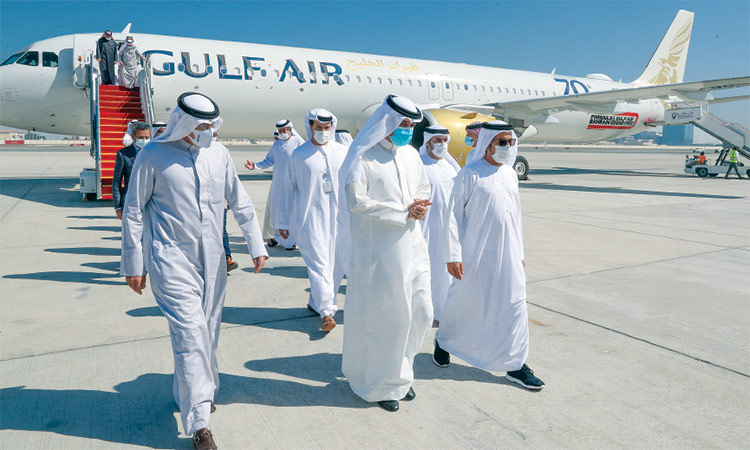 Officials of Abu Dhabi Fund for Development received a high-level delegation from Bahrain on Thursday.

A delegation from Bahrain arrived on Thursday in Abu Dhabi aboard an operational test flight following the completion of a project to build a new passenger terminal at Bahrain International Airport (BIA).

The facility has been expanded with a funding of Dhs3.7 billion ($1 billion) from Abu Dhabi Fund for Development, one of the UAE’s leading financial institutions.

The Fund facilitated the project on behalf of the UAE, which extended Dhs9.1 billion ($2.5 billion) to Bahrain in 2013 as part of its commitment to the GCC Development Programme.

The new terminal marked the completion of the first phase of the airport modernisation project that aims to stimulate Bahrain’s economic growth in line with the country’s Economic Vision 2030 by raising the airport’s strategic importance.

The new 210,000 square-metre terminal is four times the size of the existing one, enabling the airport to double its passenger handling capacity to 14 million annually.

Commenting on the project, Al Suwaidi said that the new facility marked a strong start to comprehensive development initiatives undertaken in Bahrain. He underscored the UAE leadership’s commitment and support to the country in its effort to bolster the economy and promote sustainable development. He pointed out that ADFD, in cooperation with the Bahraini government, had financed many projects in strategic sectors, such as housing, water, health and transport.

Kamal said that the visit to the UAE following the start of operations of the new passenger terminal came under the directives of His Royal Highness Prince Salman Bin Hamad Al Khalifa, Crown Prince and Prime Minister.

He highlighted the strong bilateral relations, praising the UAE for its contributions and commitment to developing strategic sectors in his country.

He noted that such gestures underscored mutual trust and commitments on which the relations between two countries were founded.

Saying that visit was undertaken to express Bahrain’s appreciation for the UAE and ADFD, he also expressed gratitude to ADFD for facilitating crucial development projects in the country, calling the entity a key strategic partner in Bahrain’s development effort.

“The airport expansion project will greatly benefit the Bahraini economy and enhance the role of its services sector, which is a priority economic sector for Bahrain to establish itself as a regional logistical hub,” Kamal said. “The project, which is one of the largest and most important in the civil aviation sector in more than 20 years, will revitalise tourism and commerce.”

The project includes many associated projects, including 5,500 carparks, two receptions, hospitality lounges for first and business class travellers, a building dedicated to private aviation, in addition to a central security gate, a building for fire and rescue services, an area for Duty Free outlets that is four times that of the current area, as well as an aircraft fuelling area. In addition, the new terminal houses a hotel that offers a variety of accommodation options.

The terminal is the largest green facility in Bahrain that has earned a Gold Certification from Leadership in Environmental and Energy Design (LEED), an internationally recognised green building certification system.

Bahrain is one of the first countries where ADFD undertook development activities in 1974. The Fund has financed 29 projects worth Dhs19.5 billion in various sectors to drive sustainable socioeconomic development in the country.

The Abu Dhabi Fund for Development continued to advance its sustainable development agenda within the country and abroad through clean-energy initiatives. The number of projects funded and completed by the Fund in 2020 - covering the renewable energy sector - reached 16 projects, amounting to Dhs622.6 million.

The projects worth Dhs117.3 million not just enabled the countries to reduce their carbon footprint by infusing a total of 14.38MW into the energy mix, but they also brought about a host of economic benefits. According to

In January of last year, the Fund announced an allocation of approximately Dhs384 million ($104.5 million) to eight renewable-energy initiatives under the seventh cycle of its partnership with the International Renewable Energy Agency (IRENA). Not to mention that it signed three loan agreements worth Dhs121 million ($33 million) with the West African nations of Togo, Niger and Liberia.

In July, it financed a waste-to-energy project in the Maldives, which earned a certification from Global Innovation Institute (GINI), a leading international professional certification, accreditation and membership association in the field of innovation. Under the facility, eight projects were to be funded in Antigua and Barbuda, Burkina Faso, Chad, Cuba, the Maldives, Nepal, Saint Lucia and Saint Vincent and the Grenadines.