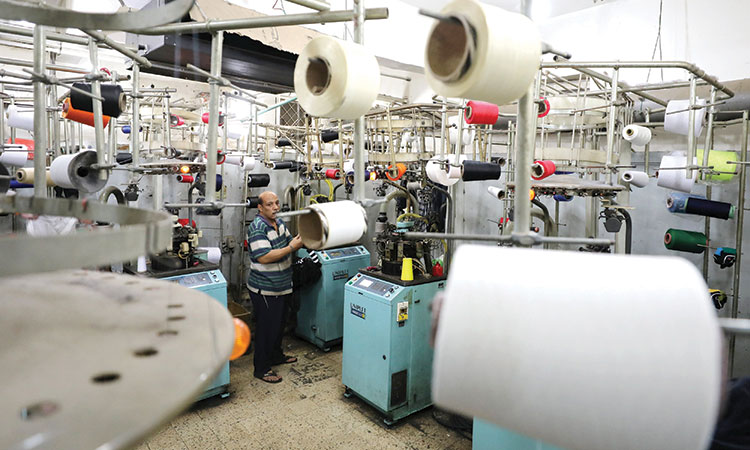 An employee at a spinning mill in Cairo, Egypt. File/Reuters

Data published for the first time by the finance ministry gives a glimpse of how numerous state companies have prospered over the last few years, while investment in the private sector has languished.

Revenues of 17 non-oil, state-run holding companies more than doubled over three years to 60.64 billion Egyptian pounds ($3.88 billion) in 2018-19. The calculations were based on the companies’ latest available results, published on the finance ministry’s website late last year.

Net profit after tax at the 17 holding companies - which together control about 180 smaller companies - more than quadrupled over the three-year period, the data shows.

Egypt’s economy was growing at nearly 6% before COVID-19 struck and economists say state-led activity has helped cushion the blow from the pandemic.

By contrast, private-sector activity as a whole - excluding the oil sector - expanded in only five of the 36 months from July 2016 to June 2019, according to IHS Markit’s Purchasing Managers’ Index (PMI).

Egyptian officials say they are working to boost the private sector for long-term growth after stabilising the economy and implementing widely praised reforms backed by the International Monetary Fund (IMF) that included devaluing the currency, removing most energy subsidies and imposing a value-added tax.

Egypt has not attracted the strong private investment that would help reduce poverty and absorb an estimated 800,000 workers entering the labour force every year, the World Bank said in its December report.

“The widespread presence of SOEs across the economy affects competition and distorts market outcomes,” the World Bank said.

Those sales have been delayed repeatedly by market downturns and more recently by the coronavirus pandemic. Tawfik did not respond to a request for comment.

The finance ministry published its data on state enterprises as a benchmark requirement under a $5.2 billion Standby Arrangement with the International Monetary Fund signed in June.

While there are still some state enterprises making losses, the finance ministry data showed a trend of swelling earnings growth.

The data shows that the cumulative revenue of 46 non-oil economic authorities, including the Suez Canal Authority, the Postal Authority and the loss-making Railway Authority, rose by 38.2% in the two years to June 2019.

“To raise your revenue by the margins (being seen by some state companies) I suspect would require a deliberate injection of cash or other help by the state,” said Timothy Kaldas, a non-resident fellow at the Tahrir Institute for Middle East Policy.

“This indicates that the government is doubling down on this sort of regime-led capitalism beyond the security sector.”

The finance ministry did not immediately respond to a request for comment on whether it was providing more support for state companies.

A finance ministry spokeswoman, however, said:

“The government plans to allow the private sector to manage several SOEs on behalf of the public sector in the transportation, tourism and housing sectors.”

Together the non-oil state holding companies and economic authorities accounted for about 5.6% of GDP in 2018-19.

Other state companies that saw a surge in profit between 2015-16 and 2018-19 include the two main state banks and Telecom Egypt, according to the finance ministry data, as well as construction giant Arab Contractors whose revenue climbed to 24.82 billion pounds in 2018-19, from 17.76 billion in 2015-16.

The International Monetary Fund raised its growth forecast for Egypt’s economy this financial year to 2.8%, matching the lower end of the government’s own estimate and citing milder-than-expected contraction during the coronavirus pandemic.

Egypt’s economy had been boosted in the last three years by an upswing in tourism, strong remittances from Egyptian workers abroad and recently discovered natural gas fields coming onstream.