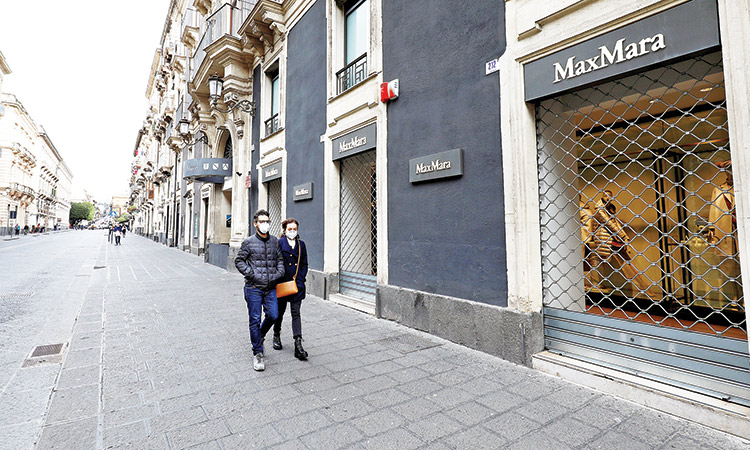 People walk past closed shops in the market due to tougher measures taken by the government to fight against COVID-19 in Catania, Italy, on Sunday. Reuters

Growth contracted by 3% in 2020, hit by lockdowns, border closures and a sharp fall in tourism during the pandemic, but the government and the International Monetary Fund (IMF) both predict a bounce of similar magnitude this year.

“This forecast depends on the assumption of continued economic activity without imposing any lockdowns, if the contrary happens, this growth estimate will not be achieved,” Mohammad Al Ississ told deputies during a budget speech in parliament.

The country’s public finances and balance of payments have been strained by the collapse of tourism and lower remittances from workers overseas, with unemployment soaring to a record 22% due to bankruptcies and layoffs.

But the gradual reopening of most of Jordan’s key business and manufacturing activities since last summer helped its economy temper earlier IMF estimates of a severe 5% contraction in 2020.

“The economic cost of the pandemic is huge. It had a deep negative impact on our economy that posted a contraction for the first time in decades,” Al Ississ said.

He added that the main goal of this year’s 9.9 billion dinar ($14 billion) state budget was to maintain fiscal prudence to help ensure financial stability.

The government sought to reduce the primary deficit to 3.7% of GDP from 5.7 % last year by maintaining the tempo of fiscal consolidation and reforms to combat rampant tax evasion and stamp out more than $1.4 billion in tax exemptions, he said.

Jordan’s commitment to IMF reforms and investor confidence in the country’s improved outlook helped it to maintain stable sovereign ratings at a time when other emerging markets were being downgraded, Al Ississ said.

Meanwhile, a blistering rally in the shares of regional banks may be tested when a spate of lenders report results in the coming week. Regional banks in the S&P 500 have surged 11% since the beginning of the year, beating out the gains in larger, more diversified banks by about a percentage point over the same period. Both regional and diversified banks are running well ahead of the benchmark S&P 500, buoyed by a rise in Treasury yields to their highest levels since the pandemic began on expectations that additional fiscal stimulus will spur economic growth.

Smaller banks often outperform during the early stages of an economic recovery because their earnings and revenues are more reliant on the products affected by higher Treasury yields than their larger competitors, which more often have additional revenue streams such as trading or capital markets divisions.

Upcoming earnings reports will show if that trend holds this time around. Much of the pain from COVID-19-fueled lockdowns has fallen on the smaller businesses and low-to-middle income consumers that are more likely to be customers of regional banks, said Ian Lapey, portfolio manager of the Gabelli Global Financial Services Fund.

“The large banks with the large customers are in better shape across the board” because of their greater access to credit markets and investment banking income, he said. This year “is going to be a challenging year for regional banks. Interest rates have moved up but they’re still very low and unemployment is still high and won’t recover quickly even with the vaccine.”

As a result, Lapey is only holding regional banks with “pristine credit quality” such as Webster Financial Corp and First Citizens Bancshares Inc, both of which are up more than 10% since the start of the year.

Regional banks, including Zions Bancorp, First Midwest Bancorp and United Community Banks Inc , are expected to report their quarterly results on Tuesday. Overall, larger banks will grow earnings by an average of 112% in the coming year while regional banks will grow their earnings by an average of 33%, said Dick Manuel, an equity research analyst at Columbia Threadneedle Investments.

At the same time, larger banks are trading at 11.5 times their anticipated 2022 earnings on average, compared with an average 13.3 times 2022 earnings multiple among the largest regional banks, Manuel said.

David Ellison, a portfolio manager who runs two financial funds at Hennessy Funds, sees little value in regional banks at a time when online lenders such as SoFi, PayPal and Square are poised to eat into their customer base for personal and small business loans.

“The reality is that these franchises are losing value at a faster rate because technology platforms are out there making loans electronically,” he said. “Kids are entering the banking system today through Robinhood or Venmo or SoFi, they’re not going down to the regional bank in their town.” 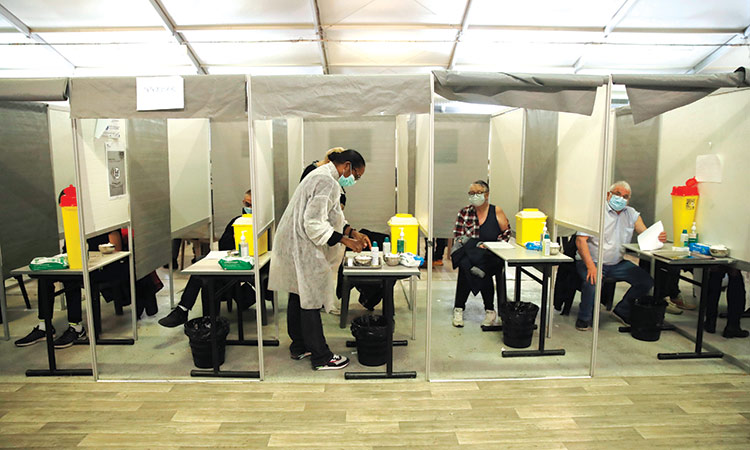 The French economy will expand by 5% in 2021, Economy Minister Bruno Le Maire said in a newspaper interview, as a third lockdown to tackle the coronavirus pandemic has prompted a downward revision in the previous government forecast for 6% growth.