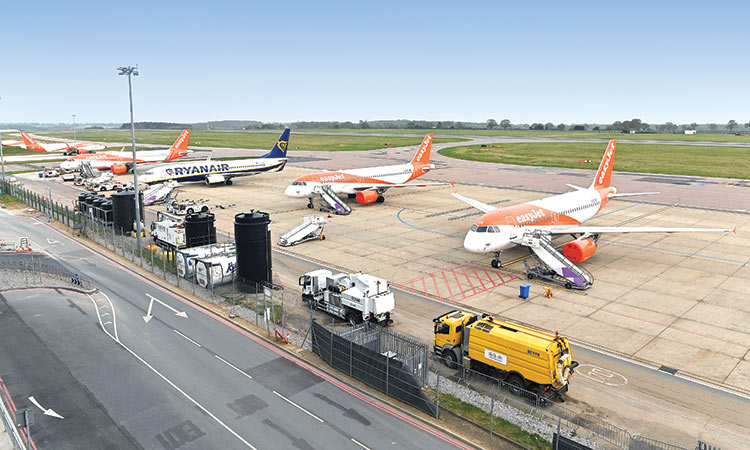 Grounded planes at an airport in London. File/Agence France-Presse

For a year expected to mark a turning point for pandemic-stricken European airlines, 2021 is off to a rough start. A resurgence of COVID-19 lockdowns has killed off a fragile bookings upturn, executives and analysts said, as insolvent Norwegian Air finally axed its long-haul operations on Thursday.

The setbacks deal a blow to airline hopes that the promise of vaccines would put the worst of the crisis behind them, and set the stage for a summer rebound.

New outbreaks and travel restrictions - some designed to curb the spread of a highly infectious virus variant detected in Britain - have hit forward bookings that are usually relied upon to bring in vital cash during the thin winter months.

Global airline industry body IATA believes a return to positive cash flow “might not arrive before the end of the year,” Chief Economist Brian Pearce said.

“Meanwhile the cash burn is going to continue” and may even in increase in Europe, Pearce told an online conference on Wednesday.

Some carriers may yet run out of cash, he added. For bailed-out airlines like Air France-KLM and Lufthansa, a longer slump increases both debt and the likelihood more support will be needed.

Europe faces the worst relapse - although hitherto buoyant Chinese and Russian domestic bookings have also been weakened by new restrictions.

Intra-European bookings for the first half of the year stand at 22% of their level 12 months ago, Olivier Ponti of aviation data specialist ForwardKeys said. That compares with 36% for US domestic bookings and 48% for flights within China.

Airlines have responded by cancelling yet more services. Ultra-low-cost carrier Wizz Air, which has been expanding its fleet and network during the crisis, is suspending most UK routes and sees January capacity down 75%.

“The lockdown puts strains on demand, and we’re adjusting capacity according to demand,” Chief Executive Jozsef Varadi told Reuters. “It’s going to be a difficult quarter.”

“A loss of some 1.5 million seats in a week is staggering,” analyst John Grant said. With another 580,000 dropped in eastern Europe, “expectations for the next few months are grim”.

Recovery hopes have driven a share rebound for European airlines since the first vaccine breakthrough in November, before lockdown setbacks pared average gains to 30%, based on the Stoxx Europe airlines index.

More bullish investors may be getting ahead of themselves, some analysts caution.

“We see recovery risks into summer because (pre-flight) testing will in our view likely stifle demand,” he added in a note. “Slower-than-expected rollouts of vaccines to corporate populations will likely continue to strangle a business-demand recovery.”

The volatile outlook hugely complicates all-important summer schedule planning, as airlines must decide several months ahead whether to commit cash to bringing back and overhauling parked jets and rehire staff.

Wheel out too much capacity and the unfilled seats will deepen losses. An airline that underestimates demand, on the other hand, risks handing badly needed business to rivals.

Nearly three-quarters of European routes are now under restrictions, according to UBS research - a higher proportion than at the height of the pandemic’s first wave last March-May.

“What this does is it destroys all confidence in bookings,” he told the BBC on Friday.

Similar moves by Canada, Germany and Japan have drawn fire from the industry.

“These governments are not interested in managing a balanced approach to the risks,” IATA Director General Alexandre de Juniac said on Tuesday.

“The industry’s situation is still perilous - in fact it got worse over the year-end holiday period.”

Meanwhile, Norwegian Air, which challenged British Airways and other long-established rivals by launching transatlantic flights, said on Thursday it will end those services, causing 2,000 job losses, and seek government help.

The budget airline, founded in 1993, has been forced to ground all but six of its 138 aircraft due to the pandemic. “We have decided that long-haul is no longer in our business plan,” CEO Jacob Schram told an online news conference.