German exports down more than 12% last year due to coronavirus 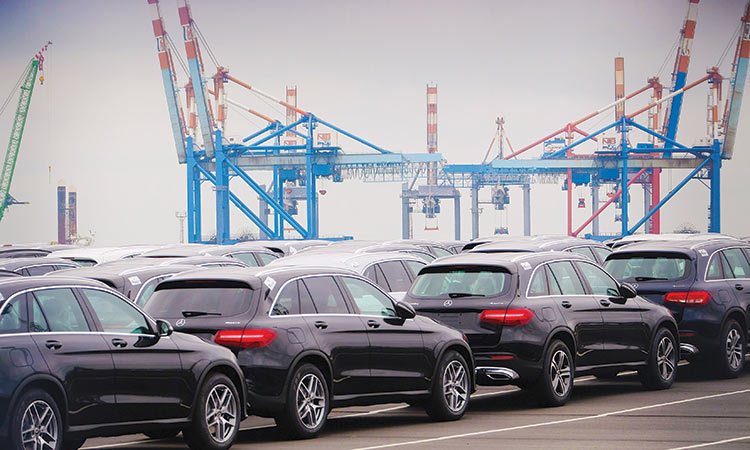 New cars for exports at a port in Bremerhaven, Germany. File/Agence France-Presse

German exports shrank more than 12% last year as demand from the United States and Britain collapsed due to the coronavirus pandemic while Asia remained the only bright spot for Europe’s largest economy, the BGA trade association said.

“The COVID-19 pandemic has pushed us back five years when it comes to trade - and at the same time it has catapulted us five years into the future in terms of digitalisation,” BGA President Anton Boerner said.

German exports to the United States, its largest foreign sales market outside the European Union, fell by 16% and exports to Britain tumbled by 18.5%.

“The only bright spots are China and Asia, their importance continued to increase during the pandemic,” Boerner said.

But it remained to be seen how a China-backed agreement among fifteen Asia-Pacific economies to form one of the world’s largest free trade blocs would change demand for European goods in coming years, Boerner cautioned.

China is likely to overtake France and the United States this year to become number one destination for German exports by value for the first time as German companies double down on the resurgent Asian giant.

Exports could grow by up to 13% next year, said Boerner, warning, however, that forecasts were tricky due to the unpredictable nature of coronavirus pandemic developments.

Boerner said it was unlikely that exports, an important driver of overall growth in Germany, would hit pre-crisis levels before 2022, adding, that could happen in the first or second quarter of that year.

Meanwhile, the Russia-led Nord Stream 2 consortium said it had completed laying pipes for the project in German waters, finishing work on a 2.6 kilometre-long portion of the pipeline, which had been stalled by the threat of US sanctions.

“We have completed this work,” the consortium said in an emailed statement, referring to the pipe-laying in the German economic zone.

The Fortuna earlier this month resumed work on the pipeline, which will pump gas directly from Russia to western Europe, bypassing Ukraine. Work had been suspended for a year because of the risks of sanctions from the United States.

The pipeline, which is estimated to cost 9.5 billion euros ($11.6 billion), will make western Europe more dependent on Russian gas and Washington says it will compromise European energy security.

It has become a flashpoint in relations between Russia and the West, which have sunk to post-Cold War lows. The Kremlin has called the sanctions “unfair competition”.

The Fortuna is meant to continue construction of the pipeline in Danish waters next month.

The consortium building the pipeline, led by Russian gas giant Gazprom with Western partners, has still to lay more than 100-km of pipeline, although more than 90% of the project has been completed.

Senior US administration officials said that Washington was urging European allies and private companies to halt work that could help build the pipeline and was preparing wider sanctions on the project in the coming weeks.

Russian Deputy Prime Minister Alexander Novak said that Russia will have to adjust to possible new US sanctions to complete the project.

The Kremlin has said that new US sanctions targeting Nord Stream 2 could complicate the pipeline’s completion, but that Moscow and European nations had an interest in its being built.

“We continue to do better and therefore meet the criteria to sit at the table when it comes to a possible consolidation of the European banks - and not just as a junior partner,” Sewing told Welt am Sonntag in an interview.

Sewing, who is pursuing a long-term drive to boost earnings power at Deutsche after years of underperformance, has consistently said that his priority was to complete a turnaround by 2022.

Talks on an all-German banking merger with Commerzbank failed in 2019 and, with a stock market value of just 18 billion euros ($21.9 billion), Deutsche would be an affordable target for a more richly valued potential acquirer.