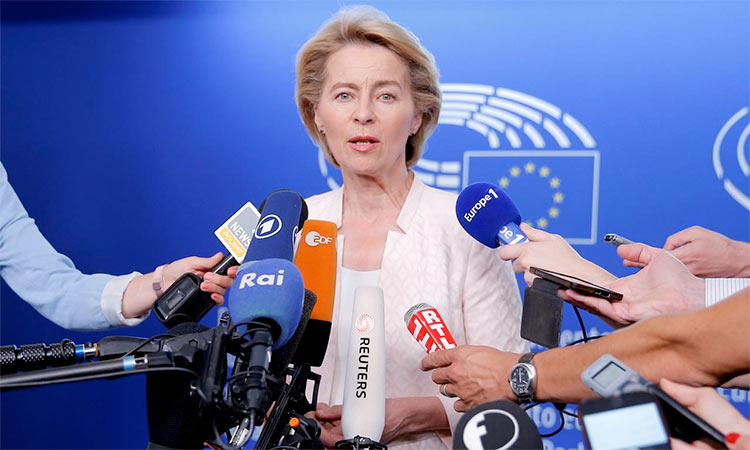 Brussels:  The president of the European Commission Ursula von der Leyen said on Friday there had been better progress in recent talks on a post-Brexit trade deal, but more work is needed.

Given the slow pace, talks were set to move to London next week, but a COVID-19 infection among the EU negotiating team has cast doubt on when face-to-face meetings will resume.

After eight months of negotiations, talks are already deep into extra time, with anything agreed needing debate and ratification by the European Parliament by the end of the year.

Britain left the EU on January 31, but a 11-month transition period to allow for both sides to agree on a basis for a new relationship ends on December 31.

Both UK and EU diplomats agreed that no swift end was sight in the negotiations with the Europeans urging British premier Boris Johnson to make a move.

“Our negotiating position remains the same ... to take back control of our money, laws and borders,” a UK government spokesman said.

Talks would continue remotely next week, and in person “when it’s judged safe to do so,” the spokesman added.

An EU diplomat in Brussels said the gap between the two sides is “only slowly shrinking” and was too wide to guarantee ratification of the deal by the end of year.

“Nevertheless, there is hope that the negotiations can be concluded quickly if and when the necessary political decisions are taken in London,” the diplomat added after member state envoys received an update on the talks.

In that meeting, according to another senior EU diplomat, the Netherlands and Belgium pressed the EU executive to urgently update contingency plans in case of a no-deal.

Those countries are just across the English Channel and, along with Ireland, would be on the front lines of any ensuing chaos if the sides fail to agree a new trade arrangement in time.

“This is not a political position on the negotiations, but a question of responsibility towards the sectors concerned, especially transport,” the diplomat added.

The same request was made by several leaders at an EU video summit on Thursday, but the commission, which is handling the negotiations, believed doing so would send the wrong message at a sensitive moment, a source said.

Without an agreement, tariffs would be levied on the huge volumes of trade passing between the UK and the European continent, through the Channel tunnel and by ship, starting on January 1.

Business groups expect not only massive traffic at the borders for suppliers, but also billions in additional costs and lost revenue.

Sterling edged higher against the euro on Friday after a European Union official said the bloc and Britain are very close to agreement in trade talks on most issues, even if they are still at odds over three main points.

Britain left the EU in January and is in talks with the bloc on a future trading relationship after a transition period ends on Dec. 31.

As time runs out for a deal, an EU official told ambassadors in Brussels that the EU and Britain were “both close” to reaching an agreement, but differences persist over fishing rights, guarantees of fair competition and ways to solve future disputes.

“For some weeks GBP has been supported by the view that some kind of deal will be announced this month. This is still the favoured outlook, though scope for any relief rally is set to be limited by the likelihood that any deal will be a skeleton one”, said Jane Foley, head of FX Strategy at Rabobank.

Foley said that not only Brexit, but also COVID-19 have created some volatility for the British currency as “chief EU negotiator Barnier finds himself in a position in which he needs to self-isolate”.

Chief Brexit negotiators suspended direct talks on Thursday after a member of the EU team tested positive for COVID-19, but officials continued working remotely to clinch an agreement that would come into force in just six weeks.