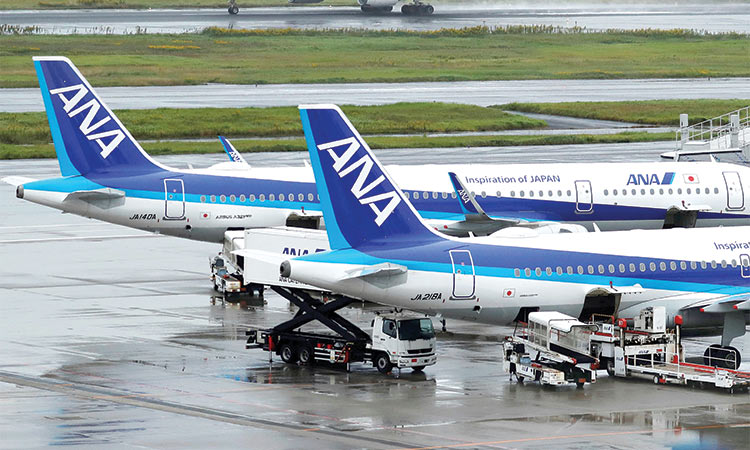 Planes of Japan Airlines and All Nippon Airways at an airport in Tokyo on Friday. Reuters

Japan’s government is in no mood for a huge bailout plan for ailing airline ANA, sources say, preferring a piecemeal approach to direct capital injections - a stark contrast to the bold moves other countries have made to protect flagship carriers.

Forecast to suffer a net loss of about $4.8 billion in the fiscal year to March, Japan’s largest airline is expected to announce a revival plan next week that will most likely include pay cuts and reduction in its fleet of aircraft.

The government hopes a waiver on airport landing fees, a tax-funded domestic tourism campaign and a gradual re-opening of borders will be enough to keep ANA alive, said government and ruling party officials with direct knowledge of the matter.

These measures will come on top of $3.8 billion in subordinated loans to ANA Holdings Inc from state-backed and private lenders.

The loans, cost cuts and capital accumulated during Japan’s inbound tourism boom in the past few years will allow ANA to weather the hit from COVID-19 at least for now, they said.

Though nothing has been officially decided, the government is ready to offer more relief if a deepening economic slump worsens the plight of big companies with national impact such as ANA. But ideas being floated among government and political circles centre on tax breaks for aircraft and fuel, as well as extensions of existing programmes such as the tourism campaign and subsidies to companies that retain jobs, the officials said.

More radical steps such as those taken by Germany, which did direct capital injection, are off the table for now, they said.

“Capital injection is a last resort,” said another ruling party official with close ties with the airline industry. “I don’t think the airlines themselves want this, because it would just show how dire their business health is.”

The Bank of Japan, too, is wary of stepping in, concerned that rescuing non-financial entities like ANA would fall into the realm of fiscal policy, said three people familiar with its thinking.

“The BOJ and government each has different roles to play,” one of the people said, ruling out measures such as directly offering subordinated loans to ANA.

There is uncertainty, however, on how long this drip-feed approach can last. Like other carriers, ANA has been burning through cash to maintain jets that are either grounded or flying with too few passengers during the coronavirus pandemic.

Most of ANA’s international routes are suspended and a resurgence of infections in Western countries means a revival of inbound tourism may be some time off.

If there is a huge wave of infections in Japan, that could also dash hopes of a rebound in domestic tourism. Once pent-up demand from the government’s campaign peters out, households may hold off on travelling as job losses and wage cuts hit income, analysts say.

Crunch time may come next year. Unless sales pick up, some companies may struggle to pay back loans, the officials said.

“Companies like ANA probably won’t run into cash problems this year. But things could turn ugly if they cannot emerge from the red next year,” said a government official.

That could force the government to take even more drastic steps.

“If conditions don’t improve by around next spring, airlines will be in a much dire state,” a third ruling party official said. “Nationalising ANA could become a real possibility.”

Meanwhile, Japanese shares ticked up on Friday after signs of progress in US stimulus talks helped Wall Street finish higher overnight, while some investors refrained from making big bets ahead of a string of earnings reports next week.

The Japanese market showed little reaction to the final US presidential debate ahead of the November election.

Mitsubishi Heavy Industries climbed more than 6.5% after Reuters reported it would freeze the development of its SpaceJet regional jet.