Spain proposes new taxes in its budget to collect $7.96 billion 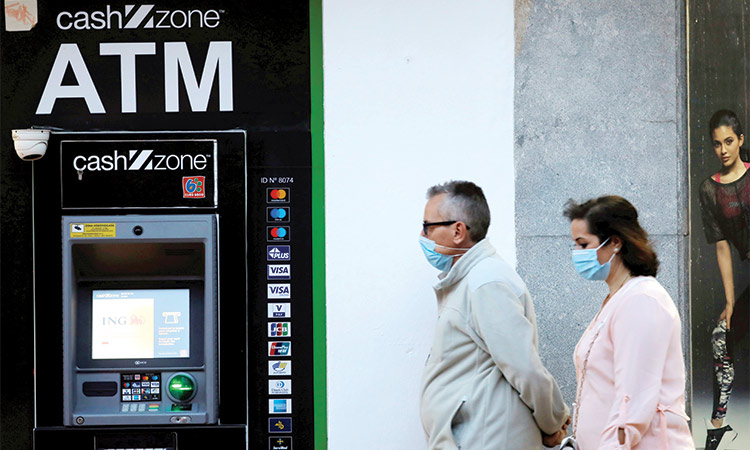 People walk past an ATM of a bank in Ronda, Spain. File/Reuters

Spain’s government is proposing new taxes on digital services, financial transactions and plastic packaging in 2021 and a higher levy on sugary beverages in the hope of raising a total of 6.8 billion euros ($7.96 billion), its draft budget showed.

Spain sent the budget plan, which projects a deficit of 7.7% and an economic rebound of at least 7.2% as previously announced, to the European Commission.

This year, the government expects a recession of 11.2% - the worst since the civil war - and a budget gap of 11.3% due to the impact of the coronavirus pandemic.

Parliament has already given its green light to the implementation of the two more controversial taxes. The so-called Google tax on revenues booked locally by large tech firms such as Google, Amazon and Facebook is being adopted across Europe. Washington sees such a tax as a threat to US companies.

The 3% tax on digital services, such as advertising and data sales, is projected to collect around 1 billion euros in 2021.

The financial transactions tax, known as ‘Tobin tax’, is another European project, led by the German government, and is expected to raise 850 million euros next year in Spain. A 0.2% rate would be applied to transactions of shares of listed companies with a market cap higher than 1 billion euros.

In the context of shrinking tax revenues and record public spending to counter the impact of the pandemic, Spain also plans to create or raise other taxes for potentially harmful products.

It will hike value-added tax on sweetened beverages to 21% from 10%, expecting to collect 340 million euros in 2021, and to raise 1.8 billion euros from various ‘green’ taxes, such as a tax on plastic packaging.

The Socialist-led minority coalition government hopes parliament will approve the first full-year budget since 2016 after a long period of political instability. Spain had to roll over its budgets for most of the past four years, all but preventing public investment.

The Spanish government would issue debt to compensate for any delay in the approval and disbursement of EU rescue funds, which represents a risk for the economic recovery, Economy Minister Nadia Calvino said. Spain is counting on the funds to offer a recovery plan as early as January 2021. It foresees massive investment to help it out of a steep recession brought on by the coronavirus pandemic, Calvino said earlier this week.

The government would sell debt to finance the plan if the funds are delayed, Calvino told reporters in a conference call on Thursday.

“The priority is to meet the investment needs,” she said.

Spain is due to receive around 140 billion euros ($164.29 billion) out of the EU’s 750 billion-euro coronavirus recovery package in the next few years. A little more than half that will come as grants, the rest as debt.

As part of the process to make the EU aid pledge effective, Spain will send to Brussels on Thursday a draft budget for 2021. It projects a rebound of 7.2% after the sharpest economic contraction since the civil war, 11.2% this year, which was recently revised from a previous forecast of 9.2%.

But growth could go to as much as 9.8% next year if the EU aid starts coming through as planned, the government said.

Calvino also said the government is working on creating new tools to help small and medium-size companies stay solvent despite the coronavirus crisis. Recent data showed those companies, which benefited from cheap government loans, will face solvency issues, because the cheap loans are starting to come due and the economy is still running in slow motion.

Bank of Spain Governor Pablo Hernandez de Cos said earlier this week the government should consider the possibility of direct assistance or temporary capital injections into indebted firms.

Meanwhile, Spain’s government passed a decree on Tuesday to tighten rules on sex discrimination in pay, requiring companies to disclose the gender breakdown of staff wages, and setting up a framework to determine whether different jobs have the same value.

“The message is very clear: women must be paid the same as men for doing the same jobs,” Equality Minister Irene Montero told a news conference after the weekly cabinet meeting.

Montero said the government had to be proactive to prevent the coronavirus pandemic from worsening the gender pay gap.

“In this emergency situation we know that there will be no economic recovery if we don’t end the pay gap once and for all,” she said.

The government will update its GDP forecast for this year in early October and is likely to update its budget deficit target too to a wider deficit than the 10.3% of GDP target announced in May