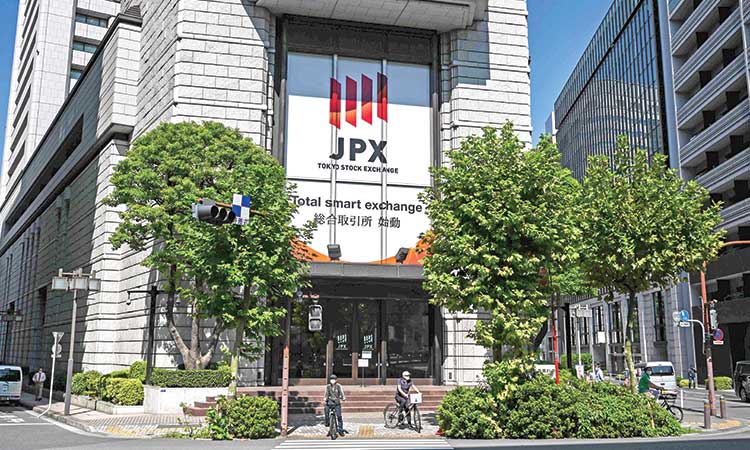 Cyclists in front of the Tokyo Stock Exchange in Japan on Friday. Agence France-Presse

The Tokyo Stock Exchange (TSE) closed out a volatile session capped by news of US President Donald Trump testing positive for the new coronavirus on Friday, a day after its worst-ever outage paralysed the world’s third-largest equity market.

Tokyo’s bourse resumed trading on Friday after a full-day outage due to a malfunction in its computer systems on Thursday . The market had opened on a positive note, with traders expressing relief that the shutdown was hardware-related rather than a cyber attack. But news of Trump’s test reversed the market’s course, sending traders scrambling to react.

“I feel like my head is about to explode,” said Takeo Kamai, head of execution services at CLSA Japan. “When I heard the news (about Trump), I thought, ‘Give me a break,’ as I executed my trades.”

He said the Tokyo Stock Exchange was fortunate that trading had resumed on a day like this.

“There’s no doubt there would have been complaints from left, right and centre if (the outage) had happened today,” he said.

Trade volume reached 2.86 trillion yen ($27.21 billion) on Friday, about 20% above the average daily turnover. Thursday’s outage was the result of a hardware problem at the bourse’s “Arrowhead” trading system, and subsequent failure to switch to a back-up. It caused the first full-day suspension since the exchange moved to all-electronic trading in 1999.

It had come on a day of high anticipated trade volume following the release of the Bank of Japan’s closely watched tankan corporate survey and a rise on Wall Street.

The meltdown also occurred just two weeks into new Prime Minister Yoshihide Suga’s term - for which he has prioritised digitalisation - and dented Tokyo’s hopes of replacing Hong Kong as an Asian financial hub.

“It’s problematic that this happened after the TSE upgraded its system as recently as 2019,” said Takatoshi Itoshima, strategist at Pictet Asset Management. “IoT (Internet of Things) related shares are meant to be the leader of ‘Suganomics’ trade but this won’t impress foreign investors.” Officials from the Tokyo Stock Exchange and Japan Exchange Group, which runs the bourse, as well as system developer Fujitsu , apologised for the debacle on Thursday.

Arrowhead, developed by Fujitsu, debuted in 2010, bringing processing times for trades to 5 milliseconds - on a par with the New York and London stock exchanges at the time. The system got an overhaul last November, and currently processes orders in about 0.2 milliseconds.

TSE said a disc device failure had caused abnormalities in the distribution of market information and monitoring functions, although the fundamental cause of the problem was still unknown. It declined to comment on possible compensation issues, while industry sources said brokerages’ contracts with the bourse generally shield the exchange from compensation claims associated with trade suspensions, and that no such claims were made after previous shutdowns.