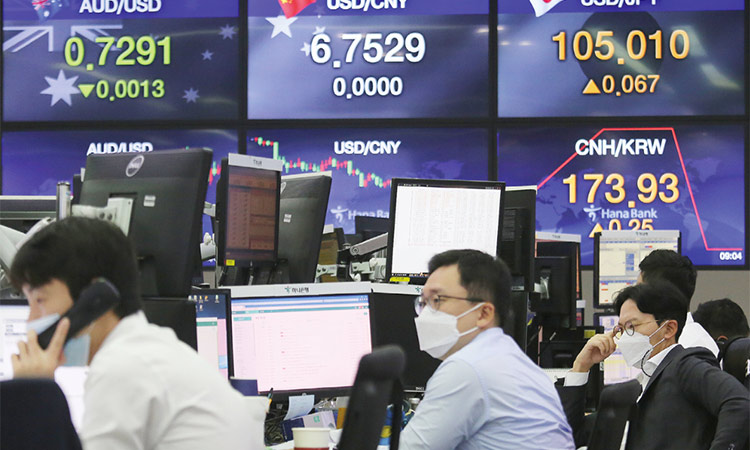 US Treasury yields dropped and the yield curve flattened as investors expressed disappointment that after its policy-setting meeting on Wednesday the Fed did not unveil more measures to stimulate the economy.

Wall Street’s main indexes tumbled as the technology sector and related stocks slid further, with Apple Inc and Amazon.com Inc among the biggest drags on the Nasdaq.

The number of Americans filing new claims for unemployment benefits fell less than expected last week and applications for the prior period were revised up, suggesting the labour market recovery had shifted into low gear amid fading fiscal stimulus.

The weekly jobless claims report from the Labor Department on Thursday, the most timely data on the economy’s health, also showed nearly 30 million people were on unemployment benefits at the end of August, laying bare both the continuing economic and human devastation six months after the COVID-19 pandemic started in the United States.

The Federal Reserve on Wednesday vowed to keep interest rates near zero for a long time, noting that the coronavirus “will continue to weigh on economic activity” in the near term and “poses considerable risks to the economic outlook over the medium term.” Fed Chair Jerome Powell said more fiscal support was likely to be needed for the economy.

Initial claims for state unemployment benefits fell 33,000 to a seasonally adjusted 860,000 for the week ended Sept. 12. Data for the prior week was revised to show 9,000 more applications received than previously reported.

Economists polled by Reuters had forecast 850,000 applications in the latest week.

Unadjusted claims dropped 75,974 to 790,021 last week. Economists prefer the unadjusted claims number given earlier difficulties adjusting the claims data for seasonal fluctuations because of the economic shock caused by the coronavirus crisis.

A total 658,737 applications were received for the government-funded pandemic unemployment assistance last week.

The Fed is doing all it can without appearing to be in panic mode, said Rick Meckler, a partner at Cherry Lane Investments, a family investment office in New Vernon, New Jersey.

Investors face few alternatives other than stocks so some are taking profits ahead of the US presidential election in November from this year’s unexpected gains after the impact of the coronavirus pandemic, he said.

“If there’s more stimulation to come it’s going to have to come from Congress and the president, and on that front we seem probably stymied until the election.”

Traders were also taking in Bank of Japan and Bank of England meetings and plenty of emerging market action, but the tone was set by the events overnight at the Fed and in the trenches of the tech war.

The dollar rebounded for its best daily gain in more than a week against a basket of other top currencies and the euro dipped back under $1.18.

In Europe, banks, automakers and miners were the biggest sector decliners. Volkswagen, Renault and PSA Group fell between 2.5% and 3% after industry data showed European car sales fell by 17.6% in August.

The stronger dollar inflicted some damage in emerging markets too. Turkey’s battered lira hit its latest record low, Argentina announced new capital controls just weeks after its ninth debt restructuring, and there was a third straight day of falls for eastern European currencies.

Overnight in Asia, MSCI’s broadest index of Asia-Pacific shares outside Japan lost 1% after five straight days of gains while the Nikkei in Japan and KOPSI in South Korea shed 0.6%. and 1.2%, respectively.

News the Bank of England had done more work on a possible shift to negative interest rates dunked sterling back under $1.29 again after it lost 3.5% this month following a fresh bout of Brexit chaos. The Australian dollar lost as much as 0.4% to $0.7278, having erased earlier gains made after stronger-than-expected local jobs data.

The yen hit a 1-1/2-month high of 104.62 to the dollar after the Bank of Japan made no changes to its rates or stimulus.