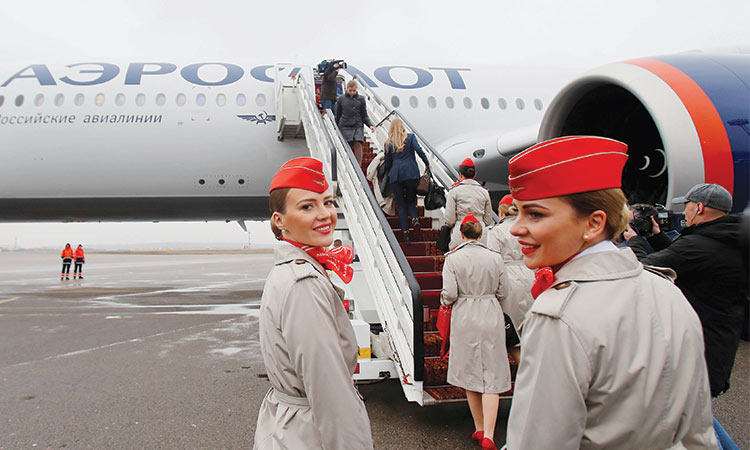 Flight attendants and passengers enter an aircraft of Aeroflot in Moscow. File/Reuters

Aeroflot slumped to a 36 billion rouble ($481 million) loss in the second quarter after flights nearly ground to a halt amid the coronavirus pandemic. The state has approved an issue of up to 1.7 billion new shares.

The new share issue would more than double Aeroflot’s total shares outstanding and would represent 60% of its enlarged capital if issued in full. The price is yet to be set by the company.

The state plans to buy part of the new share issue as it aims to retain no less than its existing 51.2% stake in Aeroflot, with Russian Direct Investment Fund (RDIF) and VTB also taking part, sources have told Reuters.

Aeroflot now wants to open up the deal to private investors, too, the sources said, as the state wants to raise as much cash for its top carrier as possible.

State lender VTB is among banks arranging the deal, they said. The offering is expected as soon as in October after all paperwork is finished, two of the sources added.

It was not immediately clear how much Aeroflot may raise in total. The previous plan was put by the sources at 80 billion roubles ($1 billion). Aeroflot declined to comment.

Sovcomflot, which is raising money to spend on new projects and reduce debt aims to list in early October, two sources familiar with the plans told Reuters. Bankers said there was strong Russian interest, some of which could act as anchor investors.

The company provided no valuation guidance, but a banker involved in the deal pointed out its peers trade at 7-12 times their expected core earnings (EBITDA).

Another banker involved in the deal said a $7-10 billion valuation range sounded “reasonable” and the managers had sufficient feedback to go through with the deal.

Sovcomflot, which specialises in petroleum and LNG shipping, pointed to strong financials, including an adjusted EBITDA margin of over 70% for the first six months of 2020 and plans to pay at least 50% of its 2020 net profit as dividends, targeted at $225 million, in an effort to woo investors.

“SCF’s strategy remains focused on maintaining our ‘preferred carrier’ status with the major oil and gas companies by renewing and expanding our fleet, with a particular focus on the industrial projects that have historically provided long term predictable cash flows and profitable returns on invested capital,” CEO Igor Tonkovidov said in a statement.

Global IPO markets have livened up this month although Europe has lagged behind the United States where at least a dozen firms intend to go public in the next few days, the most since 2014.

Bankers said markets were accustomed to “political noise” which was part of Russian country risk. One Russian fund manager, however, described the Navalny case as a potential “black swan” for the listing.

The Russian government, which will remain Sovcomflot’s major shareholder after the IPO, has considered listing the company for years as part of its broader privatisation plans.

Obstacles ranging from weak markets to international sanctions placed on Russia over its role in the Ukraine crisis previously prevented such a move.

Meanwhile, Russia’s central bank (CB) is likely to keep its main interest rate on hold on Friday following a slide in the rouble on concern over geopolitical developments, a Reuters poll showed on Monday.

Twenty-five analysts and economists in a Reuters poll of 30 experts said they believed the central bank would keep its key rate at 4.25%.