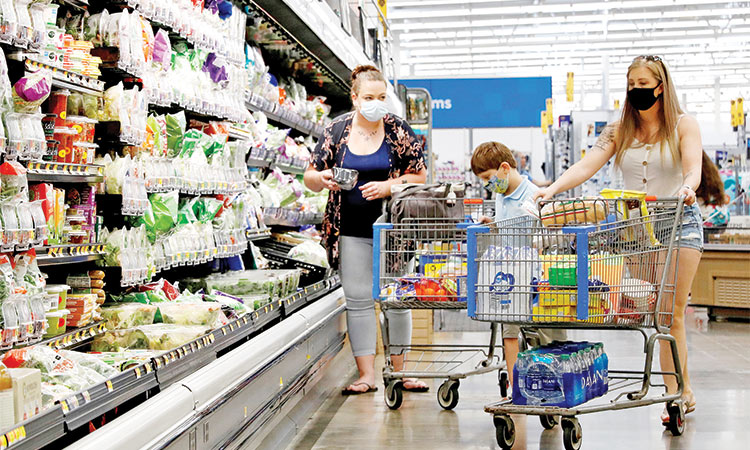 Shoppers in masks at a Walmart store in Bradford, Pennsylvania. The US consumer spending slowed down in August. File/Reuters

The global recession this year will not be as deep as expected as a result of countries’ efforts to counter the economic fallout from the coronavirus pandemic, the OECD said on Wednesday.

But the recovery next year will also be more modest than anticipated, the Organisation for Economic Co-operation and Development said, projecting a contraction of 4.5 per cent in global economic output this year and a return to growth of roughly 5.0 per cent in 2021.

In its previous set of forecasts in June, the Paris-based OECD had been expecting the global economy to shrink by 6.0 per cent in 2020 and return to growth of 5.2 per cent next year.

“After the initial bounce-back in many activities following the easing of confinement measures, there are some signs from high-frequency indicators and business surveys that the pace of the global recovery has lost momentum since June, particularly in many advanced economies,” the OECD said.

It pointed out, however, that “the economic outlook remains exceptionally uncertain, with the Covid-19 pandemic continuing to exert a substantial toll on economies and societies”.

In the second quarter of 2020, global output more than 10 per cent lower than at the end of 2019, “an unprecedented sudden shock in modern times”, the OECD said.

The extent and timing of the pandemic shock differed across the major economies, but all experienced a sharp contraction in activity as necessary containment measures were implemented.

Global trade collapsed, declining by over 15 per cent in the first half of 2020, and labour markets were severely disrupted by reductions in working hours, job losses and the enforced shutdown of businesses.

“Without the prompt and effective policy support introduced in all economies to cushion the impact of the shock on household incomes and companies, the contraction in output and employment would have been substantially larger,” it said.

Looking at individual economies, China was expected to be the only one to expand in 2020, with projected growth of 1.8 per cent.

India, on the other hand, would see its economy shrink by 10.2 per cent.

The United States, the world’s biggest economy, would fare better than the global average, with a projected contraction of 3.8 per cent this year.

Germany would perform better than the eurozone as a whole, with its economy set to shrink by 5.4 per cent, compared with a contraction of 7.9 per cent for the single currency area.

Future growth prospects would depend on factors including the severity of new virus outbreaks, the type of restrictions imposed, vaccine deployment and the effects of fiscal and monetary policy actions on demand, the OECD said.

In her first annual State of the European Union address, the president of the European Commission also warned Britain not to breach its Brexit withdrawal treaty and Turkey not to threaten its neighbours.

Europe’s own economy has been devastated by the epidemic and the ensuing economic and social lockdowns, but von der Leyen touted her Commission’s green recovery plan as a way back.

She said that Brussels would urge member states to set a more ambitious goal of cutting greenhouse emissions by 55 per cent by 2030, up from a target of 40 per cent.

“For us, the 2030 target is ambitious, achievable, and beneficial for Europe,” she added.

The new target is backed by EU powers France and Germany, as well as big business, but faces stern resistance from eastern member states that depend on coal for their energy needs.

“We’re concerned about the European Commission’s proposal to increase the emission reduction target by 2030 to ‘at least 55 percent’ without presenting measures to implement it,” the Polish climate ministry said.

Warsaw recently earmarked billions for its first nuclear power plants. Slated to go online by 2033, they are meant to ease the transition away from coal, but Poland is keen to secure transition funding from Brussels.

EU leaders will attempt to agree on the target at a summit in October, which would then need the approval of European Parliament, where a majority of MEPs want a still more ambitious target.

Von der Leyen said that 30 per cent of spending from the 750-billion-euro ($890-billion) plan would be devoted to climate-friendly projects and financed through so-called green bonds.

In a broadside aimed at Poland’s populist government, von der Leyen also declared that so-called LGBT-free zones have “no place in our union.”

“I will not rest when it comes to building a union of equality... a union where you can be who you are and love who you want — without fear of recrimination or discrimination,” she said.