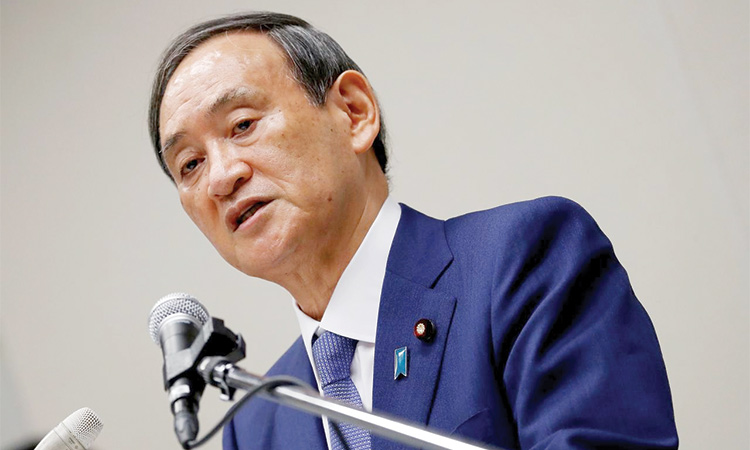 Yoshihide Suga speaks during a news conference in Tokyo. File/Reuters

Japan’s Chief Cabinet Secretary Yoshihide Suga, a frontrunner to be the next prime minister, said he would like the central bank to continue its ultra-loose monetary policy as the economy is still struggling with the impact of the coronavirus pandemic.

In an interview that ran on Saturday in the Nikkei newspaper, Suga also said he would consider compiling another economic stimulus package by the end of this year to “put the pandemic to an end and shift the economy to a new stage.”

“I want to carry over (the bold easing steps),” he was quoted as saying by the paper.

The remarks reinforce expectations that Suga will continue with many of Abe’s pro-growth economic policies as the pandemic adds to the pain of an economy already in deep recession.

He also expressed hope of creating a new government agency to promote digitalisation of government services and various industries such as healthcare, as delays on this front have slowed payouts to companies and households hit by COVID-19.

“I know there could be resistance, but we should move forward on this,” Suga said of his plan to allow clinics to permanently offer medical treatment online.

Japan currently allows online treatment only as a temporary step to accommodate patients having difficulty visiting hospitals due to COVID-19.

Yoshihide Suga said the new prime minister must continue to protect companies and jobs, mainly through pay-outs and loans, to cushion the economic blow from the coronavirus pandemic.

Suga repeated his caution over the idea, floated by some lawmakers, to cut the sales tax from the current 10% to mitigate households’ pain from the pandemic.

“The sales tax is a necessary source of revenue to pay for Japan’s social welfare ... I think the rate should be kept as it is,” Suga told a television programme.

The pandemic has deepened recession in Japan, triggering the worst postwar economic slump in the second quarter as collapsing global and domestic demand hurt exports and corporate profits.

“What’s important now is to protect jobs and help companies continue with their businesses, mainly through pay-outs and loans,” Suga said.

“What people want most from the government is to deal with the pandemic and create a safe environment to live,” Suga said, when asked whether he would call an early snap election if he becomes Japan’s new leader. Suga is widely expected to win the Liberal Democratic Party’s (LDP) leadership election on Sept. 14, set after Abe’s decision to step down. The winner is virtually assured of becoming premier due to the LDP’s parliamentary majority.

Markets have been rife with speculation that Suga, upon becoming prime minister, may call a snap election in coming months to solidify his political grip.

“What people want most from the government is to deal with the pandemic and create a safe environment to live,” Suga told a television programme, when asked whether he would call an early snap election if he becomes Japan’s new leader.

Softbank Group: Softbank Group is taking a direct role in managing its virus-hit hospitality startup Oyo’s operations in Latin America through a joint venture which will control all hotels in the region, the head of Oyo Brazil told Reuters in an interview on Friday.

Softbank, the biggest investor in Oyo, will use part of its $5 billion Latin America fund to invest in the newly formed company called Oyo Latam which will take over 1,000 hotels mainly in Brazil and Mexico, Henrique Weaver said.

Weaver said both companies would have equal representation on the board, but did not say how much Softbank would invest.

The move comes as Oyo, valued at $10 billion in its most recent fundraising round, has been forced to cut costs and rein in its expansionist strategy in global markets by reducing its hotel footprint and laying off employees after revenues took a hit from the coronavirus pandemic.

It shows the Japanese investor’s keenness to ensure the Indian company remains on track, and is the latest sign SoftBank is more closely overseeing Oyo’s operations in markets including China, India and Japan, three sources familiar with the matter told Reuters.

Softbank has taken a big writedowns on bets including shared office space company WeWork and wants to avoid a similar fate with Oyo, in which it has invested over $1 billion, said one of the sources who is directly familiar with Softbank’s thinking.

An Oyo spokeswoman said Softbank is like any other investor in the company with a seat on the board and that Oyo is “a management-run and a board-governed company.”

“Any description that Oyo is being managed, or there is any ‘additional oversight’ (formal or informal) or otherwise is merely media speculation and completely untrue,” the spokeswoman said.