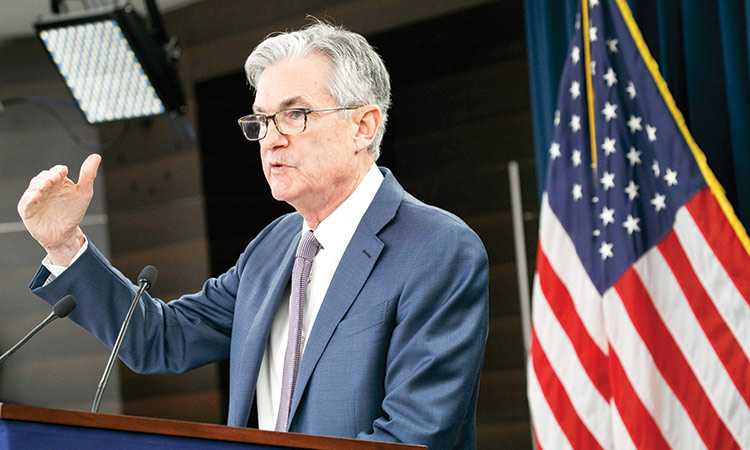 Jerome Powell speaks during a news conference in Washington. Powell said on Thursday that the underlying US economy remains solid, but high unemployment could persist for years. File/Associated Press

Federal Reserve Chair Jerome Powell said the aim is to correct the “shortfalls” in achieving the Fed’s goal of maximum employment and to recognize that, with changes in the global economy, a tight job market does not necessarily drive prices higher.

In practice, the change will keep borrowing rates low for much longer than in prior economic expansions -- something President Donald Trump has loudly demanded, though for more political reasons.

“This change reflects our appreciation for the benefits of a strong labour market, particularly for many in low- and moderate-income communities,” Powell said in a speech unveiling the policy.

The new policy makes it clear the central bank will allow inflation to stay above its 2.0 per cent target “for some time” before officials will need to take action by raising interest rates.

The policy shift, though telegraphed in recent statements, is a significant change for the Fed and central banking in general, as inflation for decades has been the economic villain to be stamped out at every turn. It also represented a defeat for inflation hawks, though the change was approved unanimously.

Powell, in his speech to the annual Jackson Hole monetary policy conference, said the past 10 years since the 2008 global financial crisis has shown that warnings about low unemployment causing price hikes were exaggerated.

“This change may appear subtle, but it reflects our view that a robust job market can be sustained without causing an outbreak of inflation,” he told the virtual conference.

Prior to the coronavirus pandemic, the US unemployment rate had hovered near 50-year lows at 3.5 per cent, which brought many people back into the workforce as firms struggled to fill open positions.

Inflation for years has stayed below the 2.0 per cent target, and Powell said the goal now is “to achieve inflation that averages two per cent over time,” although he stressed that would not be tied “to a particular mathematical formula.” Advocates of the new regime have argued the central bank needed to let the inflation rate drift higher to average 2.0 per cent over the long run.

The Fed chief grew passionate as he described the impact of hearing from low-income workers about the dramatic change the higher employment rate had on their communities in recent years.

Going forward, “In conducting monetary policy, we will remain highly focused on fostering as strong a labour market as possible for the benefit of all Americans,” he said.

In addition, he pledged the Fed will use “our full range of tools to support the economy.” Responding to questions after the video speech, Powell sounded a note of optimism about the recovery from the pandemic, as well as a note of caution.

The pandemic hit a solid economy like a natural disaster, he said, noting that “there’s is still a healthy economy under here, except for this area that’s been directly affected by COVID.” But millions of workers in travel, hotels and restaurants have been directly impacted, which means “a couple of years of... relatively high unemployment.” People in those industries are “really going to struggle to find work... We need to support them.”

As he has repeatedly stated, this will “take support from Congress” with programs focused on education, training and healthcare -- though lawmakers are currently deadlocked on the passage of another round of legislation to aid the economy.

“It’s about all the things that enable people to get into the labour force and stay there and progress in their careers,” Powell said.

Global Stocks: A gauge of world equity markets climbed while the dollar and gold prices eased on Thursday after the Federal Reserve said it would roll out an aggressive new strategy. The dollar index rose 0.27%, spot gold prices fell 0.6% to $1,941.67 an ounce. MSCI’s benchmark for global equity markets rose 0.19% to 585.13, while Europe’s broad FTSEurofirst 300 index dropped 0.04% to 1,445.92.

The S&P 500 and the Nasdaq rose to record highs on Thursday as the Federal Reserve sought to achieve inflation averaging 2% over time in an attempt to lift the US economy out of a deep pandemic-driven recession.

The S&P 500 and the Nasdaq have recovered their coronavirus-driven losses, largely driven by a tech-related rally at a time when the US economy is struggling with its worst downturn since the Great Depression. Data on Thursday showed weekly jobless claims hovered around 1 million last week, suggesting the labour market recovery was stalling.