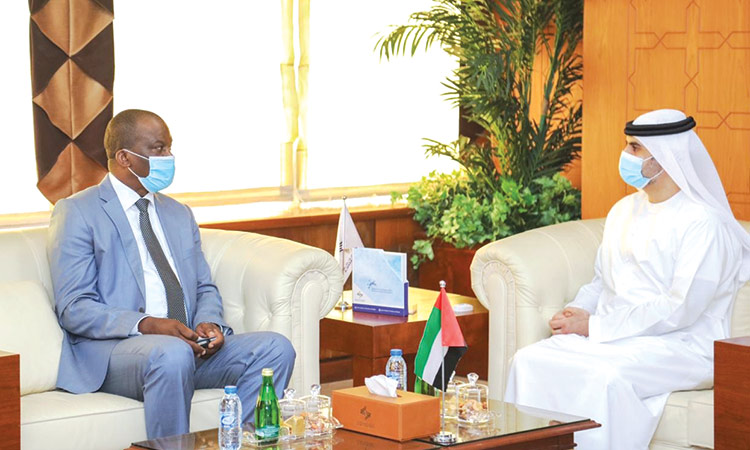 Business Bureau, Gulf Today
The Ajman Chamber of Commerce and Industry (ACCI) received a delegation from the consulate of South Africa in Dubai to discuss ways of enhancing the economic cooperation, opening new skylines of investment between the two sides, and highlighting the investment opportunities in a way that increases the volume of intra-trade.

The delegation that comprised Mogobo David Magabe, Consul General of the Republic of South Africa in Dubai and the Northern Emirates, and Mpho Mminele, Consul for Political Affairs, was received by Salem Al Suwaidi, Director General of the Ajman Chamber. Among the attendees were Mohammad Ali Al Janahi - Executive Director of Promotion and Investment Division, Marwan Hareb Al-Aryani, Director of Promotion and International Relations Department, and Sheikh Abdulaziz bin Hamdan Al Nuaimi-Department of Economic Development in Ajman.

During the meeting, Salem Al Suwaidi stressed the importance of the visit and its role in promoting the cooperation between Ajman and South Africa and opening channels of cooperation and partnership between merchants and businessmen of the both. He also affirmed the diversity of components and investment opportunities available in the two parties.

The visiting delegation was also briefed on the major sectors and investment chances in the emirate of Ajman and the efforts of government entities to provide a stimulating business environment that keeps pace with the aspirations of investors and businessmen. Moreover, the opportunities available in Al Zora in the entertainment, tourist and real estate sectors, and other fields were highlighted.

Salem Al Suwaidi stressed that the Chamber’s endeavors to enhance its external cooperation with all countries, with the aim of opening new markets and activating direct communication channels between businessmen in Ajman and other countries.

He further pointed to the intensification of communication and cooperation with the African countries to make use of the promising investment opportunities that feed into serving of all parties.

“Statistics indicate that the volume of trade between the UAE and South Africa amounted to Dhs14 billion during 2019, while the trade size between Ajman and South Africa confirms the possibility of increasing cooperation in the future in all sectors,” Al Suwaidi said.

He further stressed the importance of continuing the communication between the two parties to hold joint meetings and events through visual communication channels in the presence of businessmen and investors in Ajman and South Africa.

For his part, Mogobo David Magabe, Consul General of the Republic of South Africa, thanked the Ajman Chamber for the warm reception, stressing his country’s keenness to beef-up the cooperation with the UAE and benefit from the investment capabilities of the two countries.

He further briefed the attendees on the important opportunities available in South Africa in various sectors such as agriculture, mining, industry, infrastructure and others.

At the end of the meeting, Salem Al Suwaidi and Mogobo David Magabe exchanged gifts and memorial shields, stressing the importance of building future partnerships that would help increase economic growth between the two parties.