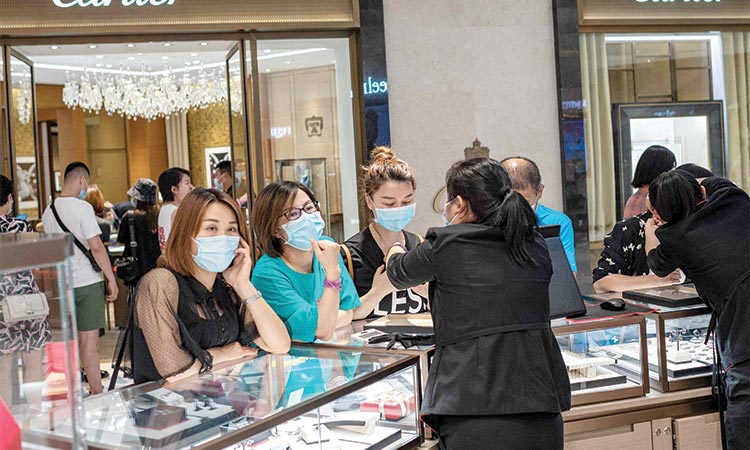 Buyers look at jewellery in a mall in Beijing on Friday. Agence France-Presse

European shares were also dragged lower by a hit to travel stocks after Britain added more European countries to its quarantine list, including neighbouring France.

The pan-European STOXX 600 was down 1.2%, although still on track to gain for a second straight week.

MSCI’s world index was 0.3% lower, drifting further from all-time highs touched in February. The index has still rallied close to 50% from March’s trough in the wake of the COVID-19 pandemic.

The eurozone reported the biggest drop it had ever recorded in employment in the second quarter. Data also confirmed a record drop in gross domestic product last quarter and a widening in the eurozone’s trade surplus with the rest of the world.

Wall Street was muted on Friday, with the S&P 500 slipping from near record highs, as a slowdown in domestic retail sales growth added to worries about a wobbly post-pandemic economic recovery in the absence of a new US fiscal stimulus bill.

Technology, which has been the best performing sector through the pandemic, led declines among the 11 major S&P indexes, while financials and industrials outperformed. Data on Friday showed US retail sales increased less than expected last month and could slow further due to spiraling COVID-19 cases and a reduction in unemployment benefit checks.

Data showing a slower-than-expected rise in Chinese industrial production and a surprise fall in retail sales put Asian shares on the defensive.

Chinese shares rose 1.5% in choppy trade, with the data suggesting domestic demand is still struggling after the coronavirus outbreak.

The benchmark German 10-year Bund yield fell to -0.42% after rising for three sessions and having touched a six-week peak in early trade.

Yields on US Treasuries remained elevated after an auction of 30-year bonds on Thursday met weak demand.

Gold fell on Friday, on track to post its worst week since March, as an uptick in US Treasury yields and a logjam over a US stimulus bill to help the coronavirus-hit economy dented the metal’s allure.  Spot Gold dipped 0.3% to $1,946.56 per ounce by 10:53am and US Gold futures fell 0.8% to $1,953.80. After hitting a record peak of $2,072.50 on Aug. 7 and rising over the previous nine weeks, bullion declined 4.3% this week. “The Gold market had been in a parabolic state, so when you throw a little pickup in yields along with the impasse on the stimulus bill, it was going to see a bit of a retracement,” said David Meger, director of metals trading at High Ridge Futures. “We might have gone a little too far, too fast, and we believe the market is in need of a pause, a consolidation. And that’s exactly what we are seeing.”

The benchmark US 10-year Treasury yield hovered near seven-week highs, while hopes for a fresh round of US coronavirus relief faded as Congress went into recess. Higher yields increase the opportunity cost of holding non-yielding assets such as bullion, which has climbed over 28% so far this year.

“We’re going to hit the all-time highs again on the likelihood of a substantial stimulus package and the possibility of chaos around the election is going to drive people into a flight to safety,” said Jeffrey Sica, founder of Circle Squared Alternative Investments. Among other metals, silver shed 2.6% to $26.83 per ounce, set to snap a 9-week winning streak, down 5.2% so far. Platinum fell 0.2% to $955.32 and palladium eased 0.2% at $2,162.39.

The dollar index was headed for an eighth consecutive week of losses, its longest weekly losing streak in a decade.

Oil edged further below $45 a barrel, giving up some of this week’s gain, under pressure from doubts about demand recovery due to the COVID-19 pandemic and rising supply.

Most major currencies in Latin America declined on Friday after disappointing economic data from China, while Mexico’s peso continued its advance for the fourth straight session on signs that the pace of further monetary policy easing could slow. Risk appetite dwindled among investors following the data as China remains one of Latin America’s biggest export destinations for agricultural products and metals.  Brazil’s real slipped 0.5% against the dollar. A central bank indicator showed economic activity in Brazil expanded at a record pace in June, ending a torrid quarter on a more positive footing as the easing of social isolation and lockdown measures allowed businesses to open up and activity to recover.