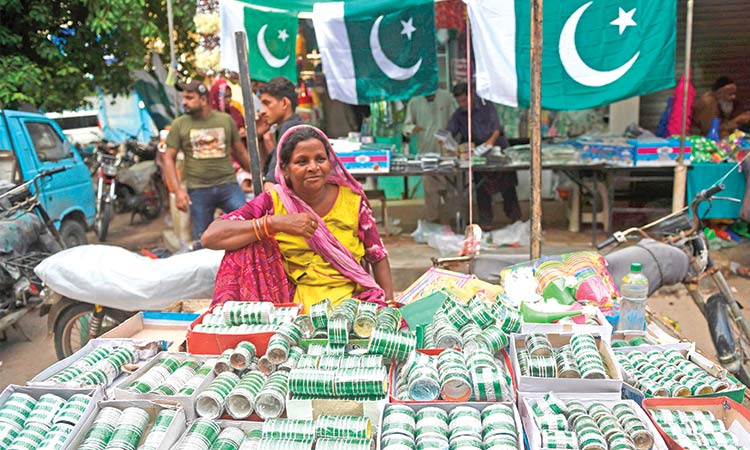 A woman sells bangles with the colours of Pakistan’s national flag in Karachi on Sunday. Agence France-Presse

Minister for Planning and Development Asad Umar said that Moody’s reconfirmation of Pakistan’s credit rating with a stable outlook reflected that Pakistan’s economy was witnessing a ‘V’ shaped recovery amid COVID-19 pandemic.

In the middle of a global pandemic it was a testimony to the ‘V’ shaped recovery, Pakistan had seen, Umar said in his tweet.

He said the economic recovery could become possible due to prime minister Imran Khan’s balanced approach to safeguarding national health and livelihoods, delivering success on both counts.

Meanwhile the State Bank of Pakistan (SBP) has enhanced the limits for housing finance and microenterprise loans up to Rs3 million from the existing limit of Rs1 million for borrowings from the microfinance banks.

Further, to commensurate with enhanced loan sizes, annual income eligibility for general loans and housing loans has been increased up to Rs1.2 million and Rs1.5 million, respectively. Moreover, the limit for lending against gold collateral to meet borrowers’ immediate domestic or emergency needs has also been enhanced.

The decision to increase the limit of housing finance loans has been made in view of the fact that the existing loan limit was insufficient to promote low cost housing finance through MFBs.

Similarly, limits for lending to micro enterprises needed to be enhanced considering the large unmet demand from Micro and Small Enterprise (MSEs). These initiatives would further support the micro borrowers and enterprises and an early revival of economic activities in the current challenging times.

However, in order to ensure sustainability, the enhanced loans sizes for housing and microenterprises would be allowed to those MFBs which are on sound footing and have the capacity to successfully cater the higher loan sizes.

In addition, SBP Relief Package for microfinance banks, which included deferment of principal and restructuring of microfinance loans to deal with the adverse implications of the ongoing Covid-19 pandemic, have now been expanded with three measures.

First, the relief measures that were earlier available from Feb.15, 2020 have now been allowed to borrowers who were regular on December 31, 2019. This would allow more borrowers to avail the regulatory relief who were previously not eligible.

Second, to facilitate MFBs during these testing times, the provisioning requirements have been extended by 2-months; and third, client’s consent through recorded lines has been allowed to facilitate the customers to avail the relief package.

Prime Minister of Pakistan, announced a Fiscal Package of over Rs1200 billion in the wake of Covid-19 Pandemic.

The ECC of Cabinet Division has approved the proposals on May 13, 2020. Out of this Package, an amount of Rs6.861 billion has been approved for provision of financial relief in terms of markup subsidy on Bank’s loans to the most deserving sub segment of farming community, i.e. farmers with land holding up to 12.5 acres, throughout the country.

Over 70 per cent of the farmers in Pakistan own land up to 12.5 acres.

A Mark-up subsidy at 10 per cent on the loans extended or to be extended during the fiscal year 2020-21 to the farmers of 12.5 acres of land has been approved by the Government of Pakistan.  Total amount of subsidy is Rs6.86 billion. All the loans with passbook as collateral are eligible to avail the subsidy.

Meanwhile the advisor to Prime Minister on Commerce Abdul Razak Dawood said the government is vigorously following a prudent policy to boost export and minimise import for the economic stability through offering lucrative package of incentives to industrialists and businessmen.

It was stated by him while talking to a high level delegation of United Business Group led by President SAARC Chamber of Commerce and Industry Iftikhar Ali Malik.

Razak Dawood said the government is working on short and long term policies simultaneously to boost economy besides accelerating the pace of industrialisation throughout the country on top priority.

Earlier the Minister for Information and Broadcasting Shibli Faraz says opening of tourism and various sectors of business is a welcome development.

In a tweet, he said Prime Minister Imran Khan’s strategy of taking health and economy along through smart lockdown during Covid-19 has proved successful.