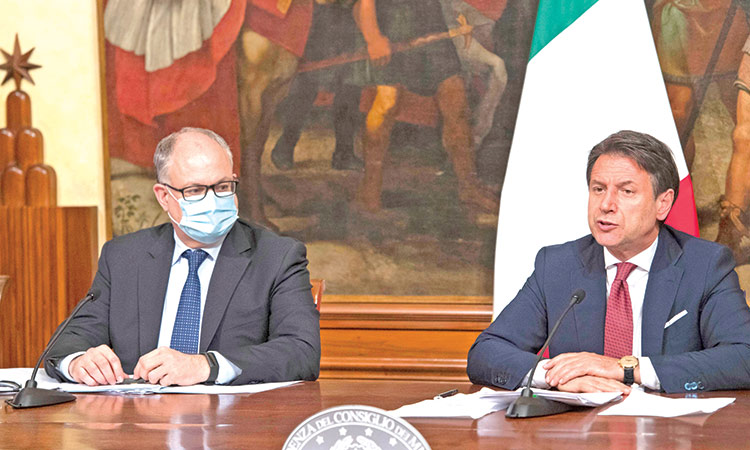 The government would use the extra spending, worth 25 billion euros ($29.5 billion), to soften the blow to an economy ravaged by lockdown measures imposed to stem the COVID-19 pandemic, which has killed almost 35,200 people.

Italy hopes to front-load this year part of 209 billion euros in grants and cheap loans it should receive from the Recovery Fund starting in 2021. The Italian economy has been among the worst hit by the crisis, facing an 11.2% contraction this year, according to European Union estimates, the sharpest fall in the 27-nation bloc.

“We have set aside 12 billion euros to support employment,” Giuseppe Conte told reporters after a three-hour Cabinet meeting.

Part of the borrowing will be used to conditionally extend temporary layoff schemes for up to 18 weeks, with firms required not to cut jobs to qualify for state aid. Companies less affected by the crisis will have to pay a contribution to apply for aid covering a period which exceeds the first nine weeks, a draft decree seen by Reuters showed.

With some 12.6 million Italian workers on furlough and facing the end of support, extending the scheme was seen as essential to avoid an immediate crisis for households and consumer spending.

Among other measures, the decree extends until January a moratorium on repayments for loans to small and medium-sized businesses and funds a four-month cut in pension contributions paid by companies on behalf of new permanent hires.

Companies based in the poorest regions in the South will benefit from a 30% cut in pension contributions for all workers, not just new hires.

The draft authorises the government to spend up to 1.5 billion euros this year to participate in capital increases at state-controlled companies. An additional 500 million euros will go to boost incentives for state-of-the-art combustion engine cars as well as electric and hybrid vehicles.

Meanwhile, Italian industrial output rose more strongly than expected in June as factories built on the exceptional surge seen in May when production resumed after coronavirus lockdown measures were eased, a data showed on Thursday.