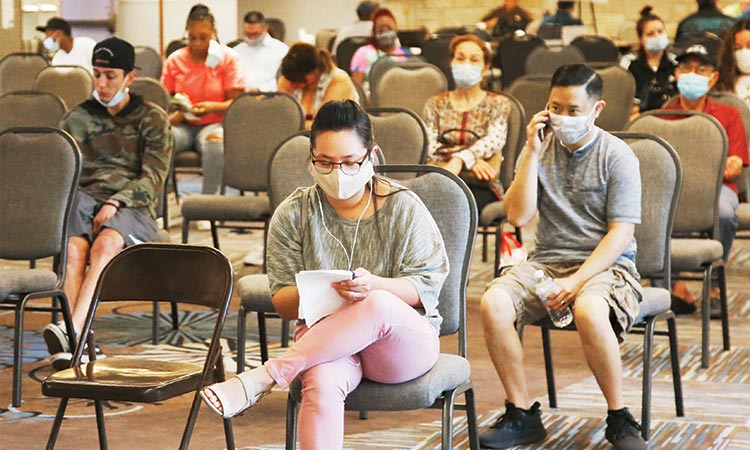 People wait to speak with representatives from the Oklahoma Employment Security Commission about unemployment claims on July 9, 2020, in Midwest City. File/ Associated Press

Safe-haven gold extended its record-breaking run, driven by expectations of more stimulus to counter the pandemic, while the dollar gained after data suggested the US labour market is stalling amid a resurgence in COVID-19 cases.

Initial claims for state unemployment benefits fell 249,000 to a seasonally adjusted 1.186 million for the week ended Aug. 1, the labour Department said, the lowest reading since mid-March.

Other data on Thursday showed a 54% surge in job cuts announced by employers in July. The reports followed on the heels of news this week of a sharp step-down in private payrolls in July and continued declines in employment at manufacturing and services industries.

Initial claims for state unemployment benefits fell 249,000 to a seasonally adjusted 1.186 million for the week ended Aug. 1, the Labor Department said. That was the lowest since mid-March. Claims remain well above the peak of 695,000 during the 2007-2009 Great Recession.

Economists polled by Reuters had forecast 1.415 million applications in the latest week.

Businesses are also cautious about hiring. Claims topped out at a record 6.867 million in late March. Some economists attributed last week’s drop in claims to the end of a $600 weekly unemployment benefits supplement last Friday. They expected further declines in the weeks ahead. Industry groups had complained the supplement was discouraging furloughed and unemployed workers from returning to their jobs.

Last week, 655,707 applications were filed under the government-funded Pandemic Unemployment Assistance program for gig workers and the self-employed among others, who do not qualify for regular state unemployment insurance. That was down 253,093 from the prior week.

Other economists, however, expected claims to remain elevated because of weak demand and the expiration of the US government’s Paycheck Protection Program that gave businesses loans that can be partially forgiven if used for employee pay.

But more than 1 million initial claims a week is not desirable if you think the economy is recovering, said Yousef Abbasi, global market strategist at StoneX Group Inc in New York. The report, he said, supports the need for stimulus.

“It puts us right where the Fed wants to be, right where you’d want to be, if you’re thinking Washington needs to get stimulus done,” Abbasi said.

The relief bill should be more targeted than the first to preserve ammunition if another shutdown should require further aid, former Reserve Bank of India Governor Raghuram Rajan told the Reuters Global Markets Forum on Wednesday.

The major US stock indices traded little changed, but bourses in Europe fell as a three-day rally ran out of steam.

Healthcare shares fell the most among major S&P sectors.

Among individual shares, Becton Dickinson and Co dropped 9.1% after posting quarterly revenue below estimates as delayed elective procedures during coronavirus-led lockdowns squeezed demand for some of its devices.

Treasury yields fell, with the 10-year note sliding to 0.504% at one point, its lowest ever after a big down spike on March 9. The benchmark note last yielded 0.5232%.

The weak dollar/strong euro trend will continue into next year, a Reuters poll showed, on expectations the US economic recovery is flagging, especially compared with Europe.

The British pound rose to a five-month high against the dollar after the Bank of England left interest rates at 0.1% and warned about possible risks from taking rates below zero.

Spot gold prices rose $19.7201, or 0.97%, to $2,059.12 an ounce.Gold has rallied more than 35% this year as it is considered an asset that should hold its value while the pandemic and money printing by central banks erode the value of others.

Oil prices hovered near five-month highs as support from a weak dollar and falling US crude inventories countered bearish sentiment on fuel demand. 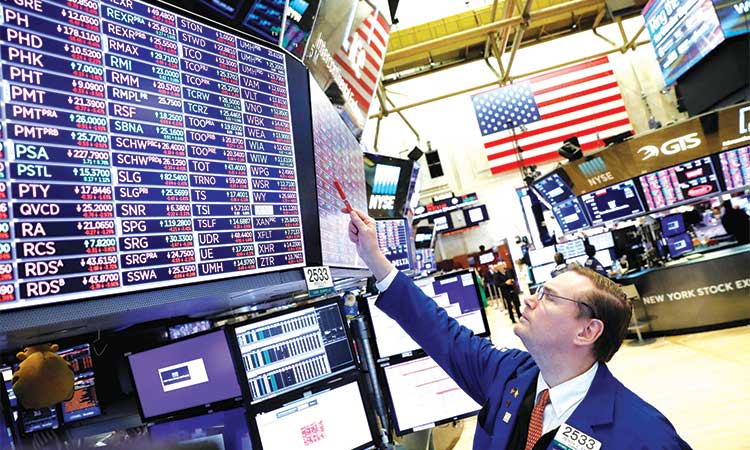 Stock markets and oil prices collapsed on Friday as investors panicked over the devastating damage of the coronvavirus to global economic growth, dealers said.