Dollars on shaky grounds due to pandemic. File

The US dollar gave up brief early gains on Monday as mounting concerns about a slowing US economic recovery from the coronavirus pandemic hobbled the currency after a brief rebound late last week.

The common currency hit a speed bump on some technical signs of being over-bought in the near-term, and with speculators' long positions hitting a record level, said Minori Uchida, chief currency analyst at MUFG Bank.

"But the dollar's decline is likely to continue. Real US interest rates are declining even as the country is running a big current account deficit, a situation we hadn't have for a long time," he said.

US bond yields have fallen to their lowest level since the pandemic-induced market turmoil in March, with the 10-year rate slipping to near 0.50%, undermining the yield attraction of the dollar.

US bonds looked even less attractive when adjusted for inflation expectations, with the yield on inflation-protected US 10-year Treasuries falling to a record low below minus 1%.

Investors have reasons to worry about the US outlook as policymakers have so far struggled to clinch a deal to pump more money into the world's largest economy even as an expanded unemployment benefit, worth about $75 billion per month and accounting for nearly 5% of personal income, expired on Friday.

White House Chief of Staff Mark Meadows said on Sunday he was not optimistic on reaching agreement soon on a deal for the next round of legislation to provide relief to Americans hit hard by the coronavirus outbreak.

A growing US fiscal deficit to finance the stimulus prompted Fitch Ratings to revise the outlook on the United States' triple-A rating to negative from stable.
While the market has not shown immediate reaction to the downgrade, it still marked a sharp contrast with the European Union, which got a lift from Standard and Poor's decision to upgrade its rating outlook to positive from stable.

Sentiment on the euro has improved after European Union leaders agreed last month to a 750 billion euro economic recovery fund - while also taking on debt jointly in a major boost to regional cooperation.

The deal could be conducive to a shift to the euro, at the expense of the dollar, among managers of official currency reserve, said Zach Pandl, co-head of global foreign exchange at Goldman Sachs in New York.

"Prospects for the euro in reserve portfolios are looking brighter. In particular, the EU's new Recovery Fund addresses two fundamental problems that have held back the internationalization of the single currency - macroeconomic instability due to limited fiscal transfers, and a shortage of highly-rated liquid bonds." he said.

Some traders speculate the dollar's decline since late last month has been so big that it may have been driven in part by reallocation of official reserves.

Traders are also keeping an eye on intensifying tensions between Washington and Beijing on many fronts, including trade, technology and geopolitics. 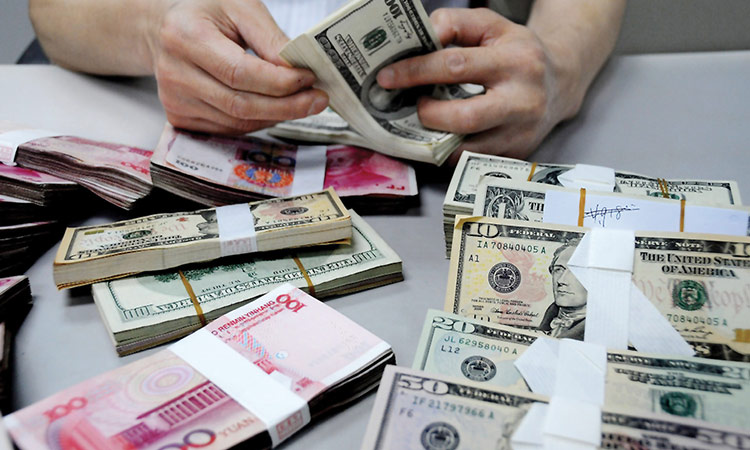