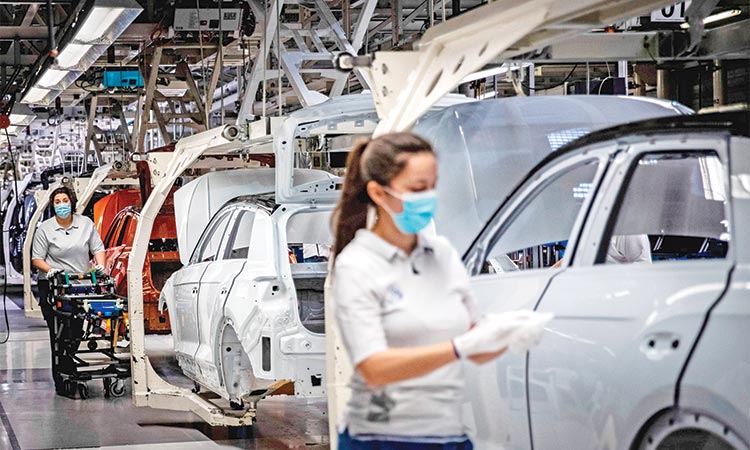 Employees at a car factory in Palmela, Portugal. File/Agence France-Presse

Portugal’s gross domestic product (GDP) shrank 14.1% in the second quarter of 2020, the biggest contraction ever, as lockdowns imposed to contain the spread of the coronavirus hit key sectors of the economy.

In a flash estimate, the National Institute of Statistics (INE) said that between April and June this year, the country’s GDP plunged 16.5% compared with the same period in 2019, affected by collapsed private consumption, investment and exports.

“It is a number which will be remembered in the history of Portuguese economy, a consequence of strong confinement, particularly between mid-March and the end of April, which affected almost all economic sectors,” said Filipe Garcia, economist at Informacao de Mercados Financeiros consultants.

Portugal’s two largest trading partners, Spain and Germany, also recorded major contractions in GDP in the second quarter of the year, 18.5% and 10.1% respectively.

In yet another sign of weak domestic demand, INE said consumer inflation fell 1.3% in July after growing 0.9% in June.

The country had seen some of its strongest growth streaks in the past few years after leaving behind the 2010-13 economic and debt crisis.

Last year, Portugal’s GDP grew 2.2% while unemployment was 6.5%, near record lows. But the economy depends on tourism, which accounts for up to 15% of GDP and has suffered from the coronavirus lockdowns in Portugal and abroad.

The coronavirus is set to leave long-lasting scars on the country’s economy, with the Bank of Portugal predicting Portuguese GDP will contract 9.5% in 2020, the biggest recession in a century. The government estimates it will fall 6.9%.

The pandemic is also threatening Portugal’s unemployment rate, which rose to 7% in June from a revised 5.9% in May as tens of thousands of jobs were wiped out by the coronavirus.

But the overall number is likely to be substantially higher. Many workers stopped looking for jobs in the lockdown, meaning they were left off unemployment statistics.

The southern Algarve region, usually packed with visitors but now nearly deserted, was badly hit, with the number of registered unemployed in June jumping 231% to more than 26,000 people.

Portugal, which has reported a total 50,868 coronavirus cases and 1,727 deaths, began lifting its lockdown on May 4, but localised outbreaks in and around the capital, Lisbon, have worried authorities at home and abroad.

Meanwhile, three companies who dominate Portugal’s mobile phone market said they would not use Huawei technology in their core 5G networks despite the government not banning the Chinese group from supplying critical infrastructure.

NOS, Vodafone and Altice - which together serve nearly 100% of Portugal’s mobile customers - all said they had decided not to use Huawei kit in the core systems of their 5G networks, which covers servers, gateways and routers that forward traffic to the antennas.

The question of whether or not to use Huawei for next-generation mobile networks has become a major issue in Europe amid intense diplomatic pressure from the United States to ban the Chinese group.

The Portuguese government has so far not taken a stance, but Infrastructure Minister Pedro Nuno Santos told Reuters it has “no ‘a priori’ issues with any manufacturer.”

Nuno Santos revealed that a group created by the Portuguese government to assess risks and cybersecurity issues relating to 5G had completed its work and had not drawn any conclusions directed against any particular supplier.

Huawei did not immediately reply to a request for comment.

A NOS spokeswoman said the company “will not have Huawei equipment in its core network” and will choose the “best partners” for each of the network’s components.

Vodafone Portugal “has been working on preparing its 5G network with its preferred and historic partner Ericsson,” the spokeswoman said. 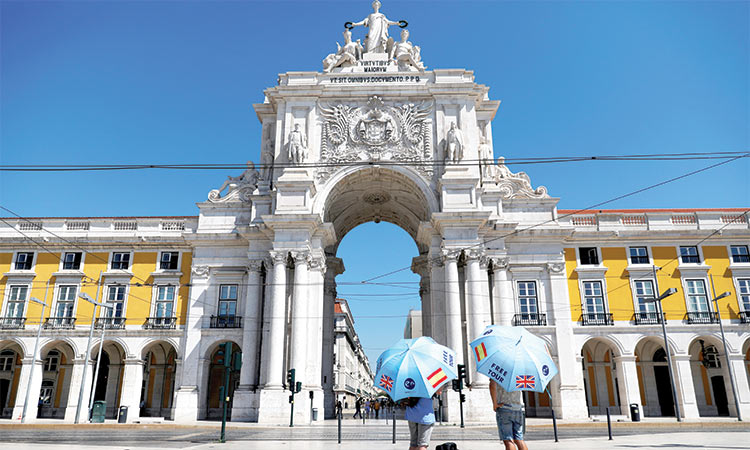 Portugal’s record economic contraction in the second quarter saw exports of goods and services plunge by 40% as the coronavirus eroded revenue from overseas tourists, a breakdown of official GDP data showed.