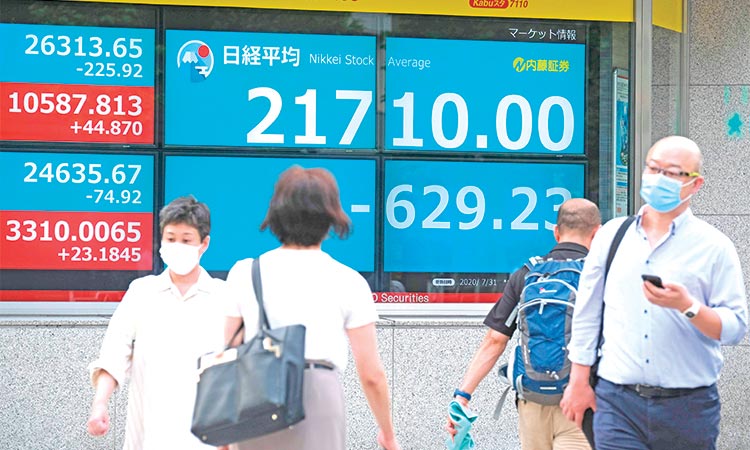 Pedestrians walk past a board displaying share prices in Tokyo on Friday. Agence France-Presse

The yen’s recent appreciation comes as the world’s third-largest economy has been bottoming out from its deepest postwar slump, with authorities juggling a restart of economic activity with efforts to prevent a second wave of coronavirus infections.

The currency had been stable at around 107 yen to the dollar under Prime Minister Shinzo Abe administration, Aso told reporters after a cabinet meeting.

“Stability is important, so I’m closely monitoring it with a sense of urgency.”

The dollar hit a 4-1/2-month low of 104.195 yen on Friday as investors worried that a recovery in the US economy could be stymied by a second wave of coronavirus.

“The government and the Bank of Japan (BOJ) will keep a close watch on underlying market and economic trends and tackle as one as needed,” Kenji Okamura, vice finance minister for international affairs, told reporters after a routine meeting with officials from the central bank and the Financial Services Agency.

A Japanese government panel acknowledged on Thursday that the economy peaked in October 2018 and fell into recession, suggesting it was struggling long before its more recent coronavirus slump.

“We have taken steps to support domestic demand rather than external, helping employment and household income improve, which led to a moderate economic recovery,” Aso said.

Aso said exports accounted for less than 20% of Japan’s economy, shrugging off any immediate impact from the yen’s rise but the fact that he warned against the currency’s gains underscored authorities’ struggle to boost external demand.

Japanese authorities tend to fire warning shots against excessive currency volatility and disorderly moves at a time of market strains.

Tokyo has stayed out of the currency market since 2011 when it intervened heavily by selling the yen to prevent a strong currency from hurting an economy facing damage from a devastating earthquake, tsunami and nuclear disaster.

Japan on Friday pushed back its estimated return to a budget surplus by two years, due to the massive increase in spending needed to support the economy during the coronavirus and putting pressure on the nation’s massive debt burden.

The country faces the challenge of restoring fiscal health as even as some policymakers call for more spending to deal with the pandemic.

The government has delayed its forecasts for achieving a surplus to the fiscal year starting April 2029 from the previous projection of fiscal 2027 made in January.

In its twice-yearly fiscal and economic projections, the government expected the primary budget, excluding new bond sales and debt servicing, to swing to a surplus of only 300 billion yen ($2.87 billion) in the fiscal year 2029.

The government has so far compiled a combined stimulus spending worth $2.2 trillion to soften the hit from the coronavirus outbreak.

Japan’s worsening fiscal health highlights the difficulties for policymakers as they try to boost the economy from a sharp slump due to the pandemic, while fighting to curb the spread of the virus.

The government forecasts real gross domestic product (GDP) to shrink 4.5% for the current fiscal year to March 2021, the fastest contraction since comparable data became available in 1994, and sharply down from its previous 1.4% growth projection made in January.

The economy then is expected to rebound 3.4% for the next fiscal year, according to the estimate. The latest estimate also showed nominal GDP will grow to 600 trillion yen by fiscal 2023, later than the original target of around 2020.

A panel of seven economists on Thursday declared a tentative end to the economy’s second-longest boom and entered “recession” in late 2018, suggesting it was struggling long before its more recent coronavirus slump.

Meanwhile, Japanese shares closed lower on Friday as the safe-haven yen strengthened on dismal US data, while the resurgence of COVID-19 cases dampened hopes of a swift economic rebound. The Nikkei share average ended 2.82% lower at 21,710.00, the biggest daily loss since June 15.

The index was down 4.58% for the week, the worst since early April. The 2.59% decline in July was its first monthly loss since March.

The broader Topix closed down 2.82% at 1,496.06, hitting its two-month low and the biggest daily losses in four months. 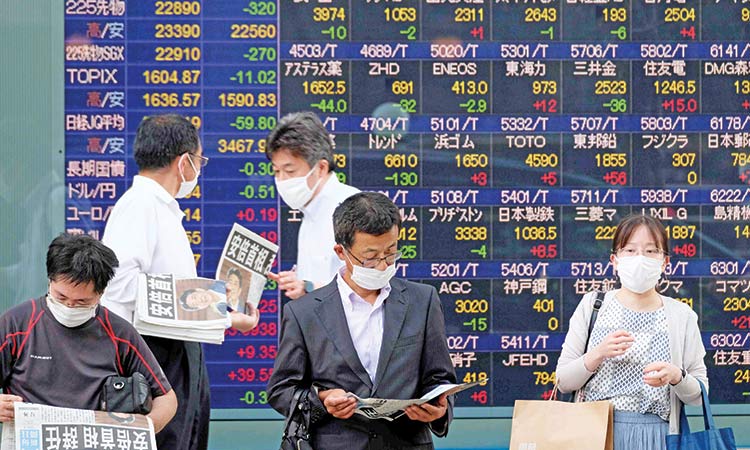 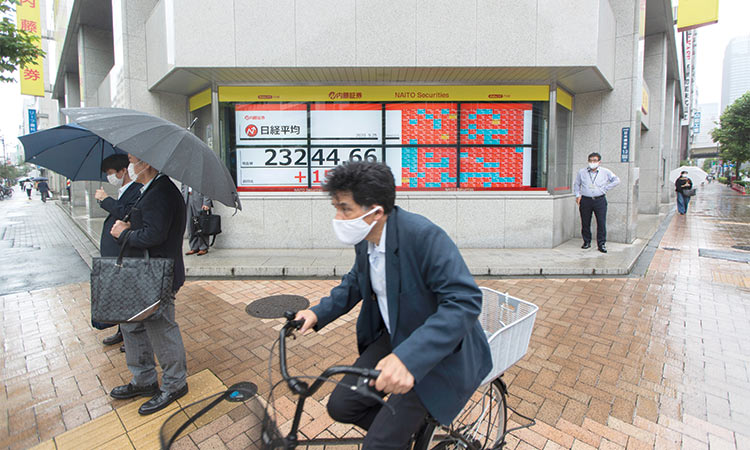