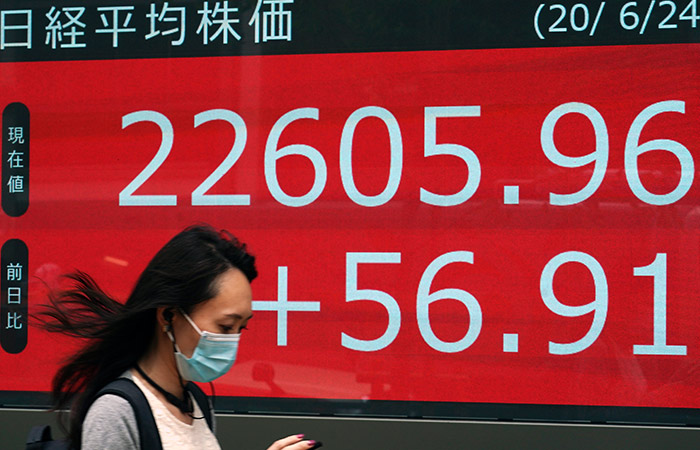 Tokyo stocks closed lower on Wednesday, with investor sentiment dampened by a strong yen and declines on Wall Street.

"The yen's rise is one negative factor" although the current rates were not yet at a devastating level for Japanese exporters, said Makoto Sengoku, market analyst at Tokai Tokyo Research Institute.

"The drops in US stocks weighed more heavily on sentiment... The market would need fresh positive news to stage a rebound," he told AFP, citing progress on developing vaccines for the new coronavirus as an example.

Wall Street stocks finished decisively lower on Tuesday as legislators in Washington appeared far apart on another round of fiscal support for the coronavirus-battered economy.

The global economic outlook also remains clouded with resurgent COVID-19 infections in Asia and Europe -- on top of the already high number of new cases in the US -- and new containment measures.

European shares close higher as focus turns to US stimulus

The dollar was hovering around 105 yen, sharply lower than the 106-107 range seen a week earlier.

Investors were now waiting for earnings results of giant tech companies in the United States on Thursday as well as the outcome of the US Federal Reserve meeting to be wrapped up on Wednesday.

"No change is expected, though (Fed chair Jerome) Powell's press conference 30 minutes after the decision will be closely watched," said Tapas Strickland, director of economics at National Australia Bank.

Industrial robot maker Fanuc sank 7.7 percent to 18,700 yen while McDonald's Holdings Japan dropped 7.56 percent to 5,260 yen after its US parent announced sharp profit falls and plans to sell part of its stake in the Japanese unit.