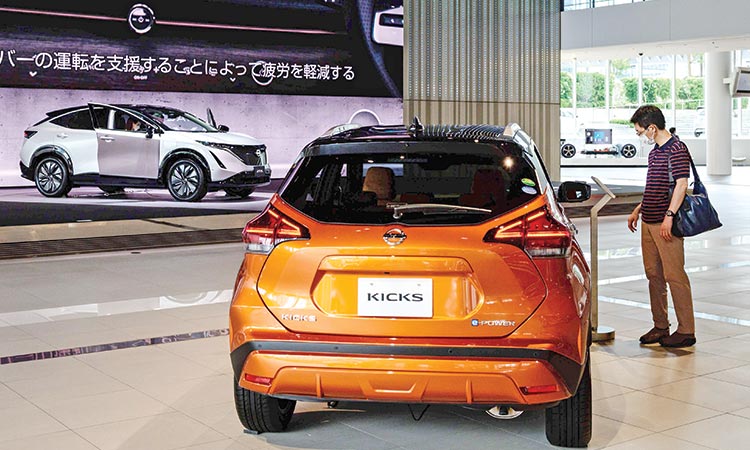 Display cars at a Nissan showroom in Yokohama, Japan, on Tuesday. Agence France-Presse

Nissan Motor forecast on Tuesday its biggest-ever annual operating loss and said it expects vehicle sales to tumble 16% as the coronavirus pandemic hampers the company’s efforts to turn around its business.

Japan’s No. 2 automaker forecast an operating loss of 470 billion yen ($4.5 billion), much larger than a Refinitiv consensus estimate of a 262.8 billion yen loss and its second straight year of losses.

Japan’s Mitsubishi Motors faced doubts about a quick recovery after posting dismal quarterly sales in its key Southeast Asia market partly due to the coronavirus outbreak, sending its shares down 13% to a record low on Tuesday.

Nissan predicted revenue would plunge by a fifth to 7.8 trillion yen.

Years of aggressive expansion, particularly in emerging markets, has left Nissan with dismal margins, an ageing portfolio and a tarnished brand. Still reeling from the 2018 arrest and ouster of former CEO Carlos Ghosn, it unveiled a far-reaching restructuring plan in May that calls for a dramatic reduction in production lines and its vehicle model range.

In the first quarter, Nissan posted an operating loss of 153.9 billion yen, its second consecutive quarterly loss after falling 94.8 billion yen into the red in January-March. “The results for the first-quarter and the full year outlook look challenging, but are within our expectations,” Chief Executive Makoto Uchida told a livestreamed media briefing while noting the company was facing a “tough year”.

Global vehicle sales tumbled 48% to 643,000 units in the April-June quarter as sales halved in North America, a key market. Sales in China fell 40%.

Nissan’s woes have highlighted the fragility of its automaking partnership with France’s Renault which has also announced a major restructuring as it rows back on policies pursued by Ghosn, now a fugitive wanted on charges of financial misconduct in Tokyo. Ghosn denies the charges.

Mitsubishi Motors, a junior partner in the three-way alliance, saw its shares tumble some 13% on Tuesday after sales in Southeast Asia plunged 70% during the April-June quarter.

A day earlier, Mitsubishi Motors, a junior member of the auto alliance of Nissan Motor and Renault, reported that sales in Southeast Asian countries, which normally account for a quarter of its global sales, plunged by a sharper-than-expected 68% to make up just 17% of total sales during April-June.

The automaker has bet on growth in Indonesia, Philippines, Thailand and Vietnam where it has dominated bigger rivals, and which have felt the brunt of the coronavirus pandemic later than China and other countries.

As a result, some experts say that Mitsubishi’s sales recovery may lag other automakers’ and complicate a restructuring plan that it detailed on Monday.

“ASEAN was meant to be its growth driver and was even positioned as its key attractive point to the Renault-Nissan Alliance. ASEAN sales have collapsed and it is now generating losses,” Kato said in a note to clients, referring to Southeast Asia.

Globally it sold just 139,000 vehicles in the April-June quarter, a 53% tumble from a year ago. To preserve cash, the automaker said it would not pay a dividend this year.

Mitsubishi’s shares closed down 12.6% at 235 yen after falling as low as 234 yen, a lifetime low since their 1988 listing. The shares have nearly halved this year.

Hisashi Arakawa, deputy head of investment management at Aberdeen Standard Investments in Tokyo, said Mitsubishi Motors’ difficulties also stood in contrast to those of some other Japanese car makers, especially Toyota Motor Corporation, which were doing relatively well in the pandemic by increasing market share in several markets.

“On top of big losses, cuts in dividend may have contributed to the fall in its shares,” he added.

Some analysts were sanguine about the company’s longer-term outlook and backed its recovery strategy.

“In the short term Southeast Asia is not going to work that well for them, but in the longer term it’s the right thing for them to do,” said Chris Richter, deputy head of Japan research at CLSA.