European shares close higher as focus turns to US stimulus 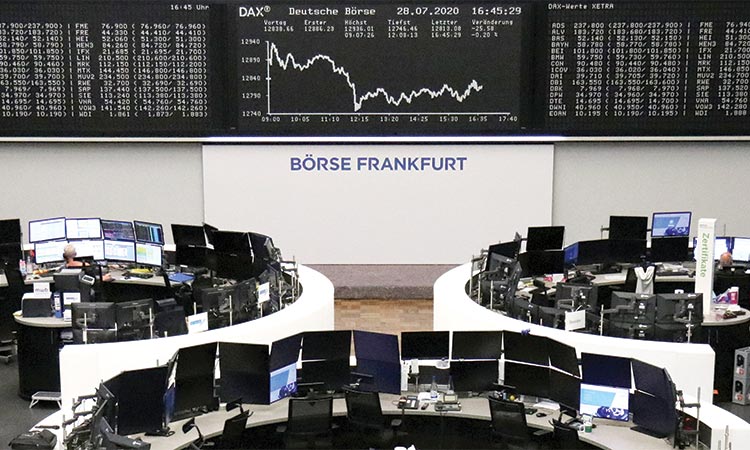 The German share price index DAX graph at the stock exchange in Frankfurt on Tuesday. Reuters

European shares closed modestly higher on Tuesday, as investors assessed a batch of mixed earnings reports while holding out for more US stimulus to limit the economic damage of COVID-19.

The pan-European STOXX 600 rose 0.4%, with defensive sectors such as healthcare, food & beverage and utilities boosting the main index. Travel stocks rebounded from losses on Monday when worries of a resurgence in coronavirus cases in Europe hit risk sentiment.

Investors awaited the conclusion of a US Federal Reserve meeting on Wednesday, when policymakers are expected to reiterate their supportive stance as talks loom over another round of fiscal stimulus for the US economy.

Gucci owner Kering and France’s Hermes slipped over 2%, while Moncler, which makes luxury puffer jackets, shed 4.4% after reporting a first-half operating loss for the first time in its history.

Profits for companies listed on the STOXX 600 are expected to drop by a record 59% in the second quarter, according to Refinitiv data.

But with much of the decline priced in, European stocks are on course to end July with gains, supported by a European Union deal to jointly issue bonds to combat the economic fallout of the pandemic and hopes of a COVID-19 vaccine.

Peugeot maker PSA Group rose 2.4% as it held on to its margin target despite a fall in profitability in the first half of 2020.

British housebuilders jumped 2% after a report that the UK government is drawing up extension to its Help to Buy scheme, which makes it easier for first-time buyers to afford a home.

Gold chalked up another record peak on Tuesday before pulling lower as the dollar clawed back earlier losses, while US equity markets struggled with mounting coronavirus fears, dealers said.

With fresh infection spikes in Asia and Europe -- on top of the already high number of new cases in the US -- and new containment measures, the global economic outlook remains clouded.

Virus uncertainty combined with China-US tensions sent gold soaring nearly 30 per cent this year -- and on Tuesday it struck another record pinnacle at $1,981.27 per ounce in Asian trade.

That smashed the previous day’s peak, but the precious metal later pared its gains.

Some observers still predict $2,000 could be broken as early as this week.

In the meantime, the focus is on the US Federal Reserve’s policy meeting this week, which is tipped to result in more easing measures to support the world’s top economy.

On Wall Street the Dow was down by fewer than 100 points approaching midday in New York, while key European markets gave a mixed picture at the close.

Most Asian stock markets had earlier made gains after overnight strength on Wall Street.

Equity markets remain underpinned by hopes that US lawmakers can hammer out a new economy-boosting stimulus programme as their previous multi-trillion-dollar package begins to dry up.

Oil prices fell around 1% on Tuesday, as US lawmakers prepared to wrangle over an economic stimulus package and investors worried about a rise in coronavirus cases worldwide.

US Republicans unveiled a new coronavirus relief proposal on Monday, four days before millions of Americans lose expanded unemployment benefits. On Tuesday, they faced difficult talks with Democrats on how best to recover from the coronavirus pandemic.

Also a negative for prices, US consumer confidence ebbed in July amid a flare-up in COVID-19 infections across the country.

Global air traffic:  Global air traffic will not return to levels seen before the coronavirus pandemic until at least 2024, the International Air Transport Association (IATA), said on Tuesday.

Uncertainty about the timing of border reopenings is the main factor, IATA’s chief economist Brian Pearce told a news conference.

“We now are expecting 2019 levels not to be reached until 2024 which is a year later that what we had previously expected,” he said. The outlook depends on how countries manage “to control the virus”, he said. New British restrictions on travel with Spain had “created a lot of uncertainty”, he said.

Any recovery in the second half of the year would be “slower than we hoped” after a weaker-than-forecast rebound in May and June.

Because of rising COVID numbers in some countries, the reopening of international borders would take longer than previously forecast, he said.

For 2020 as a whole, IATA now expects a 63-per cent drop in air traffic, worse than its previous forecast of 55 per cent, Pearce said.

IATA, which groups 290 airlines, projects their income to be amputated by half this year compared to 2019.