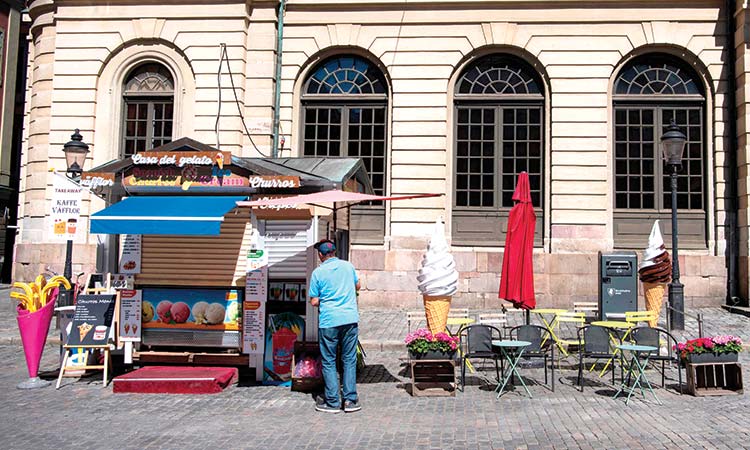 A closed ice cream stall outside the Royal Palace in Stockholm, Sweden, on Wednesday. Agence France-Presse

Denmark, Norway and Sweden face among their worst economic downturns on record this year due to the COVID-19 pandemic, but will largely recover the lost ground in 2021, according to a Reuters poll of economists.

The economic hit on Nordic countries (Nordics) looks slightly worse than was expected in an April poll, with much of the region on course to see the biggest contraction in a single year since World War Two.

The region’s export-oriented economies are built on trade, and major exporters like truckmaker AB Volvo, shipping giant Maersk and oil company Equinor have been hamstrung by the pandemic, which closed businesses and disrupted global supply chains.

Sweden and Norway’s gross domestic product is likely to contract by 5.0% and 4.5% respectively in 2020, according to median predictions in the July 21-23 poll, the biggest drop since World War Two. Denmark’s economy is expected to shrink by 4.3%, its worst contraction since the financial crisis in 2009.

Governments and central banks have pumped money into their economies in a bid to fight the crippling effect of the pandemic. Norway cut its key interest rate to a record low in May, while Sweden’s Riksbank has vastly expanded bond-buying schemes and kept its key rate at zero.

Yet a rapid turnaround is forecast for 2021, better so than expected in an April poll, with percentage growth rates almost matching this year’s losses as restrictions are lifted and the effects of fiscal stimulus kick in.

Sweden is predicted to grow 3.9% next year, Norway 4.0% and Denmark 3.8%, although job growth looks slow, with the forecasts showing only minor falls in unemployment between 2020 and 2021.

Although the region has suffered economically from the pandemic, it is doing better than many other countries in Europe and beyond, said Robert Bergqvist, chief economist at SEB bank.

However he warned predictions for 2021 were “surrounded by great uncertainty”, with variables including how other parts of the world fared and whether there was a second wave of coronavirus infections in the coming winter.

“How Europe, the U.S and Asia recover is very important for the Nordics, as the region is dependent on the global economy,” he said, adding that the Swedish government was likely to announce further stimulus packages in September.

“Sweden is hoping that it would be less impacted by a second wave,” Bergqvist said, referring to the country’s decision to forego a national lockdown, in contrast to the rest of the region.

Access to a vaccine is what will be most crucial, he added, as that would help recovery in other countries that the region exports to and trades with.

The poll was of 29 economists for Sweden, 26 for Norway and 15 for Denmark.

Norway will re-impose a 10-day quarantine requirement for people arriving from Spain from Saturday after a surge in COVID-19 cases there, while it will ease restrictions on people coming from more counties of Sweden, the government said on Friday.

Residents of the European Union, European Economic Area or Schengen countries with fewer than 20 confirmed cases per 100,000 inhabitants over the last two weeks are able to enter Norway without being required to go into self-quarantine.

The latest data from the European Centre for Disease Prevention and Control (ECDC) showed COVID-19 infections in Spain had risen to 30.9 per 100,000 inhabitants.

The Spanish Foreign Ministry did not immediately respond to a Reuters request for comment.

There were about 12,000 Norwegians on holiday in Spain, according to Norway’s public broadcaster NRK. Those who returning from Saturday onward will have to go into quarantine.

Budget airline Norwegian Air, which had to restructure its debts and seek financial support from the government after the pandemic shut down most air travel in March, said it was operating flights to Spain as normal.

“We’re still operating according to the previously announced schedule, so no changes. We’re continuing to monitor the situation closely,” a spokeswoman said in an email to Reuters.

In June, its passenger volumes were down 96.7% from a year ago as most of its fleet was grounded, but the company started more flights in July. 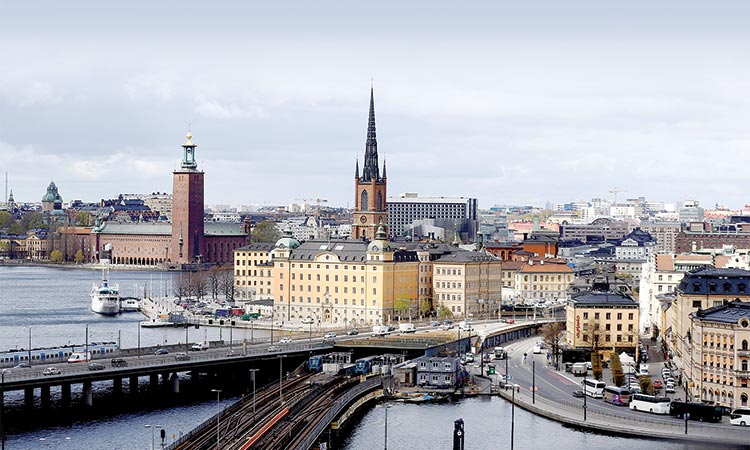 Sweden's gross domestic product will shrink around 4.6% this year, the government said on Monday, outlining a budget bill that will pump around 105 billion crowns ($12.0 billion) into the economy to kick-start growth following the pandemic.

The data indicated concerns of market overheating. Svensk Maklarstatistik, an association of real estate agents, added that the rise was a record from when it started collecting data in 2005. 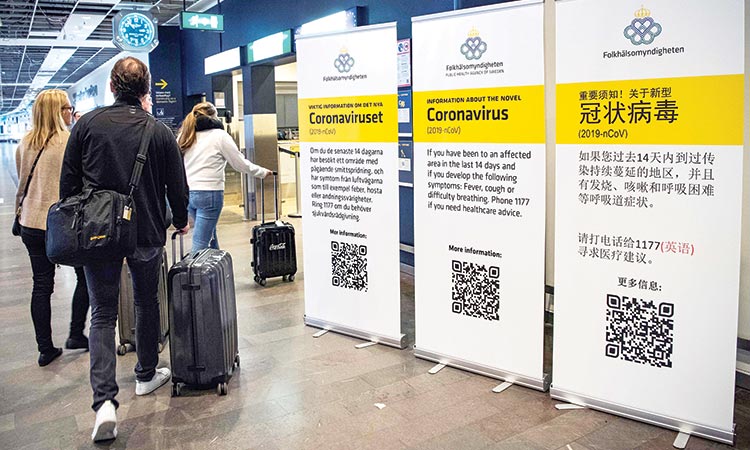 Sweden slashes growth outlook for 2020 due to coronavirus

The coronavirus outbreak will lower Swedish growth this year by around 0.3 percentage points, Finance Minister Magdalena Andersson said, adding the impact could be greater if the outbreak is longer lasting or more widespread than currently expected.